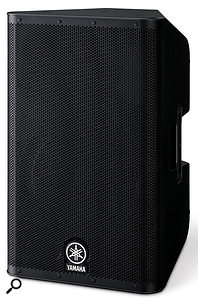 The recently introduced DXR range of self-powered loudspeakers has been produced in collaboration with the famous Nexo company, whose audio pedigree is well known. The range comprises four sizes of two-way, active designs, offering a choice of 8-, 10-, 12- and 15-inch LF drivers. All models are powered by a Class-D, bi-amplified module rated at 700W continuous power (or 1100W 'dynamic'), and they all incorporate 48-bit digital signal processing and protection. Two DXS subwoofers are available, and these are designed to work with the DXR full-range speakers.

The DXR range sits just below the established DSR range in the Yamaha stable, and in return for a lower price point you get slightly less power and traditional, but still bespoke, ferrite loudspeaker technology (the DSR speakers use neodymium magnets). All the models share the same external styling and amp module, and the extensive on-board DSP is used to optimise performance, taking the different sized drivers and enclosures into account.

I was able to take a closer look at the DXR12 and the DXR15 versions, and, as it happened, I had a very suitable live event coming up...

I unpacked the DXR12s first and hooked them up straight away, so the rear-panel connections and controls were first on my agenda. The three-channel input section is a useful feature of the DXR series, and is common to all models in the range. Channel 1 is the main input, and accepts either line or mic signals on a balanced XLR connector. I'm always very wary of these dual-sensitivity inputs on powered speakers, as accidentally selecting 'mic' when the speaker is receiving a healthy line-level input is definitely something to be avoided! Thankully, on the DXR series, this mic/line selector is a decent-sized slide switch that isn't likely to be accidentally moved, and it's easy to see what position it's in — a lot better than a tiny in/out button, which is the case with some brands. Channel 2 has a pair of unbalanced standard jack inputs, and Channel 3 is equipped with RCA phono inputs. Each input has its own level control, and the overall mix output is presented as a balanced line-level signal at the Link Out XLR. What's unusual about this feature is that it can be configured as a full-mono or half-stereo feed. When switched to mono mode, the link output just provides the same mix as is being sent to the DXR's internal amp (ie. a mono mix of all three input channels), but in stereo mode the signals coming in to inputs 2 and 3 are split so that the left channel is routed internally and the right channel is sent to the remote (linked) speaker — very neat, and just right for, say, a solo singer using a stereo backing track and a single live microphone. The only shortcoming of the input section is the lack of a balanced (TRS) jack line input. Input 2 has only unbalanced jacks, and it would be nice to see a 'combi'-type input on channel 1 that could accommodate XLR or TRS connectors.

Other neat ideas in the mixer section include a contour switch, which offers two preset EQ options (for use as either a main speaker or monitor), and a high-pass filter, which can operate at either 100Hz or 120Hz (for use with a DXR subwoofer). The contour circuitry is dynamic in nature, and will automatically adjust the EQ boost levels relative to the overall level going through the speaker. I experimented with various combinations of these settings and achieved very pleasing results with the contour switch applied in its 'FOH/Main' position for playback material, whereas for straight live vocal use I found more clarity and presence with this switched out. 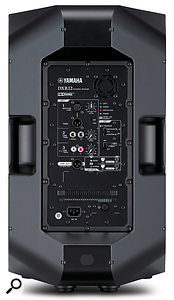 A significant benefit of self-powered speakers is that they have built-in protection, and the DXR series is well provided for in this department. There's a limit indicator, which kicks in to protect both drivers and amplifiers by reducing the input to the amp section. In the case of more serious issues, such as overheating, DC on the output, or excessive current being detected, the output will be completely muted (this also applies at switch-on and in the case of power loss).

The overall panel layout and appearance is neat and tidy, and is spacious enough that all the controls and labels can be easily seen and operated. The DXR speakers are fan cooled, which means that there is no external heat sink other than the panel itself. The fan is pleasingly quiet, and although you would probably just be able to hear it in some small-scale audio-visual applications, it wouldn't be noticeable at all in a concert situation. The cooling arrangement seems to be more than adequate, and the back panel stayed cool even after several hours of continuous use.

I have always liked the somewhat understated, discreet styling of Yamaha products, and the DXR range is no exception. The DXR12 and DXR15 cabinets have clean, straight lines, and the DXR12 in particular sits very nicely as a floor monitor. The moulded enclosures are made from ABS, which has a smooth, matte-black finish, and they feel sturdy and don't suffer from rattles and creaks. The steel grille that covers the entire front area doesn't have any bracing behind its flat surface, and it looks a bit vulnerable — I'd be tempted to transport these in a padded bag to protect the finish, and with some kind of solid panel to protect the front.

Behind the grille is a fairly discreet LED that indicates power on, and glows brighter when limiting is detected, giving a useful front-view indication that the levels are too hot. In some applications (such as theatre and audio-visual work), I find front-mounted indicators can be distracting, but this one can be disabled by a switch on the back.

One of my favourite features is the dual-angle pole-mount socket, which allows the speakers to be mounted vertically (ie. firing straight ahead) or angled downward to concentrate their field of fire on the audience area. Another excellent physical feature is the provision of large aluminium side-handles, which are comfortable to use and make lifting and positioning the speakers a straightforward task. It may seem like a minor point, but even the vertical orientation of the handles' grip bar is a blessing, as it allows the unit to be carried upright without twisting your wrist through 90 degrees, or just as easily on its side, like a wedge monitor. At 19.3kg, the DXR12 is easy to manage, and the DXR15 isn't much heavier, at 22.5kg. 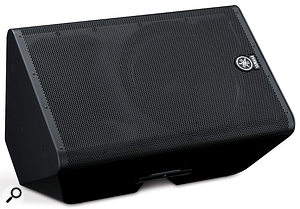 The rear of the DXR cabinets is angled, allowing the speakers to be used as floor monitors if required.

When I fired up the DXR12 speakers in my workshop area, I was immediately taken by their smooth, warm character and well-balanced sound with playback material. I listened to all my favourite test tracks, and even in a comparison with my current favourite three-way speakers, I really liked the evenness and mid-range clarity. There was no hint of unpleasant harshness or over-hyped top end, and for a two-way design I felt that the mid-into-high transition was particularly good, with very smooth and clear performance in the critical crossover area.

The bass end was also very well controlled, with plenty of lower-mid extension that stood up well to some loud orchestral 'pops' and film scores. At close range, I didn't find a lot of difference between using the DXR12s on stands and simply sitting them on top of some other unconnected boxes to get them at a good listening height, and in monitor position they were very clear and controlled, and exhibited excellent vocal clarity. It's not often I like the sound of full-range speakers straight out of the box to this extent, but after listening to them for under a minute, I was certain I would welcome them into my inventory. I ran the speakers at low and medium levels for a while before turning up the wick, and they remained perfectly well-mannered even when pushed almost to limiting — and there's plenty of power output available, with a measured maximum SPL of 132dB. The built-in multi-band dynamic processing keeps everything clean and ensures that the drivers can handle what the amp is putting out at high levels, and the result is that the DXR12s don't sound as if they're trying all that hard, which is reassuring.

I tried the DXR15 models next and these, unsurprisingly, sounded very similar in the mid-range and highs, but the extra bass was impressive in that it didn't sound overdone, just somehow fuller and naturally deeper. When it came to taking them out for a live event, I chose the DXR12s, as they would only be used on vocals, and also I was going to be rigging them up on my own.

The 200-seater venue was blessed with the usual mix of large parallel surfaces and a hard shiny floor, and the performance layout dictated that the speakers had to be stand-mounted as close to the side walls as possible — a relatively easy task, thanks to the good cabinet design and high-quality mounting sockets. I found the angled pole-mount sockets very useful here, and changing from 'normal' position to using the seven-degree downward tilt significantly improved clarity and gave a balanced coverage throughout the audience area.

Although the DXR12s were only to be used as a vocal PA, it was quite a challenging application, as there was a 20-piece band providing the backing, and they weren't holding back during the louder numbers... It turned out to be a good test for the speakers, as we had a female vocalist, a male vocalist, and then a group of nine singers trying to sing over the band in the show finale. Both myself and a friend who 'does sound' were very impressed with the performance of the DXR12 system, which belted out power songs, swing numbers and in-your-face pop covers with ease. And at the end of the night, the rear panels were still cool to the touch, and packing away was painless.

I listened to the DXR12s again in my workshop, before re-packing them for shipping, doing one final comparison against my three-ways just to be sure — and yes, I still liked everything about them. By way of a last test I hooked them up with some subs (unfortunately I wasn't able to get hold of the matching DXS subs) and gave the system a good 20-minute, doors-locked, earplugs-in hammering, with impressive and smile-inducing results. These little speakers can deliver a big punch if asked to do so, and what's so impressive about them is their ability to play it cool or hot, gentle or aggressive, depending on the material. They're ideal for portable playback, great for vocals, and the larger DX15 is well able to handle band PA duty without using subs unless you're aiming for maximum output.

Compact and clean-sounding, these speakers are great for music playback and vocal duties, with the DXR15 also being easily capable of handling full-band PA work.