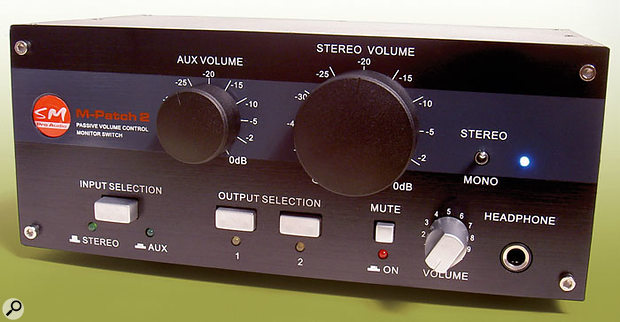 Most mixing desks offer some kind of monitor level-control but as more people move towards in-the-box mixing, demand for dedicated monitor controllers is growing. Quite a few such controllers are now available, ranging in price from £80 to well over £1000, but all do essentially the same thing: they sit between the output of your audio interface and your amp or active speakers to provide you with a handy, analogue level-control. Some perform this single (yet important) function so you avoid using digital level controls on your audio interface that both compromise audio quality and run the risk of eventually sending a dangerous full blast signal to your speakers. Others offer many other features, such as talkback, or switching between multiple sources and speaker destinations.

SM Pro's M-Patch 2 is a simple, passive design and contains no active electronics in the signal path. This means it can't add noise or distortion, or otherwise colour your audio signals. There are two switched inputs, each with its own rotary level control: a main stereo one, with Neutrik Combi connectors, allowing you to plug in balanced XLR, balanced TRS jack or unbalanced TS jack leads; and an unbalanced Aux input, (duplicated on twin phonos and a stereo 3.5mm jack). The signals then pass through Stereo/Mono and Mute on/off switches before being routed to one of two identical balanced outputs on pairs of XLR sockets.

So far, this is an identical spec to SM Pro's original M-Patch model, with its 1U-high half rack-width case, blue front panel and optional rack-ears. However, the replacement M-Patch 2 incorporates various additional features that were suggested by users. This time, the black half-rack width case is 2U high, which has enabled SM Pro to employ much larger rotary knobs, and to add a basic headphone amp with its own level control (although only the headphone output uses active circuitry — the main signal path is still passive to alter audio quality as little as possible). The supplied external power supply to run this headphone amp also illuminates new front panel LEDs indicating power (although sadly there's no on/off switch), plus the status of the Stereo/Aux, Output 1/2, and Mute buttons.

Unlike the earlier model, the M-Patch 2 ships with a pair of brackets, so you can either mount it in a full width 2U rack space, or sit it on the desktop — either as-is, or bolt-on the rack ears in one of three other configurations to raise the unit up a couple of inches and use it horizontal or inclined by 10 or 20 degrees (a very clever touch).

A quick peek inside the M-Patch 2 showed that both component and build quality were good, with a four-gang pot for the main balanced level-control and a dual-gang for the Aux, both of which felt very smooth and precise. SM Pro informed me that these were hand-tested for tolerance and, unlike cheaper pots, the stereo image didn't wander about at very low settings either, although I'd have preferred more obvious knob pointers. That said, I was most impressed with SM Pro Audio's reaction to user feedback: when I suggested that more comprehensive calibration marks around the knobs would make repeatable settings easier, they not only agreed but got them onto the next production batch (you saw the new front panel here first!).

After extensive listening through my ATC speakers I couldn't detect any subjective audio changes with the M-Patch 2 in circuit, so I'm happy to declare it audibly transparent. One potential disadvantage of passive designs is that their high frequency response can be compromised if you connect long output cables to them, since the capacitance of the cable, in conjunction with the resistance of the potentiometers, forms a simple low-pass filter whose response alters with the pot's position. However, I experienced no such problems using high quality low-capacitance cables, and didn't hear or measure any top-end droop at all.

I found the second input really useful for patching in CD players and review soundcards, and you can even use the phono/3.5mm jack inputs simultaneously to plug in three simultaneous sources, while the twin outputs are great for those who have two sets of speakers for listening to mixes, or they could be used for simultaneous monitoring and recording. The mute switch is very handy if the phone rings or if your audio interface suddenly starts outputting an ear-splitting noise after a computer crash.

The headphone amp was quiet and reasonably clean and, whilst I wasn't expecting audiophile perfection from the electronics in an £84 box, it nonetheless provided decent bass control and it provides sufficient current to drive both low and high impedance headphones. It's a useful extra and, as I mentioned previously, you can use the M-Patch 2 without having its PSU plugged in at all if you don't need a headphone amp.

The M-Patch 2 is really handy in the studio, whether placed between audio interface and amp/speakers, a CD player and power amp, mic preamp and audio interface, or in fact at any point in a line-level signal chain where you find you have insufficient control over level. It provides all the features required by a typical DAW user, yet its main signal path is passive (just like rather more upmarket units such as Coleman Audio's M3PH Mk II and the Presonus Central Station), which makes it transparent enough to use with really high-quality gear. While some audiophiles might look down their noses at the inclusion of the headphone amp, I feel it's a handy addition, and overall, at £84, the M-Patch 2 is a real bargain!

Ironically, just three weeks after writing my recent PC Musician feature about using a monitor controller instead of an analogue mixer, my own mixer blew up! I was most impressed with what SM Pro Audio's M-Patch 2 offered for the price, so I decided that I would follow my own advice and promptly bolted the review unit into my rack and bought it for my own studio.

If you simply require a high-quality, passive volume control for stereo use you could try the NHT (www.nhthifi.com) 1/3 rack width PVC (Passive Volume Control) with fully balanced connections for about £99, although it lacks the input/output switching, stereo/mono, and mute functions of the M-Patch 2. SPL's (www.soundperformancelab.com) more upmarket Volume2 is an active design that features high quality ALPS pots and an illuminated Mute button for £199, and looks extremely slick. If you require more comprehensive features yet a budget price, two active models to look at are Samson's £80 C-Control (www.samsontech.com) and Mackie's Big Knob (www.mackie.com) for about £250, although their audio paths may not be quite so transparent.

If you're looking for a budget monitor controller that provides a useful set of features but doesn't compromise audio quality, SM Pro Audio's M-Patch 2 should be just the job!