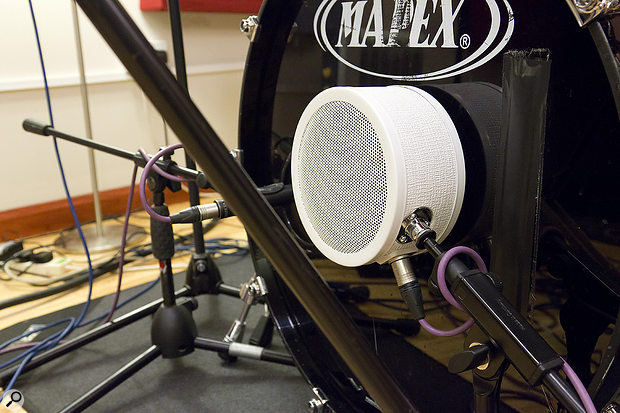 This mic offers an elegant means of getting that ‘reverse speaker’ kick drum sound without you having to butcher your NS10s!

Solomon are a new microphone company that came into existence when owner and designer Henry French saw the need to develop a microphone that could help capture the full frequency response of a kick drum, in a reliable package. The LoFreq was born, and is a new take on the ‘reverse speaker’ drum microphone. A slightly unusual and often misunderstood way of capturing audio, it’s been most commonly achieved in a DIY style, by wiring a Yamaha NS10 (or equivalent) driver in reverse. Yamaha did develop a commercial product, the Subkick, themselves (although it is no longer in production), but it was often criticised for its weight and a high price tag for what is a niche product.

The weight of such mics is relevant, as they can be a little tricky to position around other microphones. The LoFreq by Solomon is physically smaller and lighter than the Yamaha model, and also comes in at a much more affordable price. The designers also claim to have refined the original concept with the aim of extending its usefulness beyond just kick drums, and generally bringing a new lease of life to a relatively old idea.

Although I run a busy studio and record a lot of drums, a Subkick-type mic is not something I’ve honestly felt was lacking in my drum recordings. I have used DIY versions a few times in the past, and despite getting some seemingly useful low-frequency information at the tracking stage, they very often didn’t feature in the final mix. These days, there are also a number of quick and easy mix techniques for dialling in a little extra low end if required.

There is, perhaps, a bit of misinformation about what this kind of mic actually captures when placed in front of a bass drum. The common misconception is that the sheer size of the ‘diaphragm’ in such a mic means it’s somehow able to reach low frequencies that smaller mics can’t reach. In a reply to an SOS reader’s question, however, Hugh Robjohns explained what’s actually going on when you use a speaker in this application. In effect, a ‘mic’ like this is not behaving as a microphone at all, but a kind of air-actuated sound synthesizer: its output is not so much ‘captured’ as generated by the undamped resonance of the diaphragm (read more at www.soundonsound.com/sound-advic...).

I was still keen to revisit the idea of getting some use from such a mic, however, and Solomon have certainly created an affordable and good-looking new take on the concept. There were a few questions that sprung to my mind when reading Hugh’s explanation, with the main one being whether this kind of mic actually captures any unique information from the particular bass drum it’s in front of — with size, tuning and placement being the obvious variables. If they don’t, is there any point using a LoFreq or Subkick instead of, say, adding a sample at the mix stage? How critical is the placement, and is it essential to get the mic in phase? Plenty to think about, then, and I was also keen to see if the Solomon had any other usable applications apart from on a bass drum.

As mentioned, the LoFreq is a really great-looking product, and the mic generally has a nice solid feel to all aspects of its design and build. Solomon helpfully suggest a technique for getting the mic on a stand and, as for all larger mics, holding the mic whilst turning the stand itself is certainly the way to go. My first port of call was, unsurprisingly, outside a bass drum. After a little playing around, I found it more flexible to put the mic on a larger stand facing down, rather than a smaller stand facing up. I had a drum tracking session to do where, conveniently, the drummer was also very interested in what the mic had to offer, and was up for a little experimentation.

Initially, I placed the mic directly in front of the resonant head of a 24-inch bass drum and, paired with a Beyerdynamic M88 in the drum’s front port, we experimented with a number of different positions. My first impressions were promising, and my favourite spot was with the mic half over the front head’s hole and about two inches back from the head itself. Listening back in the control room, it’s quite an unusual sound if you haven’t used this style of mic before. As the mic captures very little above 2-3 kHz, you obviously get a heightened sense of the low-frequency information — it’s almost like listening to a bass drum through a wall. As the mic is very much intended to be used along with a more conventional microphone, however, the real test of its usefulness lies in how it combines with your other mic choices.

I’m a real stickler for getting drum mics in phase with each other, and I was a little concerned about how easy it would be to get the mic phase-coherent with my ‘inside’ kick mic. There’s little point adding a second mic to get more low end if that low end is all cancelled out when the two mics are combined! As many pictures I see of these style of mics in action don’t seem to have taken this into account, I was keen to see what difference it made. Getting someone else to move the mic, whilst I listened in the control room, revealed it certainly does matter: moving the microphone’s distance in relation to the other kick mic changed the combined low-end sound dramatically. Moving the mic around different locations in front of the drum also clearly brought different tonal options, and I found that having the mic really close to the head brought the most usable results. Assuming the LoFreq is to be used with another, more conventional mic, however, this means that you might have to compromise the position of your main kick mic in order to get them nicely in phase at the tracking stage.

We were also keen to see what difference the LoFreq made on a smaller 20-inch sized kick drum. In this context it clearly did provide a less bass-heavy sound that reflected a smaller drum, and by looking at captured waveforms of the LoFreq against my other kick mic, it was also clear that the mic was picking up unique dynamic information that was a true reflection of its source. This was an important final question for me as, come mix time, I often use a sample of a Subkick if I need a little low-end extension on my bass drum, and I generally wanted to know if using a dedicated sub-bass mic was worth the extra effort!

I also took the opportunity to try the mic out on a guitar tracking session where I knew there was very little else going on in the song, leaving plenty of space for some extra low end. The guitar amp was a typical Fender combo and the style of guitar was clean strumming with Jeff Buckley-style picking. I positioned the LoFreq alongside an AKG C414 with the 75Hz pad engaged, and took care to ensure the mics were in phase. Although this style of guitar didn’t generate a huge amount of really low frequencies, it did feel like the mic was giving me a nice bit of extra ‘roundness’ to play with in the mix. I’ve also had a chance to try the mic on a bass cabinet and again — although certainly not a deal-breaker — it felt like it gave me a little extra something to play with. In both these scenarios I found using a low-pass filter on the LoFreq, at around 200Hz, gave the best results in a mix.

The LoFreq is a well thought out and stylish-looking microphone that is very sensibly priced. After a little getting used to, it was a pleasure to use in the various recording sessions I tried it on, and it gave me useful results on a number of sources. Rather than claiming to have reinvented the wheel, or provide a one-stop shop solution, Solomon themselves are quite rightly marketing the LoFreq as a tool for ‘rounding out’ the sound of your low-frequency instruments — and primarily kick drums. Whether or not these mics are actually capturing something that belongs to the source, as I explained earlier, doesn’t matter one jot as long as it gives you something that helps capture, or enhance, the sound of your source — and I think ‘rounding out’ is a really fair description of what this mic has to offer. If you’re working on material that has space for plenty of low end, then there’s a good chance you’ll get some value from this microphone. If you record a lot of live drums, and especially if you are already a fan of using a Subkick-type mic, then the LoFreq is well worth checking out.

A lighter, smaller and more affordable take on the ‘Subkick’ mic idea, which has some surprising uses aside from kick drums.