The Ondes Martenot is as rare as it is hard to sample, leaving its distinctive sounds beyond the reach of most of us — until Soniccouture decided to step in, that is... 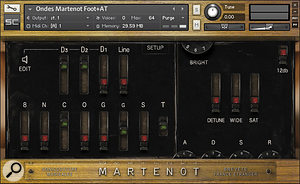 Left: Ondes' screen showing the basic 'natural' configuration. With the exception of the Bright knob, none of the controls on the right of the tiroir are on the original Ondes.

The Ondes Martenot (Martenot Waves) is undoubtedly one of the most intriguing and alluring of all the pioneering electronic musical instruments from the early 20th century. Revered by aficionados and famously difficult to master, its unique marriage of mechanics and electronics demands a degree of human interaction that makes it arguably the most expressive electronic performance instrument ever made. Soniccouture have teamed up with Thomas Bloch, one of the world's foremost Ondes performers, to make this Kontakt‑hosted recreation. All the timbral registrations from Bloch's own instrument were captured, each one sampled across a seven‑octave range. Sonic have also taken into account the physical performance actions and acoustic properties singular to the Ondes Martenot that are crucial to its unique character. 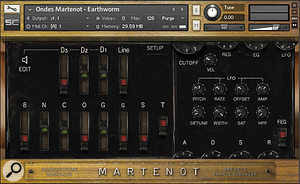 While the Ondes Martenot is a monophonic instrument, Sonic have seized the opportunity to expand upon this, providing the option to play their Ondes monophonically or polyphonically, together with optional filter, ADSR and LFO parameters that were not found on the original.

First things first: the top‑level preset 'Ondes Martenot.nki' brings up a 'naturalistic' default Ondes setup. The GUI represents the principal controls found in the tiroir (see the 'Ondes Martenot Explained' box), namely the timbre and speaker selectors and a brightness control. Further controls to the right (absent on the original) provide oscillator detune, stereo detune width and saturation. Also here are ADSR amplitude envelope controls, should you want them, and a 12dB switch that engages a filter, replacing the brightness control with cutoff, resonance and envelope amount (also responsive to the ADSR controls). These additional features are all optional. If you want to emulate a traditional Ondes, just leave them in their 'off' positions with the amplitude's ADSR sustain level at maximum.

A long‑scale ribbon controller brings extra realism to Ondes performances. A Kurzweil PC2RIB is seen here mounted above the keyboard on my Kurzweil PC3, together with a Yamaha breath controller (resting on the keys).

Like a real Ondes, this recreation thrives on real‑time player control — the more the better. Played as it is, the default preset sounds very static, not unlike the 'init' setting on a monosynth. Some life and soul is needed... cue the Setup page, which provides various MIDI control options for emulating the way volume, pitch, vibrato and glide are controlled on the Ondes. It's up to you to configure things in a way that suits your particular MIDI controllers, not to mention your own ability to co‑ordinate your movements in the right way! For example, to approximate the articulation function of the touche d'intensité tablet, volume could be assigned to aftertouch, but as it stands, this method would make smooth, legato lines almost impossible to execute. However, you can assign any single key to be excluded from making a sound; this 'silent' key is used to generate aftertouch with the left hand while you play legato lines with the right. Alternatively, you could let the ADSR shape the amplitude, while controlling the attack time with a real‑time MIDI controller or key velocity.

Recreating the ruban technique (pitch sliding) is also a challenge, and Sonic's workaround is to use glide (portamento) to simulate this. Glide can be left permanently on, or applied only to notes played legato. Glide time can be absolute (fixed) or relative (depending on distance between notes). Best results are obtained when glide time is assigned to a controller (for example, the mod wheel) so you can freely vary the glide transition speed between notes. This might initially seem like guesswork, but with practice you get a feel for the right wheel positions.

The Speaker edit page. Each speaker comes with a selection of presets, plus additional manual controls for return level, and decay times for D2 and D3.One very effective method of simulating the ruban is to use a long‑scale ribbon controller — owners of a Kurzweil K2500 or K2600 will be fortunate enough to have this facility. Frustratingly, alternatives are thin on the ground. The only examples I can find are Doepfer's R2M (which doesn't come cheap) or Kurzweil's hard‑to‑find PC2SRIB Super Ribbon controller, which only works with Kurzweil gear anyway! The nearest (and most costly) thing that might qualify as the ultimate Ondes performance solution is Haken Audio's Continuum Fingerboard (see the 'Alternatives' box).

Natural vibrato is another important factor, and while you can apply automatic vibrato using an LFO, it's not ideal. A good method of creating real finger vibrato is to use a small X/Y controller pad (such as the Korg Nano Pad) assigned to a narrow pitch depth. Some keyboards also have a short‑scale ribbon controller which would work well for vibrato, but have insufficient length for effective ruban duties. Since I am fortunate in having a PC2SRIB hooked up to my Kurzweil PC3, I used that for my ruban sweeps and finger vibrato, with my trusty Yamaha BC1 breath controller sending MIDI CC2 for volume. This combination produces very gratifying results! In the absence of a ribbon controller, an alternative to try is having glide speed controlled by the mod wheel, plus a breath controller for volume (or footpedal sending CC11), and using aftertouch to generate positive‑pitch finger vibrato. For the latter, assign aftertouch to pitch with a range of approximately a quarter‑tone, and adjust the overall tuning of the instrument to be at concert pitch when no key pressure is applied.

The Setup page is where various MIDI controllers can be assigned, and response curves set for each parameter. Glide settings and monophonic or polyphonic modes are also selected here, and your personalised Setups can be saved and loaded.

Thomas Bloch modified his Ondes to include a DI output, in order to sample the raw waveforms that make up the 1.5GB core library of Ondes. A real Ondes is played using one of (or a combination of) three proprietary speakers (or diffuseurs); these are described in the 'Ondes Martenot Explained' box below. Sonic have duly recreated each speaker in the form of convolution impulses, with impulse return level and decay times adjustable from the Speaker Edit page. The signal can be sent to these virtual speakers in any combination; unlike the original, the mix level of each speaker is continuously variable. A mixable 'Line' output has also been provided, should you ever want to have direct access to the raw waveforms.

In the Monophonic Presets folder are patches that take the concept further into synthesizer territory. In addition to detune and saturation, the 12dB filter is permanently engaged, and is responsive to key velocity. LFO depth controls for filter, pitch, rate, offset and amplitude modulation are added, as well as a high‑pass filter. Interestingly, when Sonic's Ondes is in monophonic mode, it is indeed monophonic when played legato; but with long release times, the release tails ring on polyphonically when notes are played détaché.

The Polyphonic Presets folder features 50 patches with identical synth parameters to the Monophonic patches, the obvious difference being that they play polyphonically at all times. These synth‑style leads and atmospheric pads created from the raw Ondes waveforms come as a welcome bonus, the latter satisfying those curious to know what a polyphonic Ondes might have sounded like. 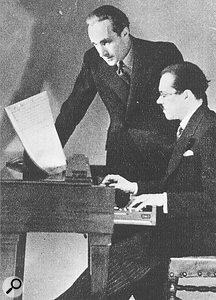 Original models of the Ondes Martenot are all but impossible to obtain or afford, and unless you can stump up 12,000 Euros for one of Jean‑Loup Dierstein's new reproduction instruments, the dream of owning a real Ondes is likely to remain such.

Having come to terms with that disappointment, I think Soniccouture have done a creditable job of making the Ondes waves (tautology intended) available to us all, albeit vicariously and with inevitable compromises. Admittedly, it takes a little perseverance to coax out anything close to the expressivity of the real thing, not to mention a basic grasp of how it should be played. Nevertheless, it's perfectly possible to hit just the right combination of moves that induced those 'ooh, that's it!' moments. If you're hungry for more information about pukka playing techniques, the internet offers plenty of videos of the Ondes maestros at work. Think of them as free 'how to' tutorials that will help to get the most from this very affordable recreation of a timeless classic.

Sonic's Ondes is currently the only virtual recreation of the instrument using real Ondes waveforms. However, two controllers stand out as being dedicated to providing a level of physical interaction comparable to the original instrument.

Analogue Systems' French Connection keyboard controller recreates much of the mechanics of the Ondes Martenot, but works only as a CV/gate controller for analogue synths. Gordon Reid's detailed review of this device can be found here: /sos/feb02/articles/frenchconnection.asp.

Haken Audio's Continuum Fingerboard is effectively a giant MIDI ribbon controller, intended as an alternative to a standard MIDI keyboard. It not only responds to the player's movements in three dimensions, but can do it with up to 16‑note polyphony, and provides an ideal means of performing on the virtual Ondes, but it ain't cheap! www.hakenaudio.com/Continuum

Two modern reproductions of the Ondes currrently exist. The first is the Ondéa, which engineer Ambro Oliva began manufacturing in 1995 (www.oliviermessiaen.org/messonds.html www.cslevine.com/ondea/ondeanotice1.pdf). Since 2008, Jean‑Loup Dierstein has also been developing a new Ondes Martenot, 'officially' endorsed by Maurice Martenot's son, and based on the final 1988 model. Production began in January 2011, with the first shipment scheduled for April 2011. See www.thomasbloch.net/new_ondes_martenot

The web is rich in information about the Ondes and these sites stand out in particular: www.cslevine.com/ondes and www.thomasbloch.net.

In this video, Jean Laurendeau gives a very effective demonstration of the Ondes, ending with a smile‑inducing rendition of a famous tune: www.youtube.com/watch?v=Yy9UBjrUjwo.

Using samples of a real Ondes Martenot, Sonic Couture have recreated this iconic and highly expressive instrument in affordable virtual form. With the right kind of MIDI control devices, good limb co‑ordination and patience, it's possible to coax out a pretty good impression of an Ondes performance. The additional synth envelopes, filter, effects and polyphonic capability are also a bonus.