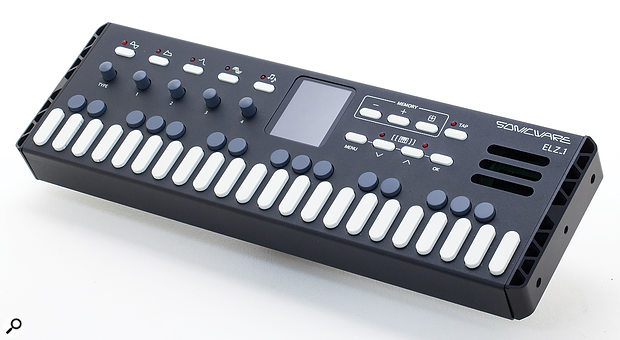 Sonicware are a new company from Japan. Their debut into the electronic world of sonic exploration comes in the form of a small digital desktop synthesizer, which their website calls a "synthesizer reinvention laboratory". Perhaps that sounds better in Japanese, but there's a great deal of promise in the ELZ‑1, and it's all proudly digital.

The 399 × 133 × 50mm chassis is solid metal and looks stylish and clear. A bright multi-colour OLED screen sits in the centre. Five endless encoders and a smattering of buttons are used for preset and menu navigation. There's a three–octave arrangement of buttons in place of a keyboard. It isn't velocity-sensitivity and the keys clack when you play them, so not a keyboard for virtuoso playing, but it's adequate for sound–design purposes.

Round the back, a 5V DC input means the unit can be powered via USB — a USB to 5V input cable is included. Power can also come from four AA batteries. A mini-USB Type B connector provides MIDI In and Out, but can also serve as a USB host, meaning you can plug in and use a USB MIDI keyboard or interface. A USB to 5-pin DIN MIDI in/out converter cable is included for those who like their MIDI the old-fashioned way. A pair of TS unbalanced jacks supplies stereo output alongside a stereo mini–jack for headphones. Each has a separate volume control (oddly placed on the rear). The headphone volume pot doubles up as a volume control for the internal speaker. Finally, there's a mini-jack aux input for sampling to the internal flash memory.

The oscillators are clearly the heart and soul of the ELZ‑1. A press of the Oscillator button puts the screen into oscillator edit mode and a quick twist of the Type knob scrolls through the various oscillators available. Each has a set of parameters which can be adjusted using the four encoders marked 1-4, and the OLED screen shows what each encoder will do. Further pages of parameters can be accessed by pressing the Oscillator button again. This basic workflow is the same for other synth sections. For example, press the Filter button, select the filter type with the Type control and adjust parameters with encoders 1-4. If there are more parameters available, this will be indicated on screen, and they are accessed simply by pressing the Filter button again.

A single oscillator can be active, making this essentially a one–oscillator synth, although some types contain within them more than one (the 4-op FM mode, for example). There is six–voice polyphony, plus Mono and Mono Legato modes, each with Note Priority and Glide Time options.

And so we dive into the oscillator types. First up, there's a trio of comparatively normal oscillator modes. The Standard Osc offers the usual analogue-style waveforms. The Low-Bit Osc allows you to reduce those waveforms to between 8 and 2 bits, perfect for chip tunes. Custom Osc allows you to combine two standard waveform shapes by appending one to another and adjusting how many times they will repeat. This results in some interesting rhythmic noises.

Next up are three wavetable oscillators. The first is named 8-Bit Wavemem Synth. (It's not entirely clear why the naming convention changes from Osc to Synth here.) The 8-Bit Wavemem Synth allows you to draw your own 8-bit waveforms and save them in up to 50 memory locations. There's a corresponding FM mode which allows you to create waveforms by adjusting a carrier/modulator combo and then saving the static waveform to 20 more memory locations. The final Wavemem mode allows you to morph between three of the saved Wavemem shapes, either FM or standard. You choose the three waveforms, then choose a time and the oscillator will morph between them automatically. Sadly, the morphing always starts from the same phase when a note is played. Morphing which runs freely and independently of Note On messages, or morphing via any other modulation source, isn't possible.

The next two oscillator types allow you to extract and manipulate audio from a recorded audio file. Up to five seconds of 48kHz, 8-bit audio can be recorded via the aux input and saved in one of three flash memory slots. The audio is retained even when the synth is powered down. WAV samples, if suitably trimmed and in the correct format, can also be imported from a computer via USB. The intriguingly named DNA Explorer oscillator allows you to extract waveforms from one of the three stored audio recordings. The manual doesn't go into detail about exactly how this works, but it seems like a simple short loop derived from a part of the audio recording with adjustable start and loop times. It's a fun way to come up with unique waveforms. A Harmony parameter adds a second copy of the oscillator an octave above the first.

The second oscillator type which makes use of audio recordings is SiGrinder. It's similar to DNA Explorer but adds the ability to travel through the audio file at a speed of your choosing. This creates all manner of complex, evolving, low–resolution granular–type sounds and was definitely a favourite of mine amongst the many options.

FM Synth gives us what appears to be a full 4-op FM synth. The graphic display shows the algorithm configuration, and there are 31 to choose from. For each operator you can tweak ratio, level, feedback and detune. A mysterious control called Gacha randomises the available parameters. Unlike most 4-op FM synths, there are no envelopes for controlling operator levels or pitch, which is a shame, but it's still a great source of FM sounds.

The filter selection is fair, if unremarkable, comprising 6dB/octave low- and high-pass, 12dB/octave low– and high-pass, band-pass, notch, peak EQ, and low- and high-shelf EQs. All filter types allow you to adjust pre-gain, which is a nice way to add some overdrive. It's strange that there isn't a 24dB/octave filter, but I found all the filters to sound excellent.

The Envelope button gives access to what I initially assumed would be a modulation matrix of some kind, but in fact its sole suppose is as an amp envelope. More on modulation (or the lack of it) later. There are two envelope types: a standard ADSR and an ADS-RA-R, which gives an additional attack and release stage on Note Off. Both envelopes can have variable curves on almost all stages. A basic but informative envelope graphic is presented on screen as you make adjustments.

Next up is the effects section. There are four effects slots with a well–chosen selection of effects for each. The first slot is named Drive/Mod and offers a selection of distortion, overdrive, ring modulation plus modulation effects such as chorus, phaser and flanger. The next slot is simply called Modulation and gives you another chance to apply modulation effects. The third slot is reserved for delay, of which there are three variations: digital delay, tape delay and reverse delay. The final slot is for reverb: room, hall, plate or custom. As a whole, the effects won't win any awards. The reverb and delay are ok and the modulation effects are usable. Probably the strongest of the lot are the distortions, which seem to pair nicely with the strong digital nature of the synth. It would have been nice to see as much creativity in the effects section as there is in the oscillator section, but they're useful to have nonetheless.

The arpeggiator offers the basics, but nothing extraordinary — the usual up, down, up/down, random and play order modes are supported, as is gate length. The arpeggiator is either sync'ed to internal clock, MIDI Clock, or to an analogue clock plugged into the aux input.

From a sound perspective, the ELZ‑1 is a breath of fresh air in the current climate of me-too analogue synthesizers.

I've purposely been neglecting one important aspect, and that's modulation — a key element in making any sound expressive or evolving. As my exploration of the ELZ‑1 continued, modulation become more and more troubling by its sheer absence. There are occasional glimpses. For example, in the Oscillator section you can choose either an LFO or an envelope, plus a single destination. In most of the oscillator types. However, there is only one destination to choose from: pitch. Some oscillator types allow a few more destinations, but only one can be active at any time. The Filter section has a similar setup; a single LFO or envelope which can be routed to frequency but not much else. The envelopes available in the Envelope section cannot be applied to anything other than amplitude.

To endow a synth with such a cornucopia of oscillator types, yet not allow modulation of almost anything within, beyond basic pitch and filter cutoff, seems criminal. I can think of a thousand uses for freely assignable LFOs, envelopes, velocity, mod wheel, and so on. The FM, wavetable and granular modes cry out for it. A modulation matrix of some description is something we almost take for granted in a synthesizer, and yet it's almost entirely missing here.

MIDI implementation is similarly scant. Beyond the MIDI channel to which the synth responds, there are almost no MIDI options at all. Velocity is fixed to amplitude. Pitch-bend is fixed at an octave either way. Modulation wheel seems to be ignored entirely. If you want to automate anything from an external source, you're out of luck.

From a sound perspective, the ELZ‑1 is a breath of fresh air in the current climate of me-too analogue synthesizers. There's real character here. The sounds remind me of early, mid-price, digital synthesizers like the Yamaha DX range or the Waldorf Microwaves, but perhaps with a rougher edge. It is proudly digital and for that, I love it.

On the other hand, it does feel unfinished in places. Patches can feel rather static, because there's nothing to move them beyond filter envelope or vibrato. The lack of modulation is disappointing and the MIDI spec is almost non-existent. I would gladly trade the entire effects section for a modulation matrix and some good sources. It looks like Sonicware will continue to develop the ELZ‑1. Indeed, just as this review was wrapping up, they released version 2 firmware, which makes some improvements (although doesn't address my main modulation and MIDI gripes) and adds a major new sequencer — see the 'Version 2' box.

Despite my reservations, I found myself liking the ELZ‑1 more than you might think. It makes up for its lack of refined features with a bold and audacious sound. Granular, wavetable and FM, all in one synth, for under £500$600, is a winner. I hope to see the ELZ‑1 develop further and I'm rooting for it.

The sequencer works independently from the main synthesizer, so you can change presets whilst playing back a sequence, which I rather enjoyed. It would have been nice if the update came with 128 sequences already populated for instant fun, but all slots are empty and initialised, so some sleeve-rolling and elbow grease are required.

The sequencer and arpegiattor can now be sync'ed over analogue clock, as well as MIDI Clock. The aux input is used to supply a 24ppqn analogue clock such as those used by the Korg Volca series and the Teenage Engineering Pocket Operators.

Finally, Sonicware have added some new modulation options on selected synth engines. The granular DNA Explorer and SiGrinder engines can now have all their parameters modulated via the engine LFO or envelope. This is great news as it means real-time modulation of the Explore parameter amongst others, which wasn't previously possible. Unfortunately the FM engine hasn't received any similar updates and my sadness at the lack of modulation generally is still palpable. Nevertheless, version 2 is a great update and shows Sonicware's commitment to improving the ELZ‑1.

A promising synthesizer with a rugged digital charm, which bucks the current analogue trends. With a little more love, the ELZ‑1 could be a champion.