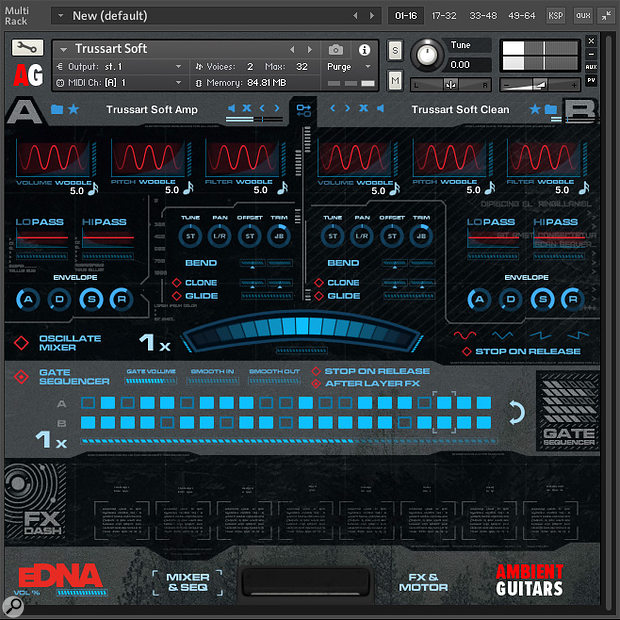 I'm a big fan of creating non-guitar sounds with my own guitars, so I was keen to see what Spitfire had come up with when they announced Ambient Guitars, a Kontakt instrument based around a collection of modified guitar sounds, sonic textures and loops covering a huge range of styles. 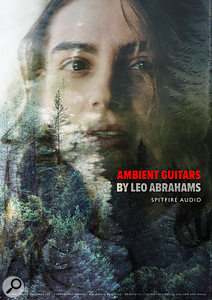 Most started life as scraped, plucked, eBowed or otherwise tormented guitar notes. These samples are then further processed and combined via the user interface's routing, filtering, envelope-shaping and effects facilities. The sounds were created and performed by Leo Abrahams with a view to applications in film, TV and game music, as well as musical styles reliant on atmospheric textures. Using a wide range of guitars, pedals and effects, the recording took place in London's Pool Studios and the resulting samples were then forged into over 400 presets, including 160 artist presets, created by composers and Spitfire founders Christian Henson and Paul Thomson. Though there is support for the free Kontakt Player, Construction Kit patches require the full version of Kontakt 6.

The content of Ambient Guitars isn't all new, as it includes Spitfire's Enigma One and Two alongside over 10GB of new samples and new presets — so anyone already owning these earlier libraries qualifies for a substantial discount. In fact if you own both you get the crossgrade for free. Enigma 1 owners get a 28.45 percent discount and Enigma 2 owners get a 71.55 percent discount. In total the collection comprises over 600 sounds and the download is a massive 50GB or thereabouts. If you live in a tree with a dial-up modem, you can also buy the library on a flash drive. Ambient Guitars supports the free Kontakt Player format with full NKS support, though you can delve deeper into it using the full version of Kontakt 6.

The main folder of Ambient Guitars reveals 10 'type' sub-folders with suitably descriptive names, and each folder contains a large selection of preset patches. The 10 folders are: Inspiration, Distorted (which has its own simpler GUI), Inspiration Distorted, Enigmatic Pads, Amped Guitar Pads, Feedback Evogrid (again with simpler GUI), Arps 'n' Chords, Odd Loopers, Atonal and Artist Presets. A further Advanced folder expands to show three additional categories: Construction Kits (load your own samples if you have the full version of Kontakt by dropping into the 'Example Layer'), Factory Sounds, and Presets (Full), the latter of which permits further editing.

The main GUI for instruments other than Distorted and Feedback Evogrid is known as the eDNA window (shown above) and is essentially the control room for creating, playing or editing presets. It is logically set out with a very generous set of sound–shaping tools in the Mixer & Seq view (the other view being FX & Motor). The eDNA 'instruments' start life as two sounds loaded in Sound Bays A and B, which are then modulated via the Wobbles section (LFOs linked to volume, pitch and filter, with separate controls for the two voices) before being further shaped via a filter and envelope. A mixer with a curved meter-like display blends the sounds from the two Bays, and its output is fed into an intuitive Gate Sequencer, which can be activated for the creation of rhythmic effects. The attack and decay of the gate can be varied or even automated and the A/B Sound Bay blend can be controlled from a mod wheel or driven from an LFO to create moving textures.

Sounds can be tuned, panned and 'offset', the latter enabling you to use a differently pitched original sample shifted to your target pitch so as to offer an alternative timbre. Different pitch-bend settings can be applied to Sound Bays A and B and there's also the option to add portamento.

As Spitfire suggest, this collection is indeed ideally suited to film and game composition, though there's plenty of scope for more mainstream compositions too.

And there's no shortage of effects. Effects on offer via the FX Deck include guitar amplifier modelling (with a choice of miking options), limiting, tape saturation, distortion, lo-fi, saturation, stereo width processor, delay, all the usual modulation effects, convolution reverb, algorithmic reverb, formant filtering and peaking or notching filters based on the classic diode ladder circuit. Spitfire's eDNA engine includes five effects sections or racks, and all offer the same features, other than the FX & Motor rack, which deals with more sophisticated, user-assignable modulation options. Different effects can be applied to Bays A and B and to the overall mix. While the Wobbles section creates modulation based on single LFOs, Motors employ a main LFO controlled by a second sub-LFO with full adjustment over intensity and frequency and with the ability to mix waveform shapes. The Motor FX Bay can be placed pretty much anywhere in the signal chain, and clicking the FX & Motor button opens up a view showing which effects are active in the Master, Bay A, Bay B, Aux or Motor chains. There's also the possibility of adding further effects via Kontakt's own effects engine. A browser built into the eDNA interface allows easy patch browsing with the option to give each a rating.

The Spitfire's 16 x 16 Evogrid pegboard–style matrix appears when you select the Feedback Evogrid instrument, and allows the 16 available Evo samples to be layered in creative ways to create sounds that evolve and shift over time. The vertical row denotes key ranges and the individual Evo samples are set out horizontally; you can click to add or remove a 'pin', with some useful key combinations to help add vertical, horizontal or diagonal lines of pins. As the Evo loops tend to be quite long and undergo various changes in timbrality before looping, layered sounds tend to lose their sense of repetition — each Evo sample was recorded at a different tempo so the way they combine is constantly changing. Evo samples can be called up as conventional patches too, and new patching arrangements can be created at random using the tiny dice icon to the right of the Evo logo. 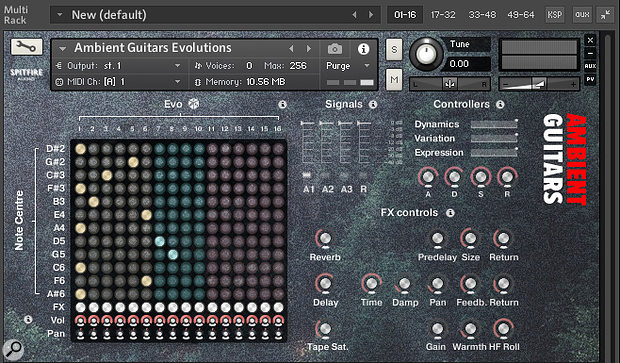 The Evogrid matrix allows 16 Evo sounds to be layered to create evolving patches.

A read through the manual reveals that while there's plenty of instant gratification on offer, you can take a long stroll down the rabbit hole if you want to get seriously geeky when modifying or creating patches, especially when applying modulation or assigning parameters to outside MIDI control. However, there's a good range of factory sounds, and as both the A and B sections have their own sample browser, it is very easy to swap out samples without changing to a new patch.

Other than my usual gripe when it comes to anything to do with Kontakt (everything is too small!), the eDNA window is actually pretty easy to operate once you realise those tiny 'stitching marks' scattered around the window are actually parameter control sliders. Many of the guitar pads sound similar to what you might expect from a synthesizer, but with the benefit of an organic texture that synths rarely achieve. These cover everything from dreamy drones, faux chimes and delicate soundscapes right up to fuzz feedback that sounds like musical chainsaws, so there's plenty to explore. There are also percussive, bowed, piano and marimba-like sounds, again all with an underlying organic feel, plus there are some attractively oddball sounds achieved by bouncing objects off the guitar strings before adding effects. Spitfire's Peel Guitar is a popular patch and sounds like a piano/guitar hybrid with just a pinch of mystery.

As Spitfire suggest, this collection is indeed ideally suited to film and game composition, though there's plenty of scope for more mainstream compositions too. Ambient & Beyond might have been a better title, as this collection goes far beyond ambient music genres.

Not a new idea but very well executed, where the source material makes the results sound less sterile than conventional synthesis.