This latest Sonivox title for Native Instruments' Kontakt soft sampler is a distinctly left-field library based around lots of recordings of human noises of all descriptions, including not only weird and wonderful vocal sounds, but also loads of percussive body noises. Singing, humming, buzzing, whistling and gargling are amongst the more pitched offerings, but even the more traditional choir textures aren't exactly Symphony Of Voices, having a quirky, often wandering, Mellotron‑like slant to them — the emphasis is clearly not bread‑and‑butter 'insert choir here' arrangement fodder. When it comes to more percussive instruments, there are finger clicks, claps, burps, coughs, burps, snores, laughs, sniffs and farts aplenty — although combining the last two options might best be avoided. 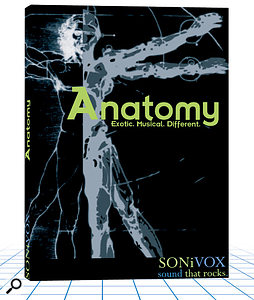 The actual instruments in Kontakt don't just map out the samples for you, but mould and mangle them further within the sampler's flexible processing environment, in some cases departing so far from the original samples as to become pure sound design, albeit usually with some surviving vestige of an organic origin. Some categorisation is provided, with folders for things like Choirs, Leads, Pads, Drum Kits, and SFX, but to be honest I'm not sure this is the kind of library to go to if you already know what you want and have to fit that sound within an existing mix; it's just too quirky for that. Look to Anatomy instead for kick‑starting your inspiration or providing off‑the‑wall incidental hooks.

There's lots of good stuff in here, and careful browsing will reward the open‑minded electronic musician with lots of great 'what/how the hell?' moments that wouldn't be forthcoming from any other collection I can think of. I loved the endearingly amateurish performance aesthetics that Sonivox have deliberately captured on a lot of the samples, and many of the pitched leads and pads have a real punch and malice to them when pushed into low registers. The pitch-bend and modulation wheels are put to inventive use in a lot of the Instruments, to provide immediate hands‑on gratification, often of a filtery variety. Many of the patches also use clever Kontakt programming, such as alternating samples with successive key presses, in order to add variety to otherwise repetitive sequenced performances.

Other programming aspects are less stellar, however, with some very lumpy sample loops, uneven keyboard velocity mapping, and the occasional tendency for movements of the mod wheel to massively overload Kontakt's outputs without warning. The scripted interface was also a bit flaky for me, with the controls on a number of occasions not achieving the results I was looking for, especially when I was trying to reduce envelope release times or turn off the reverb effects. (I was able to achieve what I needed by adjusting Kontakt's internal detailed settings, but that's not really the point.)

Fun though Anatomy is in the abstract, its amusement value won't really match the asking price on its own, so this isn't a title to purchase on a whim. Have a good listen to the demos and ask yourself how much you're realistically going to use samples like these before you flex your credit card. Mike Senior