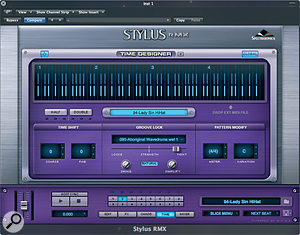 It's quite rare that we find the space to look at updates to plug‑ins, but Spectrasonics' Stylus RMX v1.7 includes new features that I don't believe anything else duplicates, and which could really enhance the way MIDI-triggered 'slice' patterns are used. Though the update includes evolutionary enhancements such as Suite Editing, Host Transport Sync, better favourites management and extra effects plug‑ins taken from Spectrasonics' own Omnisphere software, the big news is the Time Designer feature. Put simply, this allows any RMX groove (or any imported REX groove) to slot into the time signature and feel of any other, and is adjustable in real time. Another key feature of Time Designer is that it lets the user simplify patterns that might be too 'fussy' for the intended purpose, or even to change their time signatures. The designers have developed new algorithms for this task, based on musical rules, so that slices are progressively and seamlessly removed from the RMX grooves in a manner that makes rhythmic sense.

Version 1.7 of Stylus RMX is also the first 64‑bit native Windows software release from Spectrasonics — and we're told that the Mac 64‑bit version is expected later in the year.

All the time‑travel cleverness I've alluded to is accessed using the newly added Time button, which brings up the Time Designer page with its own dedicated controls, divided into Time Shift, Groove Lock and Pattern Modify areas. Time Shift can push, drag or offset the groove in milliseconds or rhythmic values. Within the Groove Lock section you can choose which RMX loop should be the 'master' from a pull‑down menu (which also includes basic beats‑per‑bar sync options — see screen shot, right), and change the swing and rigidity of the feel. Time‑signature adjustment is accessed from a comprehensive list of choices in the Pattern Modify area, ranging from 4/4 to 13/8. Recognising that the algorithm might not always restructure the groove in the way you want when changing time signatures, there's also a Variations feature that lets you choose from eight slightly different versions of the groove in its existing or new time signature. 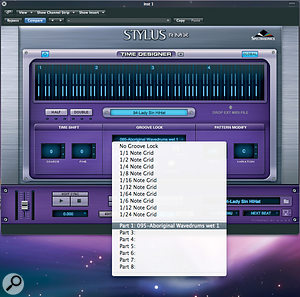 The pull-down menu that allows you to set which RMX loop should be the 'master' for the Groove Lock function.To browse the RMX libraries in Groove Lock format, you first choose a groove or template as the master, set your subsequent part to lock to it via the Groove Lock menu, then switch off the Settings button in the loop-browser page before swapping to a new groove, to prevent the grooves reverting to their original edit settings. Now all the loops are played Groove Locked to your master groove as you browse them — brilliant! The same applies if you change the time signature — you'll hear that reflected in all the grooves as you browse them.

The MIDI files that RMX creates are in the time signature you determine, so you could start off with one in 4/4 by dragging that MIDI file into your DAW track, then later create a new version in a different time signature and drag that into the same DAW track at the desired point in the song. It would make sense to also change the time signature in the DAW itself at that point, so your RMX MIDI files line up with the quantise grid.

Any changes made to the time signature, Groove Lock or pattern are reflected in the MIDI file at the time you drag it into your arrangement, after which you can still edit it as normal. You can also Groove Lock to any RMX groove template, or to an external MIDI file by dragging it into the Time Designer window, where it acts as a groove template. Time Designer and Chaos Designer can be used together to create variations, while Simplify also provides visual feedback to show which slices are being removed.

I'd love to have space to go into this update in more depth, because it really revolutionises the capabilities of Stylus RMX. The Groove Lock feature alone makes it a winner, and is just as easy to use as claimed. Not all grooves feel right together, of course, even though Groove Lock forces them to follow the master in a musically correct way, but you'd be surprised at what can be made to work, and the usefulness of the groove library is thus expanded. What's more, if you're one of those who likes to stray from 4/4 occasionally, the ability to change time signature is pure magic. Best of all, the update is free to existing Stylus RMX users.

The ability to use any groove alongside any other, in any time signature, really gives the whole concept of loop‑based instruments new life, as you can now pick any rhythm using any sound set and force it to slot in with your master groove.