Sonokinetic's Tutti eschews the approach taken by most orchestral sample libraries, offering, instead, a selection of effects designed to bring your pieces to life... 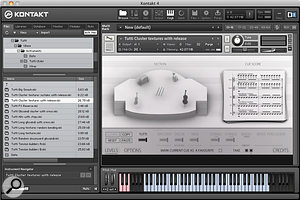 Tutti doesn't offer a huge number of controls, but setting individual levels for mic positions or instrument groups helps to extend the usefulness of each cue.

From the earliest days of the Mellotron and the string synthesizer, we've edged ever closer to the dream of possessing a whole orchestra to serve us day or night. These days, multi-gigabyte libraries packed with more gritty reality than a stack of old newspapers are the vital stock of the professional composer's trade. Meanwhile, modelled instruments place demands on both processing power and programming chops as they push closer to rendering the nuances of single instruments. I've no idea how close we are to accurately simulating an ensemble of individual humans and their instruments in an acoustic space, but I suspect the answer is 'not very'.

Alternate means of 'reality enhancement' are therefore much in demand, which is where Sonokinetic's Tutti, which aims to aims to breathe life and personality into computer-bound orchestras, comes in. Tutti's 7GB of content is not intended for conventional performance. Rather, it concentrates on orchestral cues (as typically used to set the scene prior to a musical entrance) along with hits, effects and atmospheres, all recorded in the same space. A bucketful of eerie pitch-bends and glissandi, plus scratches, scrapes, rustles and crescendos, offer your productions the realism that only real people (just under 100 musicians were involved) in a real hall can supply.

The recordings are great — and I'm not just talking about the 48kHz, 24-bit AIFF format in which they are delivered, either. Some of the cues span up to eight bars, and each was recorded using five different microphone positions. Thanks to a friendly interface, you can experiment freely with these positions on playback, extracting far more from each sample than you'd ordinarily get. If that's not enough, most of the cues have been recorded in multiple takes, leaving you the choice of either 'round robin'-style selection per note, or playing the specific take you prefer. This approach is about getting the most from each recording and it definitely works. 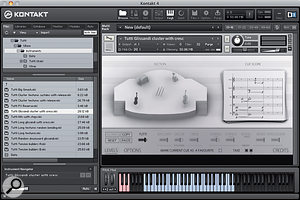 The cue score gives an impression of what to expect. Specific takes can be selected via the pink keys; any marked as Favourites appear as green key selections in the keyboard's upper part.

Tutti is compatible with Kontakt 4.2.2 but it does require the full version, not the free Kontakt player. Even so, it doesn't install as a full library entry; instead it is to be found under Kontakt's 'Files' tab. In practice, this isn't a big deal, but it means that you have to navigate to your Tutti folder each time it's required. The library is split into two components: Base and Additionals. The former contains the instruments and samples, while the latter has artwork, documentation and a video tutorial. Naturally, all the samples are royalty and copyright free; they are presented in the form of the following Kontakt instruments:

Big Smash: Just that — 12 huge hits, some with cymbals or gongs. When you want to end a piece abruptly or scare the pants off someone, these do the trick.

Cluster Textures Sustains/Release: By using the two pink keys towards the bottom of the keyboard you can switch between these (there are more of the Sustain type). This instrument includes some impressive atmospheric surges and general noises: anything from the scratching of bows to chaotic runs of woodwind, strings and brass. There's even a fair approximation of the strings from Psycho, along with various augmented chords and an aura of mystery.

Cluster Textures With Release: This continues the mysterious theme, many of the individual notes enhanced by multiple takes. You can mark takes as favourites, too, and these are available as green notes near the top of the keyboard. A small Cue Score is provided, along with a fair degree of control over level and stereo width.

Glissandi Cluster With Cresc: A set of clusters ending in crescendos. These are perfect for the times when you want the tension to build, then climax. Some of the discordant brass and woodwind effects are truly spectacular.

Hits With Stops: Mammoth orchestral hits in a number of takes, with stops of epoch-ending quality.

Long Gliss With Cresc: Some of these are very long indeed — perfect tension builders for scary moments. I suspect that the orchestra had a ball recording these!

Long Textures Random Bending: Textures and pitch sweeps in a variety of keys. Some of the alternate takes vary quite a bit, so are almost like extra bonus instruments.

Long Textures: Similar to the above, but without the multi-takes.

Random Downward Glissandi: Features the orchestra going into overdrive as it generates effects suitable for falling over cliffs, and so on. The brass section is especially unrestrained!

Tension Builders: Features some very complex material, including what appears to be the sound of an orchestra putting its chairs away. I'm definitely using that somewhere! The blend of orchestration provides a wide range of tones suitable for either small or large productions. If you dare trigger several together, it can be mayhem — good mayhem, though!

Harp Arpeggios: Basically, lots of harp action — from scrapes and pitch bends to a series of plucked samples you can 'keyboard strum'. Finally, there are some authentic up and down arpeggios that demonstrate how it's really done!

Percussion FX: Full of booms, bangs, rumbles and hits. You can never have too many of these, and some of the percussive build-ups, in particular, wouldn't be out of place in massive Hollywood productions.

Tocatta FX: This final instrument is an odd collection of sound effects, including fog horn-like drones, distant trains calling, and various discordant noises. The next (OK, first) time I get to score a film about ghost trains, I'll definitely know where to come!

In most instruments, the mod wheel tends to be mapped to volume, so that you can control dynamics instinctively. There's a reasonable amount of editing available too, such as filtering or processing via some rather decent effects. A series of factory effect chains is offered to get you going, so even if you start from a pure representation of an orchestra in a hall, there's no reason not to stray into unreality later.

As a Kontakt owner, you're already in possession of a set of plain vanilla orchestral sounds. With Tutti in the picture, you don't gain more individual samples of flute or violin; you gain miniature performances of multiple human beings, each adding their own ornamentation and effects. Used carefully and selectively, these can rack up the believability of your virtual ensemble. Of course you'll always want more — more variety, different cues, new orchestration and so on — but this collection has enough depth to ensure you'll return to it again and again.

With Project SAM Symphobia still in the 'scary money' price bracket, affordable alternatives to Tutti are rather thin on the ground. Boom Library Cinematic Trailers is worthy of consideration, though, its large collection of impacts, whooshes and transitions going beyond the pure orchestral in several directions, thanks to the inclusion of a taiko drum ensemble and sound effects from synths, choirs, and even flaming torches! You might even consider using traditional orchestral recordings, such as those supplied with Kontakt. Then, with time (and considerable skill) you could eventually simulate the sort of effects Tutti delivers. But for most of us mortals, I suspect life's a bit too short for that kind of exercise. I mean, you wouldn't want to invent the wheel every time you cycled down to the shops...