Sontronics' DM-series mics are specially designed for close-miking of drum kits. How do they perform in a real-world session? 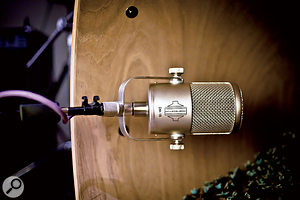 New from British company Sontronics is this trio of condenser microphones, created specifically for recording drums. All three mics are available separately, but they are intended to work as a collection, and have been designed for close miking the kick, snare and toms of a standard drum kit.

The DM1B kick-drum mic is a large-diaphragm, end-address microphone that has a reassuringly substantial look and feel. It comes in a robust aluminium case and has its own onboard, rotating, yoke-style stand attachment, which feels solid and allows for a good variety of angles and positions when attached. The mic has a cardioid polar pattern, a quoted frequency response of 20Hz to 20kHz and, as expected for its intended purpose, an impressive SPL-handling capacity: up to 155dB, with the -15dB pad engaged.

Sontronics claim that the DM1B has been designed especially to capture and reproduce the various characteristics of a kick drum: the beater click, the heavy thump, the boomy decay, and so on. They also say it is well suited to recording bass amps, brass instruments and other loud sources where a high SPL-handling capability is required.

The DM1T and DM1S are designed for toms and snare drums, respectively. They are both small-diaphragm, end-fire, pencil-style condensers, and they look nearly identical. Both have the same nominal bandwidth of 30Hz to 20kHz, and share the same cardioid polar pattern and SPL-handling capability (135dB with the -15dB pad engaged). They each come supplied with a standard mic clip and screw-on drum clamp, to allow the mics to be attached to the drum rims, rather than fitted to a mic stand. Both mics have a nice, solid, 'well-made' feel to them but come in a slightly underwhelming cardboard case. No frequency-response plot was supplied with the review models, but Sontronics claim that each mic has a slightly different response to complement tom and snare characteristics.

I run a small but busy studio, and the mics arrived at my door the day before I was due to begin a four-day recording session with a young, guitar-heavy alt/indie band. After an initial inspection of the mics and a little bit of online investigation, I was happy to throw all three of them straight in at the deep end and see how they fared, thinking that I could quickly swap them out if I didn't like what I heard during the setup period.

For this session, the band were using my in-house kit, which I have recorded many times with various mics. It has quite a large, boomy 24-inch kick drum with fairly standard-sized rack and floor toms. My plan was to use a 'standard' modern drum-miking setup for the session, with a pair of AKG C414s as overheads, a couple of room mics, and each drum close-miked, along with the hi-hat and ride cymbal, just in case they were needed.

Focusing on the DM1B kick-drum mic first, I placed it in my usual position for a close mic on a kick drum with the resonant head removed: just inside the drum, to one side but pointing towards the beater. My initial reaction was good: without any repositioning needed, the kick drum sounded big and full (almost too full), with a good dose of attack, and felt 'ready to go' without the need to EQ. It also seemed to sit quite nicely with my overheads, so I moved on to the DM1S, which I was using for snare top duties.

I used a mic stand for the top snare, rather than the supplied clip, and put the mic in my usual position (a couple of inches above the drum's rim), being careful to try and reduce hi-hat spill with my positioning as best I could. Again, my first impressions were good: I got a full, clear, punchy snare tone, with plenty of attack and a nice 'realness' about it.

The DM1T I used for my rack tom, with the supplied clip and screw-on clamp to attach it to the drum itself. This clamping system seems fairly well designed and allows the mic to be angled in a broad but fairly sensible range of close-miking positions. For live work, I could see it being particularly useful for quick setups. One minor niggle was that the clip supplied with this model felt a little loose, and the mic actually slipped out once during the session. Once the tom was nicely tuned, the BD1T sounded as impressive as its partners, with a nice, clear, full tone and a characteristic that felt right for the drum in question.

The drum-tracking process passed off without incident from the mics' point of view. I tend to leave the drums pretty natural and unprocessed during recording, and I was feeling good about the sounds I had captured.

Once we'd moved on from the drums, I also got the chance to try the DM1B in front of a bass cab. Mixed in with a DI signal, it produced a pretty monstrous bass sound (if I do say so myself). I was actually more impressed with the mic in this application than I was for the bass drum, so whatever tweaking Sontronics have done to make it work with kicks, it also works (for my taste) a treat for bass. I tried it out on a guitar amp as well, just for the hell of it, and was also pretty impressed with the results.

The real test for me with a mic is how it helps me get to where I want to be in a real-world session, and, most importantly, how the sounds I capture hold up or develop at mix time. This part of the review left me scratching my head a little, as even though I was very impressed with the mics from a tonal and general performance point of view during tracking, I found it very difficult to get a full kit sound together, and get the mics to work in the context of the particular style of band I was recording.

A big issue for me with close mics is controlling the spill via gating or, failing that, making the off-axis sound work. This is particularly important when trying to fashion a drum sound that is going to punch through a wall of guitars, so after feeling pretty good about the mics initially, I found myself having to put in quite a lot of time and employ some pretty creative EQ and gating techniques (combined with some very subtly blended samples) to get the spill under control and the drums where they needed to be for this project. I'm reluctant to directly criticise the mics themselves for my mix troubles, as getting a good sound is about picking the right tools for the job, but there was a lot of spill on these mics, and I found the off-axis sound wasn't that complementary to the full kit sound.

I did try the mics again on another session, employing the DM1B outside the kick drum in conjunction with a dynamic mic fairly close to the beater. It really seemed to shine in this particular application, with the close mic providing the attack and the outside mic providing the body and life of the drum. I also used the DM1T on the floor tom this time, and the DM1S on the snare, but positioned a little closer and more carefully. This session required a more open and less processed drum sound, and, combined with a slightly more studio-friendly drummer, the Sontronics mics produced excellent, mix-ready results.

Even though I encountered mix problems, it wasn't a fault of the mics themselves; rather of not using the right ones for the session. All three mics have a clear and full sound, and the high SPL handling gave me confidence while tracking. The specific characteristics or 'tuning' for each mic have obviously been well considered, although they will suit some styles of music better than others, so may lack a little flexibility. The build quality and general feel of the mics is good for the price point, and the included clips and attachments are solid and would be particularly useful for live applications.

The DM1B was the real stand-out for me (although at nearly three times the cost of the other two, maybe that shouldn't be surprising!). Four hundred dollars is not cheap for a fairly specialised mic, but the way it performed in front of a bass amp and bass drum could make a small-studio owner such as myself think seriously about adding it to their mic collection.

Small-diaphragm, pencil-style condenser alternatives to the DM1T and DM1S at around this price point would be the Rode NT5 or, slightly above that, the SE Electronics SE4. Stretching the budget a bit more gets you into the realms of more well-known, general-purpose mics such as the AKG C451. Popular kick-drum mics include the ElectroVoice RE20 and RE320, and the cheaper AKG D112, though these are both dynamic models. The Milab BDM01 is a dedicated kick-drum condenser, but it is much more expensive than the DM1B.

If you're looking for a set of fairly low-cost microphones specifically for drum recording (particularly if you are a fan of using condensers for close mics), to help you achieve a quick, natural, open drum sound, these mics deserve consideration. The DM1B is more expensive but is a good dedicated bass-drum microphone, and is also outstanding for bass-cab miking.