With Sony's flagship sampling reverb processor you can now sample the acoustic signature of any space you want. Hugh Robjohns puts it to the test by sampling the unique acoustics of an award‑winning concert hall.

At the time of my review in SOS December 1999, the Sony DRE S777 was running version 1.0 software and offered only a single CD‑ROM of sampled acoustics. However, since then Sony have continued developing it and have since updated the operating software to version 2.0, as well as releasing three further CD‑ROMs (see 'Real Spaces' box, later). The most powerful feature of the new software is that you can now sample acoustic spaces in true stereo, a feature which is likely to appeal to a diverse cross section of the audio industry. For example, recording studios could acquire samples of their various rooms for use when overdubbing in different venues, and post‑production studios could sample the ambience of a filming location in order to be able to reapply it to added dialogue tracks. 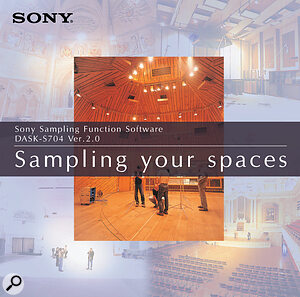 In order to use this new facility, you need not only the DASK S704 self‑sampling software (supplied on a CD‑ROM with a 64Mb memory stick to store the results), but also a pair of decent microphones, a dual‑channel mic preamp, and a full‑range dual‑channel PA system. The DRE S777's analogue inputs need to be connected to the amplified mic signals, while its outputs feed the PA system. The PA rig doesn't need to be anything excessive; it only needs to have a reasonably wide bandwidth and be able to output a sound pressure level of around 100dBA — roughly the equivalent of a loud instrument, sufficient to energise the room and its characteristic reverberation. However, the higher the quality of both the PA and the mics, the better the end results. I witnessed a sampling session in a theatre near Sony's headquarters in Basingstoke, where a pair of Schoeps CCM3s and a compact two‑way Sony 'suitcase' system with subwoofer performed admirably! (See 'Sampling In Action' box for further details of the demonstration.) 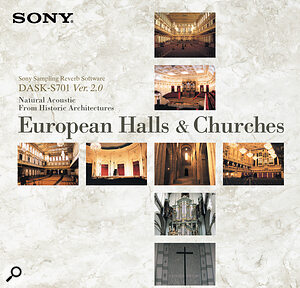 The Sony system analyses the reverberation pattern caused by a time‑stretched pulse (TSP) — this is essentially a rapid sine‑wave frequency sweep lasting a couple of seconds. The reverb generated from this frequency sweep is captured and stored on the memory stick, but requires further internal processing, or 'compiling', before it can become a usable reverb program. Typically, when sampling an acoustic space, the DRE S777 will need to generate a number of TSPs, because background noise will need to be averaged out in order to make a usable program. This averaging process becomes progressively more effective the more TSPs are used, with a maximum increase in signal‑to‑noise of 18dB being possible when 64 TSPs are used. 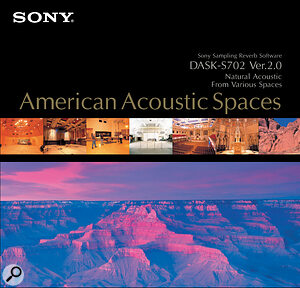 When sampling a space, the speakers should be set up where the sound source would normally be, and the microphones placed in a good listening position. There are three possible sampling modes: standard rate (44.1 or 48kHz) sampling for either 5.5 or 11 seconds; or double rate (88.2 or 96kHz) for 5.5 seconds — however, the 11‑second standard and 5.5‑second double rate sampling modes require an optional DABK S703 DSP expansion board for sufficient computational power. The reverb samples are stored on a supplied 64Mb memory stick inserted into the front of the S777. Given that a 5.5‑second standard‑rate sample requires around 2Mb of storage, and that the corresponding compiled reverb program comes out at roughly 25 percent smaller than this, the memory stick ought to accommodate about 40 standard‑rate programs.

The compiling operation is almost trivial — select the relevant samples and start the process. Mid‑way though the procedure, the machine provides the option to delete any data which arrived prior to the direct sound — pre‑echoes. With most natural reverberation, pre‑echoes are irrelevant and should be removed, but if you were sampling plate reverb, for example, pre‑echoes might well be an integral part of the reverberant sound. The software next displays information about the reverb samples, including the level of noise — this should be below ‑60dB, otherwise the sampling process ought to be repeated with more TSPs. However, if everything is satisfactory the compiling process will then produce the final reverb program.

The DRE S777's new operating software also allows you to import reverberation impulse responses by saving them to the memory stick. This data can then also be compiled as described above to produce a new DRE S777 reverb program. It is Sony's intention to create a web site where users may post and download impulse responses and programs for the S777.

The self‑sampling software for the S777 really opens up the potential of this innovative machine. The whole sampling process is very fast and easy to perform, needing little in the way of equipment and no particular expertise. But, most importantly, the results can be impressively accurate and very usable. Although a specialised machine, once any studio acquires one, they'll almost certainly wonder how they ever coped without it!

I was able to attend a demonstration of the DRE S777's sampling abilities at the Anvil in Basingstoke, an award‑winning concert hall whose acoustics are among the best in Europe — Deutsche Grammophon's acclaimed 1998 recording of Berlioz's The Damnation of Faust was recorded there, for example. a pair of Schoeps microphones were first sampled in positions roughly a third of the way back in the hall, and around four metres apart. Then they were moved four metres further back and sampled again. In both cases 16‑sweep sampling passes were used, and versions were sampled with both omnidirectional and cardioid mic capsules employed. When compiled, these samples provided a degree of flexibility in the finished programs, allowing the choice of two distances and two polar patterns, as well as various four‑channel surround modes.

The demonstration worked perfectly first time, and the whole procedure seemed remarkably quick and easy, but the key question is how accurate was its recreation? The empty hall has a fairly generous and smooth reverberation, but with pronounced slapback from the rear wall. Using the S777 to apply the sampled acoustic to a variety of close‑miked instruments and voice recordings, I found the results to be convincing in stereo, portraying a realistic impression of size and emptiness and with the recognisable sonic character of the theatre. Using the S777 in four‑channel mode (making use of all four sampled mic placements to provide two stereo pairs) and with the outputs routed to a 5.1 speaker arrangement, the distinctive slapback from the rear wall was recreated to perfection. Listening in a relatively dead monitoring environment, the result was uncannily accurate and the illusion of space that was created was incredibly lifelike. The direct comparison between the real environment and its sampled recreation was enough to convince me of the merit of the convolution technique and of Sony's implementation of this technology in particular. 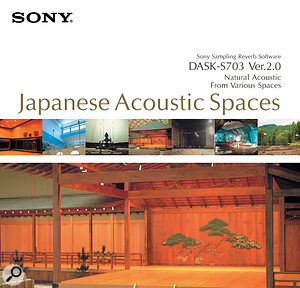 The standard CD‑ROM shipped with the S777 is entitled Halls, Churches, Studios and Plates. This is a collection of general purpose anonymous acoustic spaces, and includes two halls, two churches, three studio live rooms, two plates, and a drum room. All are provided with a variety of source and microphone positions, providing subtle alternative reverbs, and all portray the almost uncanny realism which is the hallmark of the machine.

The three new disks are entitled: European Halls and Churches, American Acoustic Spaces, and Japanese Acoustic Spaces. These all carry version 2.0 software and offer a greater variety of mic positions and types than the original generic disk. There is also considerable technical information about microphone positions, the structure of the halls and the nature of the recorded reverberation.

The halls section of the European disk includes samples of the Amsterdam Concertgebouw, the Vienna Grosser Musikvereinssaal, and the Concerthaus in Berlin. There are also three churches: Westerkerk in Amsterdam, Jesus‑Christus‑Kirche in Berlin; and St. Vincent de Cardona in Spain.

The American disk provides four studios (Avatar Studio A, Ocean Way Studio B, Enterprise Studio E2 and Giandomenico Studio), the Mechanics Hall, the Cathedral of St. John the Divine, and a boxed canyon in the Grand Canyon — the latter a fantastically open ambient acoustic.

The Japanese disk starts off with the Sedic Audio Studio in Tokyo, providing seven variations of the main studio, plus samples from the vocal booth, the control room, a tea room and a telephone box! The one hall is the Yokohama Nohgakudou, while the more unusual spaces include the Tamanoyu Bathhouse, the Ohyaishi quarry, the Kamaishi mine, the Goto Planetarium dome, and the Hotaka mountain range!

The combination of the four disks provides a vast and impressively usable collection of acoustic spaces and reverberation characteristics, and provides something for pretty much any occasion.

The ability to sample your own favourite acoustic spaces and apply their characteristic reverbs to other recordings is revolutionary. I'm sure that the Sony DRE S777 will quickly gather a fanatical user base in a wide range of recording environments.