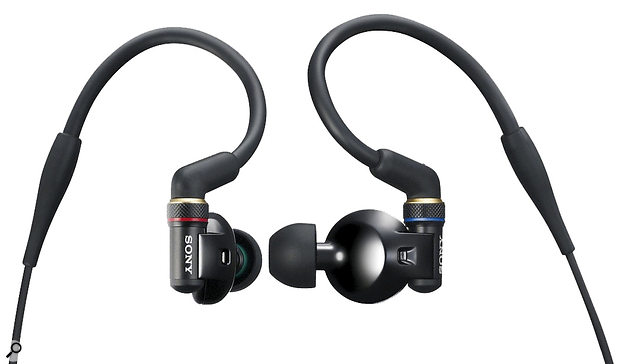 Sony's top‑of‑the‑range dynamic in-ear monitors have a kind voice, with all the volume and extension you'll need for stage use and on‑the‑move mixing.

Sony's latest high‑end IEMs (in‑ear monitors) use a single dynamic driver to produce all frequencies, in contrast to the majority of rival systems, which use multiple 'balanced armature' (BA) drivers. These incorporate much smaller diaphragms that are moved indirectly, and crossovers are used between the drivers in order to achieve a faithful result. As with any type of transducer, there aren't strict 'rules' as to what each type of driver sounds like, but there are some generalisations that hold up to criticism. So far, I've not heard a multi‑BA device that matches a good dynamic for low‑ or high‑frequency extension, for example, while high‑end BA designs tend to lean toward detailed mid‑range with less impactful bass.

In order to house the large dynamic drivers, the MDR7550s have a very odd design, with side‑firing drivers channelling sound through a small tube into the ear canal. Three pairs of hybrid silicone and rubber tips are provided, but I found the medium tips too small and the large ones too large for a good seal, so using some of the foam tips I had helped a great deal. Getting a good seal is absolutely vital, as bass response and stereo field alter depending on the depth of insertion. The over‑ear cables are made of a strangely named material called Teknorote, that holds its shape well and keep the MDR7550s nicely in place. They are also replaceable, which is great given the significant investment these IEMs represent.

The MDR7550 have a very natural balance, with the large, smooth tone of a dynamic IEM but a voicing that reminds me of high‑end, multi‑driver balanced armature setups. Low extension underpins the sound rather than stepping all over it, with sub-bass presented subtly, and while the extreme highs roll off softly, they do roll off. The overall tone reminds me a little of the venerable Sennheiser HD650s, albeit with a little bit of a closed‑back style mid‑bass hump. To my ears, flattening the frequency response completely required a little shelf lift at the extreme bottom and top end, and a tiny cut around 400Hz.

Mid‑range detail is presented nicely, and mid‑range transients (like snares) seem to be particularly well described by the 7550s, while tambourines, cymbals and other high‑frequency transients are a little masked. The sound is still pretty complete and warm, though, and I found them great for casual and critical listening, as well as ideal for on‑stage use.

If you're checking for subtle sibilance or the exact placement of high-frequency transients then another model may suit, since they do smooth out this region a little. This relatively soft voicing is welcome for live use, though, where the sharp edge of an SM58 vocal or clattering hi‑hats will drive you to tinnitus with many models. When I tried using them as live stage monitors, I found that after‑market foam tips were a necessity in order for me to achieve enough isolation from surrounding noise.

I found the MDR7550s to be a pretty individual design: a large‑driver dynamic model with balanced extension, a soft and slightly muted voice and a wonderfully revealing mid‑range. To me they sound very similar to a warmer Shure SE535, but a little less stark and scientific, with a little more extension.

They are of the kind of quality that reveals subtle sonic features such as the differences between DACs or MP3 codecs very nicely, but they never sound sterile. Their warm voicing won't suit all listeners, but fans of the HD650s and less forward-sounding studio monitors will find them accurate and to their tastes for both live monitoring and on‑the‑move studio work. They've quickly become some of my favourite IEMs, proving that dynamic driver designs still have a place in the world of high‑end in‑ear monitoring.

The MDR7550s are great in-ear monitors for live use and mixing on the move. The effortless, subtle extension and relaxed but detailed presentation are just right for accurate live monitoring. They lack the harshness of many IEMs, and present the high end in a useful but comfortable way. If you prefer a relaxed monitoring tone, you'll find them excellent for laptop mixing too. They are at the upper end of what you'll pay for a 'universal' rather than custom-moulded IEM, but they are very good indeed.