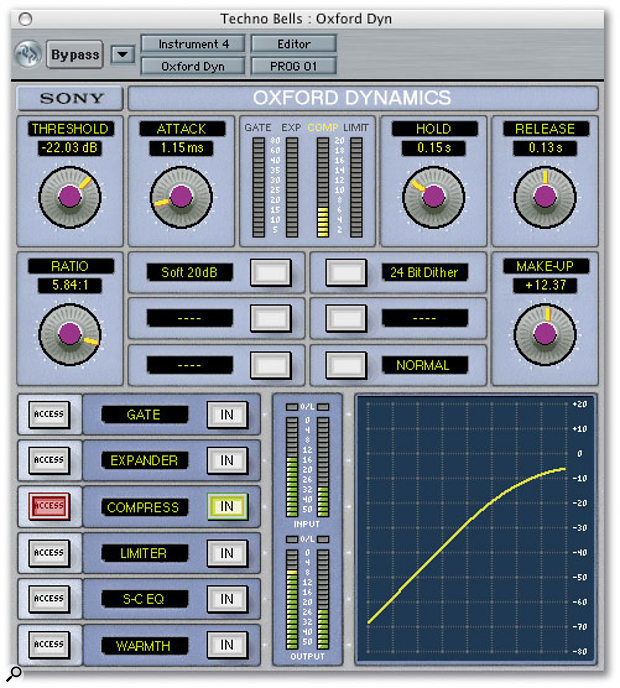 Sony's Oxford digital mixers are out of many people's reach, but Pro Tools and Powercore users can now get their hands on their sophisticated processing tools.

Sony's Oxford Dynamics plug-in is taken directly from their OXF3 digital console and is based on the same DSP code, offering independent compression, limiting, gating and side-chain EQ sections, each with their own dedicated windows. It is available for Pro Tools HD and Mix TDM systems as well as for TC's Powercore card, and also in an RTAS version for Pro Tools LE systems, though the 'Multi' surround mode described later is not supported in LE systems, and external side-chain access is not available on the Powercore version. The Powercore version can be used within host software that supports either VST or Audio Units; both Pro Tools and Powercore versions run on OS X and Windows XP, and the Pro Tools versions also work in Mac OS 9. Powercore users effectively receive a customised build of the program that will only work on a system hosting their particular Powercore card or Firewire unit, while the Digidesign versions are protected by the now-familiar iLok system. The benefit of this is that unlimited backups may be made and the software may be installed on multiple machines, needing only the Powercore unit (or the iLok in the case of Digi systems) to run.

The design takes advantage of digital technology's ability to 'look ahead' to anticipate signal peaks, where a feed-forward architecture and logarithmic side-chain processing is utilised to achieve accuracy of control without sacrificing musicality. Feed-forward simply means that the amount of gain reduction is calculated based on the signal level present at the compressor's input rather than at its output. Most modern compressors work this way, though some early models did derive their side-chain input from the compressor's output.

When you first open the plug-in, you see the compressor window, with the familiar compressor controls at the top of the screen along with gain-reduction metering and side-chain access buttons. The operational paradigm follows the usual Threshold, Attack, Hold, Release format with variable ratio and variable make-up gain. I'd have liked an Auto setting for handling complex mixes with changing dynamics, but that's about the only obvious omission. To the bottom right of the compressor screen is the compression curve, which changes according to the control settings, while to the left are In buttons for the six processing sections (Gate, Expander, Compressor, Limiter, Side-chain EQ and Warmth) as well as Access buttons that switch the screen to display the relevant controls for the chosen section. The physical layout of the screen follows that of the Sony console very closely, including the rather 'in your face' colour scheme. Full input, output and gain-reduction metering is always available. 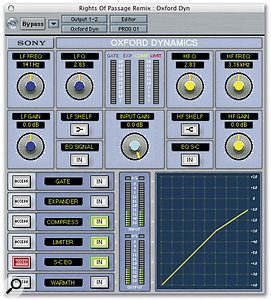 Only the Pro Tools versions of Oxford Dynamics support external side-chain signals, but all the versions allow you to EQ the side-chain signal.Among the additional features are the ability to EQ the side-chain signal, with two fully parametric (or shelving) bands available, and an audition function allowing you to listen to the equalised side-chain signal. The compressor's knee characteristic can be adjusted from very soft to conventional hard-knee over a series of steps. The limiter section can be set quite independently of the compressor and there's also a nice 'warmth' simulation section. Additionally, you get gating and expansion to help clean up any programme noise that's emphasised due to the effect of compression. As you'd expect, all the parameters can be automated from within the host software providing plug-in automation is supported.

You can also select from three time-constant behaviours — Normal, Linear and Classic, where Classic is based on the type of curve used in the Dbx 160 compressor. An Options menu allows you to change how the mouse movement interacts with the control settings, set the meter peak hold times and save or load presets. Powercore users can also select a no-latency mode, which banishes additional latency at the cost of greater CPU overhead. Normally this isn't needed, but it can be useful to activate it temporarily when monitoring through a plug-in while recording.

Like the compressor, the limiter also uses lookahead to anticipate oncoming peaks, which means it can respond very quickly without overshoots. The limiter time constants are under full control of the user (though of course there's no Ratio control, as the ratio is effectively preset to infinity). For controlling noise, you can use either expansion or gating; a range control sets the degree of gate/expander attenuation when the input signal is below the threshold.

The Warmth control is described as working by 'increasing the density of higher sample values', which sounds rather like the way the Sony Inflator plug-in works. Warmth also provides a 6dB soft-clip zone and the overall effect isn't unlike that of a gently overdriven tube circuit.

TDM and Powercore users also get a buss compressor version of the plug-in, which can be inserted into surround format busses (supporting up to 5.1 surround) to provide properly linked surround compression. The gate and expander are omitted to conserve processing power and a simple 24dB/octave variable low-pass filter replaces the side-chain EQ, though it may also be used as an LFE filter if required. Additional control is provided so you can decide how much the sub levels affect the main five channels, you can compress it independently, or you can exclude the sub channel from contributing to the side-chain signal and from being processed, if you prefer.

Like Sony's other plug-ins, Oxford Dynamics is easy to use and predictable in operation, yet very musical-sounding for all that. It has enough adjustment to allow it to compress almost transparently, but you can coax it into pumping where you need to, and having a choice of time constant behaviours means you can get very close to the sound of a number of popular hardware compressors. In normal use, this compressor is kind to transients, but where you feel the need to add back some weight, bite or air, the Warmth section will help you do so in a fairly natural and very controllable way. It really does make the sound bigger and warmer, without overcooking the levels, and succeeds rather better than most tube emulation software. You also get the option to use high-quality dithering for bit-depth reduction.

The real benefit of the Oxford Dynamics plug-in is that you get all the tools needed for routine dynamics processing in one package and you can use them in virtually any combination. The sound quality is definitely a step up from what you'd expect from the vast majority of host-powered plug-ins, and because the digital code is derived directly from the Sony OXF3, there should be no material difference in sound quality other than that imposed by the converters in your audio interface.

The compressor is the mainstay of the package and it works assertively and musically, responding to the controls in a friendly and predictable manner. Indeed, it works so well that very soon you start to take it for granted. The gate and expander also work exactly as you'd expect while the limiter has enough adjustment to be used either as a simple gain-capping device or as an effect in its own right. As a bonus, you get the Warmth section, which isn't something normally associated with dynamics, but in this case it complements the rest of the kit perfectly. If you also have the excellent Sony EQ, you're well on your way to turning your DAW mixer into a Sony soundalike, which is certainly no bad thing!

Oxford Dynamics costs a little more than a run-of-the-mill dynamics package but it provides all the necessary tools to do a great job, and throws in a couple of very effective enhancement tools as well.