The Z3300A comes from the new SE Electronics factory in China and represents the middle ground of their current capacitor microphone range. Offering three switchable patterns, the Z3300A utilises a 1.07-inch, dual-diaphragm capsule, where the six-micron-thick gold-sputtered mylar diaphragms are centre terminated in the same same way as many 'classic' European capacitor microphone capsules. Class-A FET circuitry is used for the onboard preamplifier, and all the circuitry is based around discrete components mounted on three glass-fibre circuit boards. One board supports the miniature toggle switches for controlling pattern, pad, and low-cut filter, while the remaining two support the preamp and pattern-switching circuitry. The preamp feeds into a transformer-balanced output stage, and a standard 48V phantom power source is needed to operate the microphone. 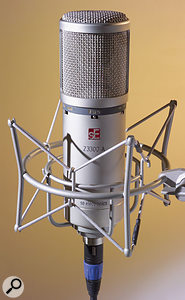 Photo: Mark EwingThe polar pattern can be switched between cardioid, omni, and figure of eight via a small toggle switch located just below the grey trim ring. The red embossed SE logo denotes the live side of the mic. To the right of the pattern switch is the low-cut filter switch, and to its left is a switchable 10dB pad. The Z3300A features a wide frequency response, specified as 20Hz-20kHz, and includes a modest degree of high-frequency lift, starting at a little over 1kHz, plus a gentle presence peak centred at around 14kHz, lending the sound an open and airy quality but without going so far as to sound obviously coloured. As with most large-diaphragm mics, the Z3300A is designed with the studio vocalist in mind, though this particular model is also recommended by the manufacturers for recording choirs and classical instruments. The microphones are built to a fairly high standard of consistency, so any two can be used for stereo recording without having to worry about sourcing matched pairs. The low-cut switch brings in a 100Hz filter and, in addition to reducing the level of stand-borne low-frequency noise, it is also useful in balancing the proximity-effect bass rise when the mic is used fairly close to the singer's lips.

The SE Electronics Z3300A's capsule is protected by an open-weave metal grille with a finer secondary mesh to help reduce popping and to provide RF screening for the capsule. All the body metalwork is nicely machined and finished in what looks like satin nickel, where the main sleeve of the body is held in place by a heavy machined base that can be unscrewed to provide access to the circuitry. Overall the mic measures 60mm x 192mm, so it is fairly chunky. The XLR output connector protrudes from the bottom of the mic and is threaded on the outside so that it can be screwed into the included shockmount, a substantial metal affair with fabric-covered elastic cords — spare elastic cords are provided. A thread adaptor is included for fitting to European or US microphone stand threads, and the whole kit comes in a foam-lined, aluminium case.

Technically, the mic performs well, with a respectably low equivalent noise level of 20dBA and a maximum SPL of 125dB without the pad switched in. Although there are quieter mics and mics that can handle more level, these figures are typical for a microphone of this type and are perfectly adequate for any normal studio application. Also fairly typical is the sensitivity of 16mV/Pa ±2dB. In practice, this means that when recording studio vocals there should be plenty of output, so you won't be running your mic preamps flat out.

While technical performance is important, what really matters with a mic of this type is the sound — whereas small-diaphragm mics tend to be built to sound as accurate as possible, large-diaphragm mics are generally designed to have a sonic character that is flattering to vocals rather than being ruthlessly honest. At the same time, the aim is still to leave the end result sounding subjectively natural, so the tonal tweaks have to be subtle to work properly.

As usual, the first test with this mic was carried out with vocals, both sung and spoken. As the specification indicated, the electrical noise of the mic was low enough to be insignificant (even when using moderate amounts of compression) and I was pleasantly surprised by the tonality of the mic, which seemed to offer 'more of everything'. In comparison with some of my other studio mics, most of which cost rather more here in the UK, I felt that the Z3300A left them sounding 'smaller', but it's hard to say why exactly — the low end and high end seem perfectly balanced, combining richness and density with an extended but very smooth top. With certain vocalists, the high end can become just slightly sibilant, but this can usually be redressed by changing the mic position slightly or by employing the old trick of fixing a pencil vertically in front of the mic grille using an elastic band. (I still don't know exactly how this fix works, but I tried it on this very mic and it certainly does!) However, there is no doubt that this mic is flattering in a very stealthy way, and that the sound it produces is inherently 'right' without needing heavy EQ to patch it up. Also, because there are no narrow-band frequency boosts, it should sound good on a wide range of singers.

With acoustic guitar, the Z3300A delivered a full, believable sound with fantastic string-pluck definition. If you like an acoustic guitar sound that seems to have been sprinkled with fairy dust, this mic delivers it. Further tests in omni and figure-of-eight mode confirmed that the tonality stayed reasonably consistent between the patterns, though of course the omni option lets in a lot more of the room sound.

Given its affordable UK price (but also bearing in mind that you can buy capacitor mics for half the price these days!) I feel the Z3300A offers exceptionally good value because of its very smooth, rich sound and its apparent versatility. When you can get this kind of quality so affordably, it seems to me like false economy to go out and buy a cheaper mic, where the corner cutting often shows up in the sound — however, there are some valid and very worthy alternatives at a lower cost if you don't need multiple patterns. Having switchable patterns means the Z3300A is useful in a number of studio and location recording situations, and its sound seems friendly to most vocal and instrumental sources. In fact my only negative comment is that the satin finish shows up finger marks, especially on hot and sticky days like today, and if that's the only problem then I think SE Electronics are on to a winner. Since setting up their own factory last year, the quality of both manufacture and design has taken a big step forward, which means that mics like the Z3300A should appeal not only to the more discerning project studio operator but also to professionals.

While you can buy cheaper mics, the Z3300A offers a high level of performance plus the flexibility of multiple patterns for a very attractive UK price.