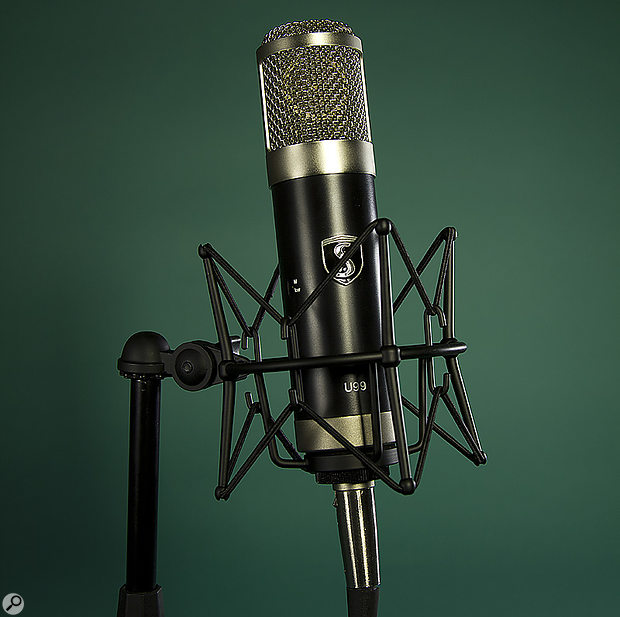 Soundelux are back with another premium valve microphone — this time a modern interpretation of the venerable Neumann U67.

Founded by David Bock, Soundelux USA are a very well-known and respected name in the world of microphones. The U99 reviewed here is designed by David and built by Soundelux USA. The company specialise in building new microphones that capture a classic sound, and in the case of the U99 on review here, Soundelux take their lead from the vintage Neumann U67, which was built back in the 1960s. Constructionally, the mic follows a classic cylindrical design but reveals more switched options than most microphones, which may account for the Soundelux USA claim that the U99 offers an “extended detail” interpretation of the U67.

The mic is solidly built and quite weighty, at a hair over 700g. Its basket framework is finished in what looks like satin chrome and the body is in satin black. Unscrewing the base ring allows the body sleeve to be removed, revealing a single circuit board populated with metal film resistors, WIMA capacitors, a very large output transformer, and the wire-ended valve soldered directly to the circuit board. There are no pluggable connectors to cause problems. Behind the circuit board are some components wired ‘point-to-point’ between the valve leads, and the PCB, and also between some of the transformer connections and the PCB. 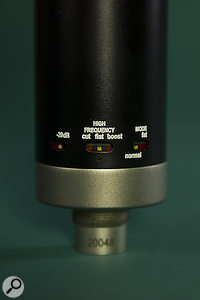 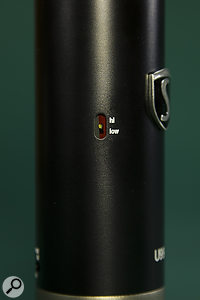 The mic has a HF cut/boost option, which acts at either 2.5 or 5 kHz, depending on the position of the Hi/Lo switch.A three-way Cut/Flat/Boost switch, when in its Cut position, allows the user to impart a subtle cut at either 2.5kHz or 5kHz, as selected using the Hi/Lo switch to the left of the badge, which in both cases also imparts a 1dB gentle shelving cut at 10kHz. David Bock explained that this is a little more range than the original U67 circuit it’s modelled after, which only adds cut in order to compensate for the capsule’s natural 10kHz boost so as to flatten the mic response at the high end. The Flat setting applies to the amplifier, not the overall response, which means the capsule’s natural 10kHz boost is allowed to come across. Boost brings in a gentle shelf, starting at 5kHz, and also introduces a 1dB peaking boost at 10kHz. These EQ settings are active, using feedback around the valve. Similarly, the LF end can be set to Normal or Fat. Finally, there’s a 20dB pad switch, and all the switches are recessed to avoid accidental operation. However, there’s no low-cut switch so you’ll need to take care of that on your preamp or mixer.

The K67 symmetrical-backplate capsule has centre-terminated diaphragms, tensioned to avoid what Soundelux USA have identified as a 5kHz rise prevalent in many vintage 67s. Like the U67, the U99 is a multi-pattern microphone, and the valve used is a new-old-stock EF732 sub-miniature pentode, run as a self-biased triode.

Power comes from the included N470MP linear PSU, which may be wired internally for 230, 115, or 100 Volts AC operation, again based largely on the original Neumann design and engineered to deliver clean, stable power to the microphone. The PSU is a solid, steel-cased affair with no controls other than a power switch and a rotary pattern control knob. This is continuously variable from figure-8 through to omni passing through various widths of cardioid along the way. The PSU connects to the mic via the included six-pin XLR cable. An elastic cradle shockmount is also included as is a wooden storage box for the microphone.

To put some numbers to the mic, its response is flat to within ±2dB from 30Hz to 16kHz, and it has a sensitivity of 2mV/Pa. Its A-weighted self-noise figure is 13dB (25dB unweighted), and the distortion at 1kHz remains below 0.05 percent up to an SPL of 110dB. At 128dB the distortion rises to 2 percent, where the designers tell us that the added distortion is primarily second harmonic. The pad adds another 20dB to those SPL figures. 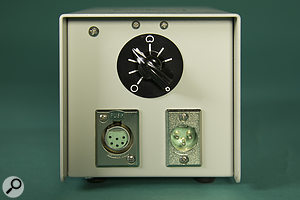 The PSU features a continuously variable pickup-pattern selector.Soundelux recommend the mic for vocals, acoustic guitar, acoustic bass, piano and drums, so it seems that it is intended to take on just about any job, and those switchable HF and LF settings should certainly add to its versatility.

With everything set flat and starting with a cardioid pattern, the mic delivers a confident but not obviously coloured sound on vocals, with plenty of detail — but not at the expense of smoothness. Bringing in the Fat switch adds a touch of warmth to the lows. As with many large-diaphragm valve mics, the sound does tend towards flattery when used on voices, but not in a way that sounds unnatural. Even though the specified frequency response extends only up to 16kHz on paper, there’s plenty of information above that as the response falls off in a fairly relaxed way, though the choice of response shaping undoubtedly helps create the vintage sound this mic is designed to capture. The switched EQ settings are reassuringly subtle but can really help when matching the mic to a particular voice. Of course you may find another mic that suits a specific voice better, but if you want one mic that can adapt to a number of different singers, this would be a good choice.

Opening up the polar pattern to omni produces a more spacious, airy sound that, while tonally similar in most respects, lacks the proximity effects of the cardioid patterns just as you’d expect. The figure-8 pattern is similarly open sounding but this is the pattern that exhibits the strongest proximity effect — which is again exactly what you’d expect.

My acoustic guitar tests also confirmed the mic was more than capable in that department, and if you need to accentuate the ‘zing’ slightly by using the high boost setting, the mic is quite happy to let you do it. Noise was never an issue, and loud sources didn’t cause any problems either due to the 20dB pad settings. Electric guitar also fared well, though, as always, capturing the electric guitar is as much an art as a science, mic position relative to the speaker making a huge difference.

The short wrap-up then is that, once again, David Bock has come up with a very solid all-rounder of a microphone with a classic flavour that can compete on equal terms with just about any valve mic in the same price range. In comparison with my other mics, I’d say that its character sits comfortably between those models that are ‘warm and cuddly’ and those that have an obviously airy tonality. While not a budget mic the price is not unreasonable given the quality on offer, and the U99 is certainly built to last.

There are numerous companies offering hand-built interpretations of classic valve microphones, including Telefunken, though there are also valve mics available at various prices from companies such as Rode, MXL, Lauten, Lawson, Avantone, Blue, Aston, sE, Sontronics and others — all are worth trying if you’re looking for a microphone to suit a particular voice (such as your own!).

This is a quality mic backed by David Bock’s considerably expertise in designing and voicing microphones.