The concept behind the Soundevice Digital DIFIX is, as the name implies, to ‘fix’ your DI recordings. 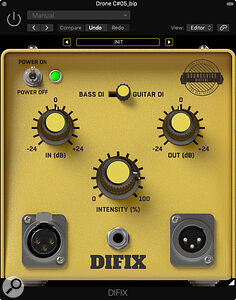 More specifically, it’s intended to improve the signal you capture from guitars and basses fitted with conventional passive pickups. While Soundevice Digital’s claim that the input impedance of most audio interfaces’ instrument inputs “is not high enough to make your pickups work properly” is a little questionable (I’d feel comfortable DI’ing guitar/bass with passive pickups into anything with an input impedance over 500kΩ), there’s more to this than snake oil...

Not all high‑impedance input stages, whether in DI boxes or audio interfaces, interact with your guitar pickups in quite the same way as a real guitar amplifier does, because the resistive value is not the only important factor. In my experience, the DI box approach can produce lovely, clean results, which is great if it’s the sound you want, but they can also sometimes sound somewhat ‘sterile’, losing a little life, and the instrument might not feel as responsive as you’d like it to when playing.

DIFIX claims to restore strength and brilliance to your tone, not by changing the actual input impedance (something over which it clearly has no control) but by using a specially voiced, multi‑parameter parallel processing section that aims to compensate for any compromises your input stage might impose. We’re told that DIFIX runs several internal tasks that include tonal manipulation and some analogue saturation to add fatness, and that there are multiple multiband processes, but the designers are pretty tight‑lipped about the actual mechanics.

Not all high‑impedance input stages interact with your guitar pickups in quite the same way as a real guitar amplifier does.

DIFIX is compatible with VST/AAX/AU DAW platforms on both Windows and Mac OS with protection via a personal key file that allows you to run it on more than one machine. Its GUI can be resized and numerical values can be entered for the controls if you prefer. It runs in mono or stereo and, other than a Bypass switch and separate Input and Output level adjustments, it really has only two controls. One is a switch to select between guitar and bass. The other is an Intensity control that adds the processed signal into the original dry signal, and runs from completely dry to 100 percent processed.

That Input gain control adjusts how much signal is going in the DIFIX plug‑in so it affects how strongly the internal dynamic processing will react. The plug‑in does come with presets but there’s so little to adjust that you may never need them.I suppose the big question is whether or not it does what it claims to do — and certainly when recording clean guitar or bass the answer has to be yes. The sound became a little more ‘analogue‑like’, for want off a better catch‑all phrase. The highs in the guitar sound remain intact but without becoming brittle, and when playing through DIFIX the playing feel has a natural spring to it. Basses also feel a little fatter and slightly more responsive but, at the same time, the plug‑in doesn’t take you too far from your original sound.

You still need to plug into a high‑impedance input to get the best from this plug‑in, but for something so affordable and so straightforward to use, it certainly helps guitars and basses behave in a more ‘organic’ way.