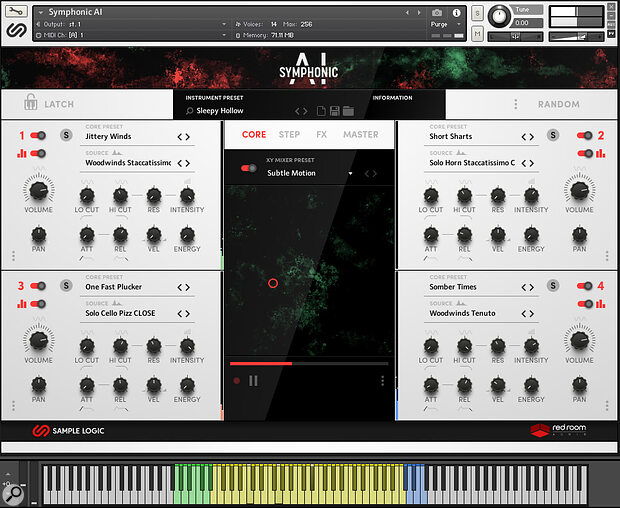 Sample Logic have teamed up with Red Room Audio to deliver a highly animated orchestral instrument.

We’ve reviewed a number of Sample Logic’s sample‑based virtual instruments over recent years. Many of these titles — Motion Keys, Cinematic Guitars Motion, Bohemian and Morphestra 2, for example — are built around a powerful Kontakt‑based front end. As well as allowing the user to blend four sounds, the engine includes step‑based sound animation of notes and effects, a whole array of sound‑shaping options and a comprehensive suite of effects.

In the main, these products are aimed primarily at the media composer market and all of the above titles provide what might best be described as ‘hybrid’ sounds, combining conventional, synthetic and processed core sounds with plenty of potential for scoring applications. However, the subject of this review is somewhat different. While Symphonic AI (which stands for Animated Intelligence) features the same underlying engine (albeit with some notable new additions), the sounds are built from a palette of deeply sampled orchestral instruments supplied courtesy of a collaboration with Red Room Audio. In principle at least, the sample set might deliver more conventional, orchestral‑based, scoring options. So just what do you get when you combine some high‑quality orchestral sounds with a sophisticated and creative playback engine? Let’s find out...

Inside The Logic Room

Sonically, Symphonic AI is built from around 13GB of Red Room Audio sample content and presented as 900+ individual instruments and full presets. At this point, a little Sample Logic terminology is useful to explain how the samples are organised within the instrument.

At the most basic level, a ‘Source’ is an individual sound preset. In this case, the majority of these are multisampled (for velocity), single‑articulation, orchestral sounds, ranging from solo instruments (for example, a violin or trumpet), ensembles (for example, chamber or full orchestral strings) and mixed ensembles (strings and brass, for example). Strings, brass and woodwinds are all well represented with different Source presets covering a good range of performance articulations such as sustained, staccato, pizzicato, tenuto, vibrato, etc. However, the Source presets also include other orchestral elements such as choir, percussion, bells, piano, mallets and, interestingly, a decent crop of non‑orchestral sounds based upon synth sources. The latter bring a definite ‘hybrid scoring’ element to the palette of sounds. 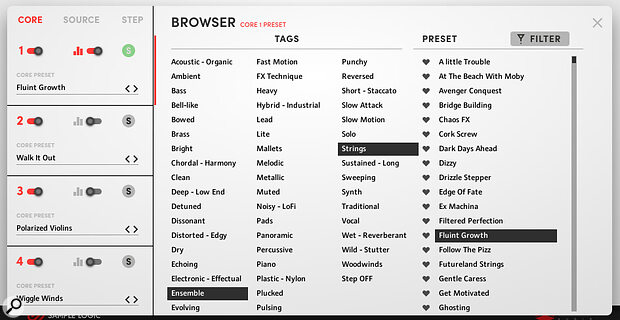 At the next level is a ‘Core’ preset, which is based upon a single Source but includes all the step‑based animation options and effects settings. And, at the top level is the full Instrument preset, which combines up to four Cores and that can include additional effects options and animation for the central XY Core Mixer pad that is used to adjust the balance of the four Cores during playback. Needless to say, Source, Core and Instrument presets are all selectable via a combination of filters, favourites and tags, within the very well‑featured Browser. Selective loading of particular elements of a preset (for example, just the sounds or just the step‑animation settings) is possible, as is selective randomisation for sound creation. Incidentally, effects and animation presets are also provided and accessible within the control panels for the individual Cores.

Many of the parameters include step‑based animation like the new Intensity parameter available in each Core.

The fundamentals of the engine UI are similar to that found in Motion Keys and Cinematic Guitars Motion. Access to the Browser is provided top‑centre, with the macro‑level control panels for the four Cores dominating the main display and sitting either side of the XY Core Mixer. Each of these Core macro panels provides options to mute, solo, pan and set the overall volume for the Core. You can also access both Core and Source presets from here. Each Core panel also includes low‑ and high‑cut filters (each with optional LFO control), high filter resonance, attack and release settings, MIDI velocity sensitivity and ‘energy’ (essentially a combination of compression, saturation and distortion).

New in this edition of the UI is the Intensity control for each Core. This controls the velocity sensitivity of the hi‑cut filter, but you also get the option of step‑based animation of Intensity by clicking the small step icon located just above the knob. If you load a Core preset that is a little too bright for your needs at high velocities this is where to look first; just dial back on the Intensity control.

Another new feature is that, when setting the MIDI note range for each Core, the keys on Kontakt’s mini keyboard display are now colour coded to provide a helpful visual cue. Where two of more Cores overlap, the notes are displayed in yellow. However, for notes where only a single core will sound, the key colour matches that of the (very narrow!) level meters at the edge of each Core macro panel. 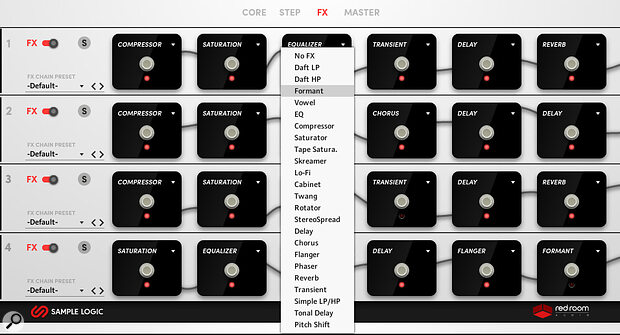 As well as the Core page, the main windows can be tabbed between the Step, FX and Master pages. The FX and Master pages are fairly straightforward in operation and offer individual effects chains for the four Cores (six effects slots for each Core) and a ‘master’ effects chain with a further six slots. Some 24 effects types are available, and these span the usual suspects from EQ, dynamics, ambience, overdrive/distortion, modulation and creative filters. For extra animation of your sounds, each effect also includes one parameter that can be animated via a step sequencer. The whole effects system is easy to use but also very flexible.

Where things get less straightforward — but perhaps also more intriguing — is the Step page. When first opened, this shows separate velocity step sequencers for each of the four Cores. You can engage/bypass the step sequencer for each Core, define different step numbers, set individual step sizes and different sync speeds. Yes, you can set all four Cores to 16 steps of 16th notes but you certainly don’t have to; the potential for configuring complex rhythmic patterns is considerable.

Clicking on the small pencil icon available for each Core switches the Step page to a more detailed view of the step animation options for just that Core. This shows additional lanes for arpeggiation type, transpose (so you can define melodic patterns), note duration, stutter speed and pan. You can also add swing and set the direction the step sequencer will run in. Also available from this view is the MIDI drag‑and‑drop feature; activate this, play some notes while the step sequencer does its thing, and you can then drag and drop the resulting MIDI data to a suitable MIDI track for playback by a different instrument or editing. For those determined to get the most of Symphonic AI, this is the heart of the Animated Intelligence; it is very powerful stuff, albeit with a bit of a learning curve.

Each Core has its own sophisticated step animation options.

So just what sort of sound does all this impressive sampling and software technology produce? Well, if the presets reflect what the sound design team think, then ‘hybrid orchestral’ is a pretty decent way to summarise Symphonic AI’s strongest suit. Many of the presets demonstrate the quality of the underlying orchestral sounds but, as often as not, these are either tweaked by the effects and step sequencing options, or layered with some of the more synthetic sources, to shift them beyond what might be considered a traditional, purely orchestral, sound.

That will, of course, suit some musical contexts and not others but, if ‘hybrid orchestral’ is what your latest project needs, then Symphonic AI is a genuinely inspiring resource. It absolutely cuts it in terms of the underlying sounds but what’s particularly engaging is how those sounds almost take on a life of their own when combined with the ‘animated’ elements of the sample engine. Load almost any preset and, once you start playing, it will trigger a new musical idea. That would be a big plus for almost any busy media composer. 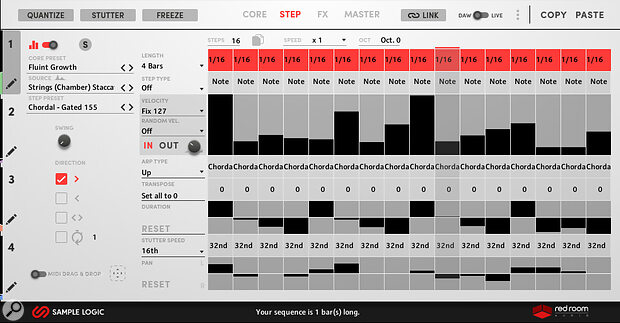 Once you dig in, the animation options are very deep.

With the ‘hybrid’ box well and truly ticked, auditioning the individual Source presets — the raw orchestral sounds upon which the inspiring Core presets are built — stripped of effects and sequencing options, was interesting. As mentioned earlier, there is a substantial set of these Source presets, and they span individual orchestral sections and sub‑sections plus a good selection of ensembles and mixed ensembles. All are sampled for velocity, but each is a single articulation; there are no multi‑articulation, key‑switchable, Source presets.

That said, there is a good range of articulations, options for both chamber and full‑orchestra groups for many instruments, and some great instrument combinations. There are also versions using either close or room microphone placements for many sounds. OK, they might not compete with a top‑end, 100GB+, dedicated orchestral library in terms of flexibility and detail, but they still sound very good and my only minor quibble was that a few of the solo string Source presets had a little too much low end (bow?) rumble for my taste. This was, however, very easily remedied via the Lo Cut control. Providing you are happy to work with a single articulation format (and some composers prefer to do this anyway), Symphonic AI can do traditional orchestral. In that context, I was perhaps a bit surprised Sample Logic didn’t include some additional ‘straight’ orchestral Core presets, stripped of effects, but making use of the animation features. I rolled a few of my own and was impressed with what’s possible. This is, of course, something that could easily be added to Symphonic AI’s (already impressive) Core preset collection in a future update.

If you are a busy media composer and have the budget, Symphonic AI is an absolute powerhouse for hybrid orchestral scoring.

Sample Logic and Red Room Audio have created something very special with Symphonic AI. It’s undoubtedly going to appeal to busy media composers but could also find a home in other music production contexts. Even if you are just happy to fine‑tune presets, there is plenty to keep you interested. However, for those prepared to invest the time and dig a little deeper, there is an endless combination of sound‑design options available. What’s more, the underlying sample base will fully reward that effort. No, it’s not cheap, but Symphonic AI is most certainly impressive.

Given the combination of orchestral sound sources and the step‑based sequencing/animation options, the comparison with Sonuscore’s The Orchestra is an obvious one. The Orchestra has just been updated to v2 and, if you go for the ‘Complete’ edition (which bundles further additional string and horn samples), the products are a similar price. While both provide powerful ‘animated’ performance options and share broad underlying concepts, the details of their operation/UI are somewhat different. However, for media composers prepared to get to grips with the advanced pattern‑based ‘animation’ features found in both products, the creative potential of either is undeniable.

Both products also offer a range of single‑articulation orchestral presets but, while The Orchestra doesn’t provide the synth‑based sound elements found in Symphonic AI, it does include multi‑articulation presets with key switching for all the major orchestral instrument groups. For traditional orchestral scoring, that gives The Orchestra a slight edge, while Symphonic AI takes the prize for hybrid scoring straight out the box.

If you are a busy media composer and have the budget, Symphonic AI is an absolute powerhouse for hybrid orchestral scoring. Top‑notch stuff from Sample Logic and Red Room Audio.