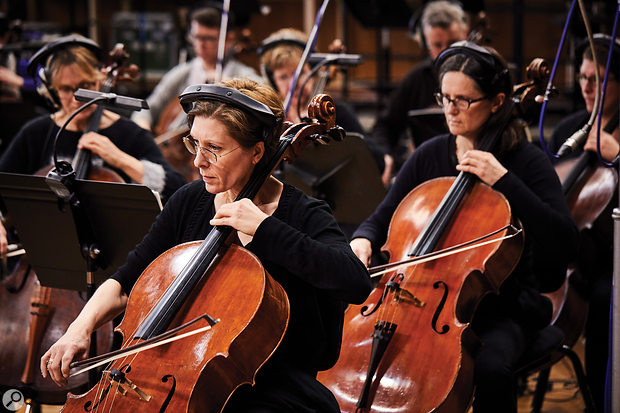 Spitfire Audio join forces with the BBC Symphony Orchestra at the celebrated Maida Vale Studios. Is this the best of British?

Though I'm growing a trifle weary of flag-waving right now, I was pleased to hear that Spitfire Audio, champions of British musicianship and purveyors of fine orchestral samples since 2008, have teamed up with the BBC Symphony Orchestra, purveyors of fine British orchestral music since 1930, to record a new library which we can safely describe as all-British. Henceforth known as BBCSO, the project stemmed from a discussion in a pub (always a good starting point) between Spitfire founders Christian Henson and Paul Thomson, and Dominic Walker, a commercial director at BBC Studios (formerly known as BBC Worldwide).

Paul Thomson explains: "I was working with BBC Studios on a TV show as the composer. I've always had a great relationship with them, and as the project came to an end they asked, 'We love what you guys are doing with Spitfire, is there anything we could collaborate on together?' We brainstormed and that provided the kernel of the idea." From such little acorns, mighty oaks grow. Eighty-four recording sessions and over a million samples later, we now have the mighty BBCSO, a large scale, comprehensive, one-stop orchestral sample library powered by a single cross-platform plug-in for all major PC and Mac DAWs — a breakthrough moment for Spitfire Audio, and a fillip for the historic institution that helped create it.

A significant feature of this ambitious venture is the sheer number of signals it contains: 20 in all, including 11 microphone positions, two stereo mixes, a set of signals optimised for Dolby Atmos mixing, and five spill signals. The latter stemmed from Paul Thomson's desire to have "all of the mics open all of the time", thus replicating what happens when recording an orchestra live. Though it seems daft to fade absentee players' microphones into a mix, the spill from these open mics adds a subtle but telling ambience which enhances the sense of being in the room with players. (See the 'Microphone Positions' box for more details.)

If creating blockbuster scores is your mission in life, this library could be just the tool you need to help you realise it.

The project was recorded in Maida Vale Studios, originally built in 1909 as a skating rink. Rebuilt as a BBC facility in 1934, it has been home to the BBC Symphony Orchestra, BBC Radiophonic Workshop and the legendary John Peel Radio 1 sessions. All instruments in the library were played by members of the aforementioned BBCSO, the Beeb's principal broadcast orchestra, which has performed regularly at Maida Vale since 1934. 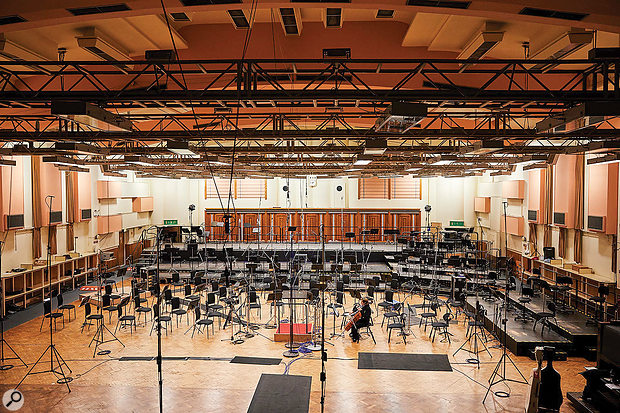 The principal cellist playing in Maida Vale's cavernous Studio One.

Though such longstanding institutions have been known to breed complacency in the workforce, there's a lot to be said for a musical collective that plays together regularly: over time, the ensemble naturally develops a cohesive balance and an uncanny musical telepathy concerning subtleties such as rhythmic feel and dynamics. Having played every instrument and ensemble in this large library, I can assure you none of the players exhibit any signs of complacency — rather, it sounds to me like they gave it their all. The studio acoustic also makes a major contribution, imparting size, depth and a unique combination of warmth and brightness to the orchestra's polished sound.

If you're considering buying BBCSO, it's worth bearing in mind that Spitfire pay performance royalties twice-yearly to every artist who has performed on their recordings. Paul Thomson explains: "As with all of our products, the players receive a royalty on sales, but as this is a partnership with the BBC, a proportion of sales revenue also goes back into supporting music at the BBC." This supportive, co-operative attitude is a welcome contrast to certain big Internet companies who would sooner set fire to their beards than pay musicians a royalty.

For more info on the studio and players, see www.soundonsound.com/music-business/bbc-maida-vale-studios and www.bbc.co.uk/symphonyorchestra.

BBCSO runs exclusively as a plug-in in your DAW — there is no Kontakt (or any other sampler format) version, and samples are locked for editing. Despite Spitfire referring to it as a 'stand-alone plug-in', it needs to run inside a host program such as Logic Pro X, Cubase or Pro Tools, and will not operate in stand-alone mode on your desktop.

The extensive microphone options have made this library a massive 680GB in size, which means that those unable to access fast broadband will probably have to consider buying a physical copy. With that in mind, Spitfire can ship the library either on their standard hard drive or a 1TB Samsung SSD drive, both of which entail extra cost. While the latter option is more expensive, it offers distinct advantages: you can run the library direct from the SSD, which is faster and more reliable than a standard drive and saves you a huge amount of internal hard–drive space. Also, it looks posh and has the makers' logo emblazoned on it, which will impress your friends.

In order that SOS readers could clap eyes on this review at the earliest opportunity, Spitfire sent me an early version of the library on hard drive (the SSD option wasn't available, but will be by the time you read this). I'm told subsequently a number of significant improvements have been made, particularly to the legato patches. I don't have a list of these changes, but I know from experience Spitfire are diligent about such things and will respond quickly when users identify issues. At the time of writing the manual wasn't ready either, so some details mentioned here may differ in the final release version.

The BBCSO plug-in more or less replicates the design of Spitfire's Eric Whitacre Choir, the only obvious difference being that the colour scheme has changed from light grey to black. Minimalism is the order of the day, with small graphic symbols used in preference to text. 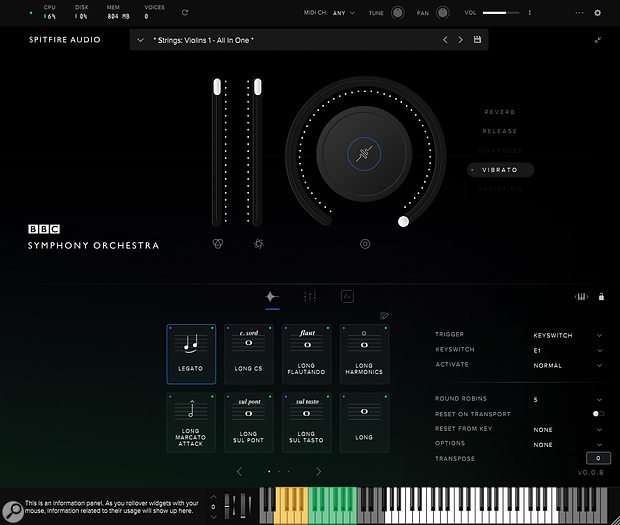 The BBCSO plug-in's main screen. Only eight articulations are visible at one time on the main screen, with others accessible via cursors.

Underneath the main screen's two sliders and large central dial is a set of buttons representing an instrument's available articulations, which you click on to activate — each artic has its own user-customisable keyswitch, so you can change playing style on the fly. Alternatively, you can assign each style its own MIDI channel.

The sliders control MIDI CC 11 (expression) and CC 1 (modulation) — both are mapped to volume, though you can change that by using the standard 'MIDI learn' function. The dial controls the amount of additional reverb, release time, attack tightness, real-life vibrato for instruments that use it, and a performance variation control which allows you to switch between (for example) short and long falls. Other than the reverb, there are no effects: the samples are served up straight with no processing, but since they're so meticulously recorded they don't need EQ or compression to sound good.

Patch names initially appear in one long master list, which you can reduce to a more manageable menu by selecting a particular instrument family, or by viewing only the patches you've awarded a star. The plug-in holds only one instrument at a time, but you can layer multiple techniques within a preset by shift-clicking on the ones you want to hear.

A few parting words about the GUI: I'm not a fan of cryptic symbols being used as a substitute for text, and in this case the problem is compounded by these tiny, faint symbols being placed on a black background, so even when the GUI is scaled to maximum size, you can barely see some of them. I also quickly got tired of hovering my mouse over icons in order to highlight otherwise invisible text. I'm afraid this seems like putting a minimal design ethos over musical functionality — a case of less is less.

In order to measure up to those over-used 'epic' and 'cinematic' epithets, an orchestra needs a large contingent of string players, and this one has it: a full-blown, sod-the-budget, 60-player symphonic string section comprising 16 first violins, 14 second violins, 12 violas, 10 cellos and eight double basses. In addition to the ensemble performances, each section leader was recorded solo.

Jamming with the second violins' legatos, I found myself playing John Williams-esque uplifting movie themes, which I guess vindicates Spitfire's website motto: "We make sounds for film composers." The violas play sumptuous, breathy sul tastos, and if you want to add definition to their parts, the time-honoured trick of layering a marcato attack over the straight long notes works a treat.

For composers like myself who use a lot of sustained chords, the cellos' vibrato long notes are a great, lush-sounding writing tool. The cello legatos are as good as they come, and their spiccatos will add a classy-sounding, driving groove to your ostinatos. Though not usually emotionally affected by double basses, I got goose bumps playing low fifths on their sordino long notes: a great, rich sound, played with wonderful accuracy and poise. Only one gripe: there are no mapped full strings patches — how about it, Spitfire? 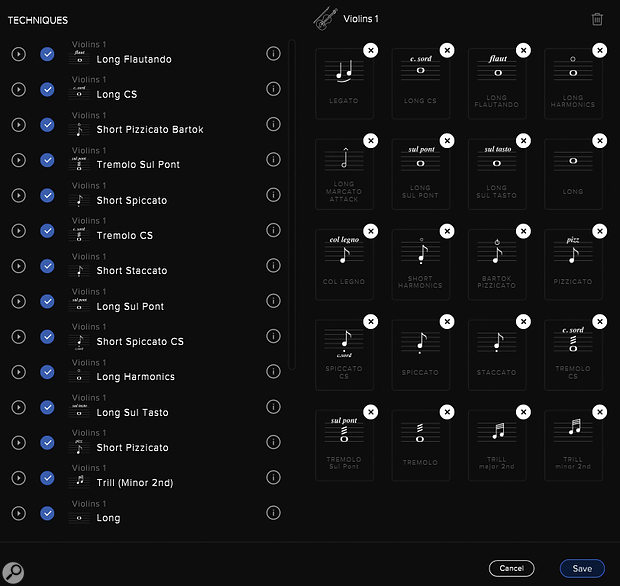 The Techniques window shows all available playing styles for an instrument.

The solo strings demonstrate the superior tone and accomplished playing one would expect from an orchestra of this stature — the first violinist's delayed vibrato works well for slow, expressive legato melodies, while for more lively material I preferred the more immediate vibrato of the second violin. The solo violins' pizzicatos, short notes and col legnos are all great, and I enjoyed the tender organic breathing quality of their flautandos.

If you've never written for solo viola, the lovely dark, mellow timbre of BBCSO's instrument might make you want to give it a try. An ideal source of sombre melody lines, it also plays some great, wheezy, almost lo-fi harmonics which for some reason put me in mind of radio signals from outer space (must be the medication). The solo cello's legatos and muted long notes are brilliant, and its yearning, gently undulating sul tasto performances sound great when played chordally — to which end, I also appreciated the generous C2 to Bb5 playing range.

The words 'solo double bass' don't normally gladden my heart, but this instrument did. It sounds absolutely magnificent from its top note of F#3 right down to its room-shaking low C1, and its stentorian legato and tremolo low notes provide a stupendously solid foundation for BBCSO's solo strings.