It's increasingly common to extend the I/O capability of small computer interfaces by connecting an external eight-channel preamp via an ADAT optical port. Some of these external preamps are just that — a multi-channel preamp and A-D converter, providing additional simultaneous recording inputs to the computer, while others provide D-A conversion and line outputs too, enabling the connection of analogue outboard in send-return loops as well as more monitoring feeds and so forth. Popular ADAT preamp options for this application range from the Behringer ADA8200 Ultragain at the budget end of the scale, through to Cranesong's Spider at the very deep-pocketed end, with alternatives from the likes of ART, Audient, Focusrite, Grace Design, Midas, PreSonus, RME and more besides.

A new addition to this competitive market comes from Tascam, in the form of the Series 8p Dyna. This is a 1U rackmounting eight-channel mic preamp with integrated A-D converter and, as the name implies, a dynamics processor for each channel.

Of the eight channels, the first two preamps are accessed through front-panel combi-XLRs accepting mic, line or instrument inputs. The remaining six inputs are also on combi XLRs, but at the rear of the unit, along with two sets of balanced analogue line outputs on individual quarter-inch TRS sockets and an AES59 (25-pin) D-Sub socket.

The rear panel includes analogue outputs on both D-sub and jack connectors.

Digital outputs are presented on a pair of ADAT light-pipe ports, with both providing all eight channels at base sample rates. For double rates, the S/MUX2 format is employed, so the first port carries channels 1-4 while the second carries 5-8. At quad rates, only the first four input channels are converted, with outputs 1-2 on the first port and 3-4 on the second using S/MUX4. There are no ADAT inputs — this device is intended to provide additional recording channels, so if you want an expander to hook up analogue line-level gear you'll have to look elsewhere. A pair of BNC sockets provides word-clock synchronisation in and out, with rear-panel switching for 75Ω input termination and output source selection (thru/internal).

The Series 8p Dyna is powered from a 12V wall-wart, with clip-on wall socket adapters for different territories. The DC power connection at the back of the rack unit is the usual coaxial connector, and a cable clamp is provided along with a Technical Ground screw-terminal (the wall-wart is a Class-2 double insulated type with no mains safety earth connection, so in installations where the rack unit doesn't get grounded via its chassis the technical ground connection can be employed instead).

As well as protective fast-acting one-knob compression, each channel has a front-panel phantom-power switch.As you'd expect, the front-panel controls are extremely simple, with each channel having just a rotary gain control and a second rotary control, offset below and to the right, to adjust the 'one-knob compressor'. The latter adjusts the compressor's threshold, so turning the control clockwise results in more compression while (and, rather cleverly) turning the knob fully anti-clockwise completely bypasses the dynamics processing circuitry, as confirmed by the THD figures I captured with my Audio Precision analyser. Although these slim-line gain and compression knobs look elegant, I found it quite hard to see where each control was pointing as the only mark is a shallow groove cut into the shiny metal cap.

Channels 3-8 have illuminated (red) buttons to engage phantom power, while the first two channels have three-way slide switches selecting the instrument input mode instead of the normal mic/line input, or mic with phantom power (indicated by an adjacent red LED). There are no input pad, high-pass filtering, or polarity-inversion facilities.

Over to the right of the front panel is a compact array of eight LED short bar-graph meters monitoring the digital output, each with four level bars (-42, -18, -6, and 0 dBFS). These are supplemented with an overload LED, and another LED that illuminates when the compressor is active. Alongside these meters is a grid of seven more LEDs indicating the current sample-rate and clocking status. Changing the sample rate is slightly less obvious than most converters, as a flush-mounted button below the grid has to be held in for a couple of seconds to access the setup mode. When in this condition all seven LEDs light, with the current sample rate blinking. Further presses cycle around the sample rate and external clocking options, while another long press exits the setup mode.

The Tascam Series 8p Dyna sounds clean, quiet and transparent, with plenty of headroom in normal use.

Operating the 8p Dyna is trivially simple, of course. There is some obvious gain-bunching towards the clockwise end of the gain controls, which is very common in this kind of preamp design, but it's not too bad; I've reviewed other preamps that are harder to control.

When processing microphone inputs the available gain range is effectively +10 to +63 dB, but it shifts to -4 to +50 dB for line inputs, or +2 to +55 dB for the instrument inputs. The minimum microphone input level for a nominal +4dBu output is -59dBu, while the absolute maximum input levels (for +20dBu at the analogue output) are +12dBu for the mic input, +20dBu for the instrument input, and +25dBu for the line input. In other words, the 8p Dyna has fairly healthy headroom margins.

Phantom power was only present on the XLR connectors, and measured well within the specified tolerances even when supplying the full IEC spec current. The input impedance measured 2.4kΩ for the mic input, 14kΩ for the line input, and 1MΩ for the instrument input. 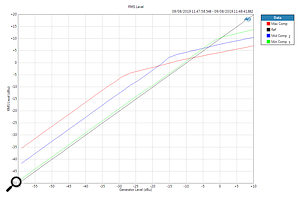 A set of transfer curves showing how the Compression control changes both the threshold and the makeup gain.I measured the mic preamp EIN figure as 126.5dB, which is within 0.5dB of Tascam's specification, and crosstalk measured better than 85dB at 10kHz. THD was 0.008 percent at maximum gain with the compressor bypassed, increasing to between 0.015 and 0.04 percent when the compressor was active, depending on the amount of gain-reduction being applied. I noticed that the mic preamp bandwidth reduced slightly as the gain increased, such that at low gains the -1dB corners measured 7Hz and 70kHz while at maximum gain they reduced to 20Hz and 18kHz (-1dB). It's possible that some will notice this reducing bandwidth as slightly less 'air' when using maximum gain. (I did personally notice the sound becoming a shade darker in this way, but it's nothing that couldn't be easily compensated for, if that's desirable, using a small amount of very high shelf/bell EQ boost).

Checking the A-D converter, I found the overload LEDs in the metering panel were slightly cautious, coming on at -0.6dBFS, and full digital output was obtained with an analogue output of +20dBu, which is about 1dB below analogue clipping. The Series 8p Dyna's A-D converter's AES17 dynamic range measurement came out at 114.3dB (A-wtd), a full 11dB better than the Behringer ADA8200, slightly above the Audient ASP800, but a decibel or two below the ASP880 and Burl's B2. 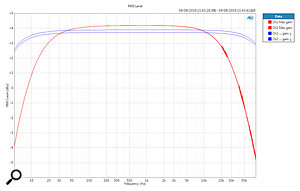 Frequency response plots to compare the operating bandwidth at minimum and maximum gains.The compressor is a very simple and fast-responding design, presumably intended to provide overload protection rather than creative dynamic shaping. The ratio is fixed at 2:1 with a reasonably soft knee, and the attack and release times appeared both to be pretty fast at around 30-40 ms. The rotary control adjusts the compression threshold from 0dBu down to about -30dBu, with make-up gain being introduced automatically with reducing thresholds, up to around +14dB. With the compressor control fully clockwise, an input signal that would normally generate a full +20dBu (0dBFS) output is reduced, instead, to +7.5dBu (-12.5dBFS).

The Tascam Series 8p Dyna sounds clean, quiet and transparent, with plenty of headroom in normal use. With the massive headroom potentially available when using 24-bit A-D converters I don't really see the need for protective limiting/compression these days — so it's a plus that these can be switched off altogether where desired. But for those who do like to keep their recording levels high, the Series 8p Dyna's compressors are very fast acting, particularly in the recovery/release phase, and work well to help avoid overloads on loud transient sources such as drums and percussion. The gain ranges are generous, especially on the two instrument inputs, and while there's a little 'bunching' at the loud end of the gain controls it's not problematic; I didn't have any difficulty setting or matching the desired gains accurately. All in all, then, Tascam have come up with an attractive and affordable alternative to the existing range of eight-channel ADAT-equipped mic preamps.

The Series 8p Dyna most obviously competes with the slightly less expensive Focusrite Scarlett Octopre Dynamic, which also offers ADAT inputs and D-A conversion, but other price-comparable alternatives include the Focusrite Clarett OctoPre and Audient ASP800.

Tascam's Series 8p Dyna provides a useful alternative to expand a computer interface or line-level mixer, and incorporates protective compressors on every channel.