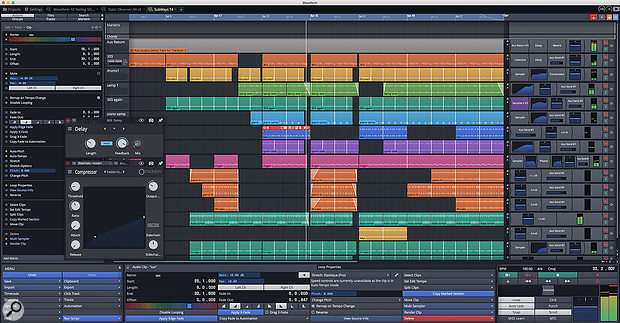 Rebranded Waveform by Tracktion, is this long-established alternative ready to become a mainstream DAW option?

Not everyone gels with one of the mainstream DAWs, and if you are prepared to look beyond the obvious, there are a number of well-established alternatives. One example is Tracktion. Since SOS reviewed version 6 of this cross-platform package — Windows, Mac OS and Linux are supported — in the August 2015 issue, it has continued to evolve, and the program itself is now known as Waveform, with Tracktion the overall brand.

When SOS last looked at Tracktion, it was already a well-specified DAW that offered an excellent range of audio and MIDI recording features, especially given its very modest price tag. It also scored highly for ease of use, with a logical, if unconventional, user interface built around a single-window concept and a left-to-right signal flow that, at the right of the window, culminated in a distinctive mixing environment. For those coming to Tracktion from another DAW environment, the absence of a conventional virtual mixer might have been considered a negative. However, as we will see in a moment, Waveform now offers something for everyone on this front.

Although VST support was included, the Tracktion 6 package lacked a starter collection of virtual instruments or effects plug-ins included, so users starting from scratch had to budget for third-party plug-ins to build a complete music production suite.

So, what's happened between Tracktion 6 and the arrival of Waveform 10? Well, name change aside, quite a bit. Perhaps the most significant change has been the addition of a more conventional Mixer view, giving users a choice of mixing approaches. The MIDI editing options have been improved, a MIDI Chord Player system has been added along with a MIDI Pattern Generator for creating chord performances, bass lines, melodies or arpeggios, and a new Chord Track feature allowing other tracks to follow a master set of chord changes. Perhaps the other highlight has been the introduction of the well-specified Multi-Sampler virtual instrument, which supports the SF2 format and also encourages you to create your own sample-based instruments — though, as yet, Tracktion don't seem to offer additional sound packs for purchase.

All of this functionality has been added along the way to the new Waveform 10 release and this, too, offers plenty of enhancements and new features. I'll focus on these new v10 features in this review, but one other earlier development that's worth noting is the revised pricing structure. Tracktion 6 cost just $60 but, as I've already mentioned, did not ship with much of a collection of plug-ins. Waveform 10's pricing now starts at $119 (with upgrades from $69) for the Basic edition, but there are also Standard ($259) and Extreme ($499) editions. Waveform itself is identical in each edition, and the differences lie in the range of additional plug-ins and virtual instruments that are included. There is also a flexible Custom Bundle option that lets you configure your own selection of additional content.

Waveform Basic includes Waveform itself, a flexible sample/synth-based instrument called Collective, the Subtractive virtual analogue synth, a mastering-oriented multiband compressor/EQ called Master Mix, a pack of loops, the Artisan Collection of 62 bread-and-butter effects plug-ins and bundled versions of Antares' Auto-Tune Access and Celemony's Melodyne Essential. Finally, the Waveform 10.2 update adds the Drum Sampler instrument, of which more later. So the base price is higher than it was with Tracktion 6, but Waveform 10 is now a much more self-contained package, with virtual instruments and effects included even in the Basic edition.

For the purposes of this review, I was supplied with the Waveform Standard Pack, which adds the DAW Essentials Collection of 16 impressive-looking effects plug-ins and the BioTek 2 sample-based workstation synth.

Waveform 10 brings a number of useful interface changes. These include the new Actions Panel. This is accessed as a tab within the Browser section which can be toggled on/off at the leftmost side of the main display. While on the surface this might appear like a direct replacement for the previous Properties panel, it has some additional elements.

The Actions Panel allows you to hide commands that you rarely use to streamline the Waveform interface.In simple terms, the Actions Panel can be thought of as a context-sensitive commands menu. Its contents change depending upon what type of object — track, clip, plug-in and so on — you currently have selected within the edit (project), providing instant access to relevant commands. Perhaps the most interesting feature of this panel is the ability for the user to define which 'actions' (commands) are visible. Just as Paul White requested of software developers in a recent leader column, Waveform lets you hide those commands that you rarely need, helping to streamline the interface. If you also like to create command macros, these can be added to the Actions Panel for easy access. It might not sound like the most glamorous new feature, but will surely help dedicated Waveform users get things done quicker.

Waveform 10 also includes group editing capabilities, allowing you to collect any combination of tracks into a group and then perform a range of editing tasks in sync on the entire group. What's more, you can also define exactly which parameters are grouped, from pretty much everything to a single setting such as volume or mute/solo. Group creation is easy and, once created, a coloured circle appears on the track header of each track within the group. Groups can be named and colour-coded, and the Browser now sports a Groups tab for further group management tasks. 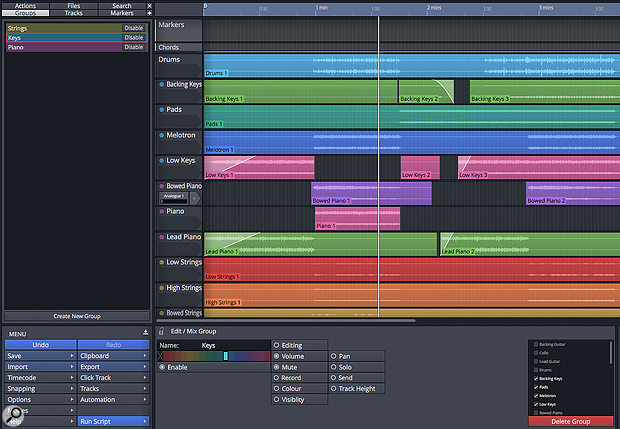 There are, of course, all sorts of applications for group editing. At a simple level, if you have a group of tracks configured for multi-channel drum recording, record-enabling all the tracks becomes a single-click task. At a deeper level, Waveform's track-comping features also work across a group so, if you have multiple takes of something like a multitrack drum recording, you can easily comp between takes and be safe in the knowledge that no weird cross-take performance differences are going to appear. This is powerful stuff, on a par with what's available in the best of the big-brand DAW/sequencers.

Another new feature called Groove Doctor brings audio quantising, groove extraction and tempo mapping to Waveform. The obvious application for this kind of technology is for tightening up drum performances or enhancing them by applying a bit of a groove, but you can, of course, apply audio quantising to any sound source that has obvious transients.

A dedicated Groove Doctor 'stethoscope' icon within the bottom-most toolbar pops open the Groove Doctor panel, which provides a guided series of steps to take you through each of its three possible operations: quantise/apply groove, extract tempo map and extract groove. For example, when quantising, Waveform analyses the selected audio and identifies the positions of transients. The user can control the sensitivity of the transient detection and also manually edit, add or delete transient markers. Once this is done, the audio clip is separated into slices and you can then choose to quantise to the grid or to one of an impressive selection of preset swing grooves. Once quantised, you can smooth the resulting audio using crossfades and consolidate it. 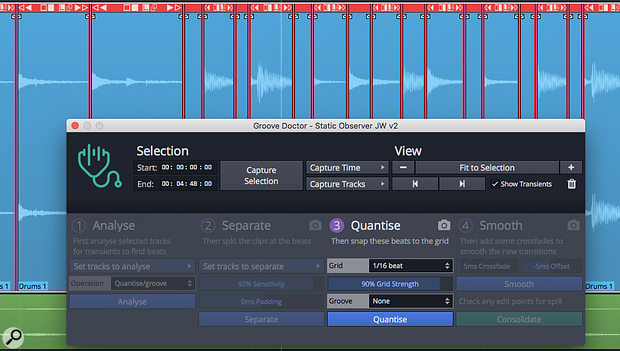 Grooves you have extracted from audio clips can, of course, be applied to further audio or MIDI clips to get everything swinging together. Equally, if you like to record without the constraints of a click track, the Groove Doctor does a pretty good job of extracting tempo data from an audio recording and adding a tempo map to the Tempo track. Your MIDI tracks can then easily follow any natural tempo variation within the original audio recording.

The icing on the Groove Doctor cake is that it works seamlessly with the Group Editing features. You can therefore carry out any of the Groove Doctor operations with a multitracked drum recording, with all the tracks locked in sync so phase issues are avoided.