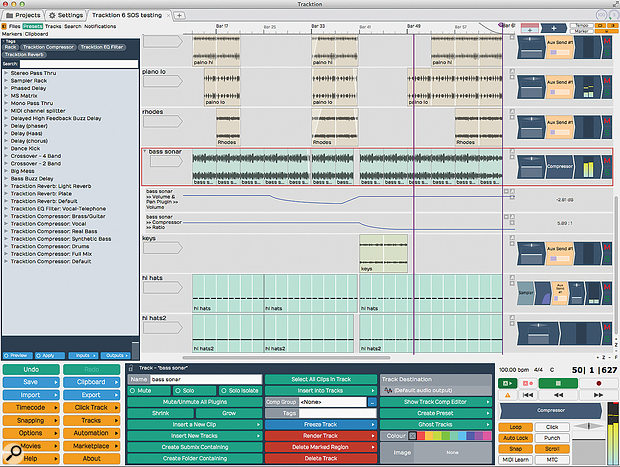 Tracktion’s main Edit screen. Almost every function can be accessed from this single multi–paned view. Note also the availability of automation tracks.

After a number of years in the wilderness, Tracktion is back with its second major update in just over 12 months.

Not everyone can justify the premium price of top–end DAWs such as Cubase, Pro Tools, Digital Performer or Logic, and not everyone needs their comprehensive feature sets, or the complexity that often attends them. If you’re in this position, one obvious alternative is Tracktion. After a rather uncertain ride towards the end of its ownership by Mackie, it’s now back in the hands of a team led by original developer Julian Storer, and appeared renewed when I reviewed version 5 in the May 2014 issue of SOS (www.soundonsound.com/sos/may14/articles/tracktion5.htm).

Now, only a little over a year later, Tracktion 6 is with us, demonstrating a development commitment that will have long–term users (affectionately known as ‘Tracktioners’) very happy indeed. So, whether you are upgrading, cross–grading or simply looking for your first serious sequencer, is Tracktion 6 worthy of your consideration?

I provided a description of Tracktion’s key features when I reviewed version 5 so, brief summary aside, I’ll focus here on the additions introduced in the latest release. In a nutshell, it offers a full audio and MIDI recording, editing and mixing environment, although the last of these is achieved in the absence of a conventional virtual mixer, meaning that if you are coming from almost any other DAW, you’ll need some adjustment to your working methods. While a respectable selection of core effect and processor plug–ins is included, one reason for the very small download size is simply that Tracktion is not bundled with a suite of virtual instruments (although see the ‘Plug The Gap’ box for details of the ‘Plus’ version).

Tracktion’s key selling points include, first and foremost, ease of use: the whole system is built around a single, multi–pane Edit screen, with an unusual, but very logical, ‘left–to–right’ signal flow for tracks within your project. It also has the ability to run on almost any hardware; OS X, Windows and Linux are all supported, and the program goes out of its way to squeeze the maximum amount of mix out of a modest hardware specification. Other benefits include low cost and small footprint, with the full download weighing in at only 15MB. A comprehensive user manual is also still notable by its absence, although in fairness to Tracktion Software Corporation, the web site does include a pretty good suite of tutorial videos for new users.

Two of the most interesting new features in v6 relate to time–based manipulation of audio. First, you can now apply ‘pitch fades’ at the beginning and end of audio clips, allowing you to create some neat (if, ultimately, rather clichéd) speed–up/slow–down DJ effects. These fades are added in exactly the same way as volume fades, after which you simply right–click on the fade handle, and a pop–up menu allows you to switch the fade type from volume up/down to speed up/down. As with volume fades, you can change the duration and shape of the fade.

Of much greater significance is the new Warp Time feature. If you have used audio warping features in other DAWs, Tracktion’s take on the idea will be pretty familiar. Within the Properties panel for an audio clip there is now an option to enable Warp Time for that clip. You can then add multiple Warp Points to the clip; once you’ve done so, moving any Warp Point will stretch or compress the audio on either side of that Warp Point as far as the clip start/end or the next Warp Point.

You can engage Warp Time for a selected audio clip within the Properties panel and then add and edit Warp Points. The grey anchors are all Warp Points, and the purple anchor is the currently selected Warp Point.

The obvious application for this is to adjust the timing of drum loops and other rhythmic material, and Warp Points do indeed allow you to easily tighten up the timing of a drum performance so that you can get key drum hits to lie precisely on the bar/beat grid, should you so wish. Usefully, Warp Points can either snap to your quantise setting or be positioned freehand. And while the process works very well indeed with drums, it can just as easily be applied to vocals, guitars or other instruments if you feel the need to tighten up the timing of an otherwise well–performed part. Incidentally, these time-warping features are all delivered using Z–Plane’s Elastique Pro time–stretch algorithm, which is also licensed by many audio software developers including Steinberg and Uberschall.

Tracktion’s Step Clips, which used to be called Step Sequencer Clips, provide rather neat mini–step–sequencer objects that are great for drum programming — although you do, of course, need a suitable drum virtual instrument in order to make good use of them. By default, you get a 16–step, eight–part grid that’s pre–labelled with some drum types. Programming is very easy and you also get a velocity lane that allows you to set velocity on a step–by–step basis for each of the eight drum sounds. You can also use this lane to set the note length (gate time) for each step: you simply click and drag on the right edge of the velocity bar and squeeze it to the left. The clips are also very easy to loop, copy and modify to add variation. 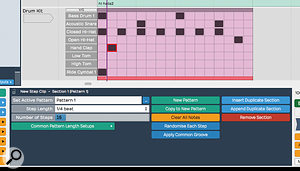 There are a number of ways in which the Step Clip features have been tweaked in version 6, and perhaps the two most significant new features are the ability to send different lanes of a Step Clip to different virtual instruments, and the option to apply groove-quantising to them. For the latter, you can access the Apply Common Groove option within the Properties panel. This opens up a well–populated list of presets to choose from. You can also access a Groove Template Editor and tweak away to create your own custom grooves if you wish.

A further welcome addition is a side–chain input for Tracktion’s compressor plug–in. This does require a little bit of configuring, as you have to first create a Rack object on the track that you wish to apply the compression to, add an instance of the Compressor plug–in to that rack, and then configure the side–chain input to take its source from the track you want to use as the trigger. Once this is done, the Rack object also appears within the trigger track’s section of the Filter pane, at the right of the main Edit tab. 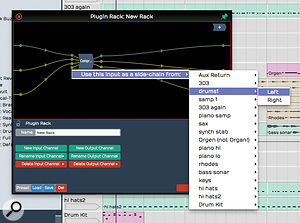 While the setup process feels a little unconventional compared to a more traditional ‘DAW with a mixer’, the end result is the same. You can, therefore, perform all the usual side–chain compressor tasks such as ducking a bed track underneath a voiceover, or keeping a bass guitar out of the way of a kick drum.

Closer To The Edit

Version 5 introduced an editing feature to help with the common task of compiling a ‘best take’ from multiple takes of a performance such as a vocal, lead guitar or drum part. This worked well provided you had recorded your original audio in loop–record mode; in Tracktion 6, although the comping process itself remains essentially the same, you can now add any selection of audio tracks to a Comp Group, regardless of whether they were recorded in loop mode or not. This is obviously much more flexible and means that what is, in fact, a very powerful set of comping tools can now be more easily exploited. 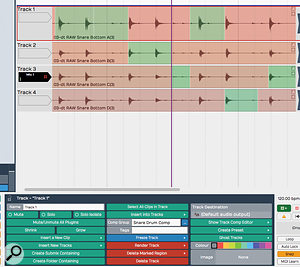 Any tracks can now be added to a Comp Group and used with Tracktion’s rather neat comp–editing tools.

Amongst a range of other new features and changes, a couple are particularly worthy of mention. First, providing you have the necessary hardware I/O ports, Tracktion’s new Insert plug–in provides a means of sending audio out of your DAW, off to some external hardware (for example, an effects processor) and then feeding the processed signal back into Tracktion. This does, of course, involve a two–way trip through your audio hardware and whatever latency that might add. You can, however, apply a Time Adjust value to compensate for this, and there is even an Auto–Detect process where Tracktion will attempt to apply a suitable adjustment.

The new Insert plug–in allows you to use any spare hardware audio I/O to patch in external hardware processors.

Finally, if you like to be able to easily search your media files and presets, Tracktion’s features for tagging and for searching tagged objects have been enhanced. Almost anything and everything can be tagged, which is genuinely useful if you have created plug–in presets that you like to recall on a regular basis.

On The Right Track

The fundamental ethos of Tracktion has not changed in version 6, and in use, with the exception of the improved comping and time–stretching, the new features perhaps make for an incremental improvement rather than a revolution. That’s not necessarily a bad thing, however, and I’m sure existing Tracktioners will be more than happy to experience ‘the same but better’ when upgrading.

Unless you are already in a state of discontent with your current DAW, I’m less convinced that Tracktion 6 will have committed Cubase or Logic or Pro Tools users wondering if the grass is greener. However, for other potential users, as with Tracktion 5, if you’re working on a budget, or on limited hardware (on which Tracktion does a very good job), then Tracktion 6 has obvious appeal. Yes, you need to also budget for some additional virtual instruments, and the software really does deserve a full and proper set of PDF documentation, but these issues aside, Tracktion 6 will allow you to make very sophisticated audio and MIDI recordings.

Tracktion 6 is perhaps more about evolution rather than revolution, then — but it does seem to be evolving in a very positive direction and at a very healthy pace. The things that are not broken have not been fixed and the development team have simply built on what is already a solid foundation, bring their take on a number of advanced features found in many top–end (and much more expensive) DAWs. It’s impossible to deny that it represents excellent value for money. Tracktion certainly isn’t a ‘me too!’ type of DAW but, if budget and hardware resources are tight, it most certainly is a worthy contender. 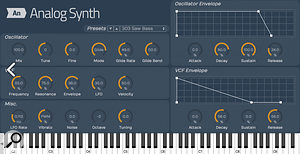 The Tracktion 6 ‘Plus’ version adds some extra plug–ins including a couple of virtual synths.

Tracktion 6 is also available in a ‘Plus’ version priced at $100, which includes two add–ons not found in the basic version: the Master Mixstereo mastering plug–in, which usually costs $59.99, and the Micro Synth Pack. This comprises two plug–in instruments called FM Synth and Analog Synth, and usually retails for $39.99. The latter obviously goes some way to filling the virtual instrument gap, although there is of course a huge choice of third–party VST Instruments available, including many good freeware examples.

Tracktion 6 is a very capable, if unconventional, DAW which offers good value and solid performance even on more limited hardware.