The majestic timbre of the BBC orchestra's four horns would make a fitting musical accompaniment to one of those noble, idealistic 'age of discovery' scenes that occur early in Hollywood sci-fi movies, before everything goes pear-shaped and the monsters start running amok. The horns' controlled, well-tuned performances feature excellent sfz and marcato styles (the latter of which has a broader attack) and a blasting cuivre delivery which Moses would have appreciated when delivering the Ten Commandments. For a more subtle approach, the warm sound of the solo horn is very effective for quiet three-note chords.

The FX window shows the available parameters which are controlled by the dial. Release only applies to long-note patches.

A well-played solo trumpet also contributes magnificent cuivre performances and tone trills, which work well for startling newsflash-style interjections. The trumpet section performs nice smooth, tuneful legatos, and some great 'multitongue' deliveries in a choice of double, triple and quadruple repeated notes (which you can switch between using the 'variation' control), ideal for galloping chase music. If action scenes are your bag, you can use the brass' velocity-driven staccatissimos as an alternative to strings.

Another treat are the tuba player's beautifully rounded long notes, a masterclass in maintaining a consistent attack across the entire range — a pleasure to play, and a fabulous big, warm, low-register timbre to support the BBCSO brass section. A solo contrabass tuba descending to bottom C also plumbs the bass depths with its low pedal notes, but can also do you an elegant, mournful-sounding legato melody.

The horns and most of the brass instruments play flutter-tongue performances. I've never heard this style used in any of the epic trailer music that pervades the Internet, so I assume it's included as a nod to the avant–garde fraternity. While I've always found it amusing (not to mention a convenient excuse to throw in a flatulence joke), I'd rather have horn and trumpet rips and falls, which are both missing from this library.

Moving on to the woodwinds, I loved the piccolo. It's impeccably performed with nary a squeak nor split note in evidence; even the notoriously difficult top register is as clean as a whistle. Highlights include an excellent set of rips and falls played in long and short lengths (piccolo rips are a classic orchestral device — read about them at www.soundonsound.com/techniques/sampled-orchestra-part9). On a less frightening note, the rips have a comedic quality which would work well in cartoon music.

The solo flute's legato is a joy. Its straight notes sound plain and folksy, but when you add vibrato it bursts into lyrical life, a lovely expressive sound for top lines. As mentioned, this is real played vibrato, not a mod-wheel synthetic wobble. A pity there's no alto flute or bass flute, but the flute family basics are all there and sounding fabulous.

If you're in the market for poignant, expressive lead lines, this library's solo oboe has a very usable legato. Its large relative, the cor anglais, also has an attractive, somewhat more reflective tone, but its legatos need a bit of work — the vibrato samples' E5 has a wobbly moment and some of the non-vibrato notes sound like their loops kick in too soon. 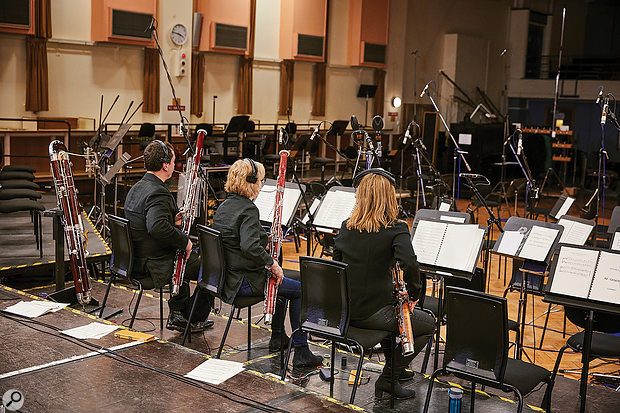 The bassoon section doing what they do best in front of an impressive array of microphones.

Always a personal favourite, the bassoon handles its archetypal rhythmic and melodic duties with aplomb. Though it has a nice line in solemn legato melodies, the contrabassoon seemed a little lacking in rasp at the low end — that was until I layered its flutter-tongue samples over the sustains, at which point the instrument's gargantuan bottom note started dislodging plaster from my music room ceiling.

The sub-bass mayhem continues with a terrific contrabass clarinet, which manages to play sinister, oily, lugubrious tunes in its high register as well as blasting out window-shattering Close Encounters-style low bass trumps. A set of fruity flutter tongues from the bass clarinet also raised a smile, but the star turn here is BBCSO's regular clarinet, a fine-toned instrument played with admirable control. Again, the legatos need a little work, which I'm hoping will have been done in the release version.

I was pleased to see the historic Miroslav Vitou format of three flutes, three oboes and three clarinets preserved in this library and sounding better than ever. Maintaining the orchestral tradition, clarinets are performed with no vibrato, which arguably limits their use in non-orchestral music styles.

The BBCSO timpani sound just the way I like them: resonant, boomy and explosive at loud dynamics. Straight and damped hits and rolls are played in a choice of hard and soft mallets, while hotrods create a thinner 'thwacky' attack. Though the banging hard hits are the obvious choice for epic arrangements, I liked the ominous sound of the softer mallets. Rolls are looped, and you can create realistic crescendo rolls simply by pushing up the mod wheel.

The beautifully soft-toned harp has the potential to be one of the library's stand-out instruments, but its musical effectiveness is compromised by obtrusive and pointless release samples, and by the lack of a release control. As well as straight notes, the harpist performs ascending glissandi in a selection of scales which you can access with the 'variation' control, but unfortunately no harmonics.

BBC Maida Vale Studios was where I first encountered a celeste, and it was love at first sight. I found the celeste in this collection to be almost unplayable, as it's presented in an unfortunate choice of endlessly ringing or dead damped notes. The vibraphone's rolls suffer from the same endless sustain problem, but happily the five-octave marimba and intensely bright xylophone suffer no such problems and sound delightful. The ecclesiastical-sounding tubular bells are also top-notch, while the glockenspiel and crotales (small tuned cymbals) are absolutely perfect.

Spitfire combine their unpitched percussion in an 'All In One' preset, but rather than lumping everything into a single mega-patch, instruments are presented in 13 keyswitchable patches, each containing between four and 12 samples. The orchestral staples — bass drums, snare drums, piatti cymbals, tam tam — all sound great, and there are some nice mallet cymbal crescendo rolls, a doomy 'off-with-his-head' tenor drum and some ace wood blocks. Oh, and a triangle. If that had been left out, everyone would want their money back.

To my ears, the timpani, drums and piatti sound most effective with the Tree and room mics. In comparison, the close-miking sounds over-dry and lacking in power.

More is to come: citing as an inspirational mission statement the Reithian founding values of the BBC ("to inform, educate and entertain" — and what could be more educational than Strictly Come Dancing?), Spitfire Audio are planning an ongoing collaboration with the Beeb which (they say) "will provide resources for a community of musicians ready to produce the orchestral music and blockbuster scores of the future".

Perhaps they mean you, dear reader. If creating blockbuster scores is your mission in life, this library could be the tool you need to help you realise it. Only one problem with that: it's expensive, but if Spitfire want to make it more accessible to beginners, a scaled-down, budget version with limited mic positions might be one way to go (just a thought from your humble scribe).

In the meantime, this hard-working British company have achieved their dream of giving users a colossal set of eminently playable, multi-miked orchestral strings, brass, woodwind and percussion ensembles and solo instruments performing a comprehensive set of playing styles in one spiffing package — and done it in style.

Beyond these minimums, the company recommend a 2.8GHz i7 (six-core) processor (AMD R7 2700 for PCs) and 16GB of RAM. I would add that to get the best results from this library, you really need an SSD drive.

The signal mixer displays six microphone positions at one time, with 14 others available via cursors positioned underneath. Note the combined control on the right, which can be used to reduce the stereo width of a signal down to mono, and/or pan it to your desired position within the overall stereo image.

Always keen to present their samples in as many listening perspectives as possible, the producers seem to be going for the world record in this library. Here's the complete list:

In addition, there's a full mix and an alternative mix by long-time Spitfire collaborator Jake Jackson, bringing the total signal count up to 20. Six mic positions are shown on screen at one time, with the others available via cursors: any signal can be sent out of any output.

As ever, the Decca Tree is the default miking that loads with every patch: situated above the conductor's head, this trio of mics gives a good representation of the overall room sound, which can be used as a basis for adding other signals. The outriggers feature a similar amount of room, but with added width. Spitfire recommend using the two together for a good composite sound.

For more intimate, detailed solo instrument work I'd recommend the close position, a blend of closely placed mics which works well with the flute and violin. If you want to go in the other direction, the ambient mics (described by Spitfire as 'up in the gods') carry the most amount of room, and could be placed in the rear speakers of a 5.1 surround mix to good effect.

Two titans of British musicianship team up to produce an epic orchestral library. Recorded at the historic BBC Maida Vale Studios, Spitfire Audio's BBC Symphony Orchestra features 99 players and a full complement of sections and solo instruments. All the important playing styles are covered, and the samples are imbued with the classic Maida Vale room sound recorded from 18 microphone perspectives, with two additional mixes thrown in. No runs or phrases are included: this is a play-it-yourself collection which experienced composers will relish for its great sound, excellent performances and large, consistent articulation menu.