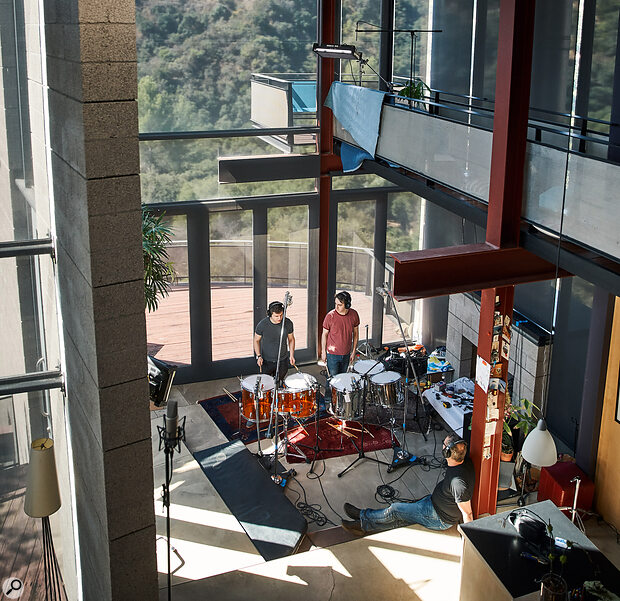 The all‑original recordings for the Hammers library were made in Charlie Clouser’s own 'brutalist' space with concrete, glass and steel surfaces covering the 23‑foot‑high room.

When it comes to drum‑based sample libraries, music creators are not short of choice, whether that’s in terms of style (drum kit, drum synth, orchestral or stylised), breadth of coverage (broad or niche) and cost (pocket‑money‑priced to Hollywood blockbuster budget). New libraries therefore need to provide something a bit special if they are going to stand out from an extensive crowd.

And, when it comes to delivering ‘special’, Spitfire Audio have built a strong reputation. Their latest drum library — Hammers — has been developed in collaboration with Charlie Clouser, whose credits include a decade‑long stint within Nine Inch Nails and composing for the Saw horror film franchise. That’s a background that is full of hard‑edged industrial rock, experimental sound design and, of course, bombastic use of drums. Unsurprisingly, Hammers draws on all of that and Spitfire’s tagline for the library is ‘brutalist drums for maximum impact’. Hold on to your hats; this might get loud.

If you are going to make big sounds, you need suitably big tools. As described more fully below, Hammers ticks that box in a number of ways but the first statistic worth noting is that the library is 100GB in size. Download times aside (for an extra cost, the library can be supplied on a hard drive), this does imply a lot of samples (nearly 120,000 in total) and suggest that a reasonably well‑specified host computer would be a good idea. That said, my ageing iMac coped OK, and I happily ran four instances of Hammers within a moderately busy project for testing purposes. However, with many of the presets clocking in at well over 2GB, a fast SSD and plenty of RAM would certainly be an advantage.

The list of sampled instruments and performance options is also impressively big. Eight core instrument groups are represented; bass drums, surdos, toms, Roto‑toms, darbukas, frame drums, scrap metals and snares. The content is presented in three forms of presets; playable individual hits based around ensembles of specific drums (there is also an ‘ensemble ensemble’ preset with a selection of hits from each drum type), loops for each drum type and warped (sound‑designed) loops for each drum type. 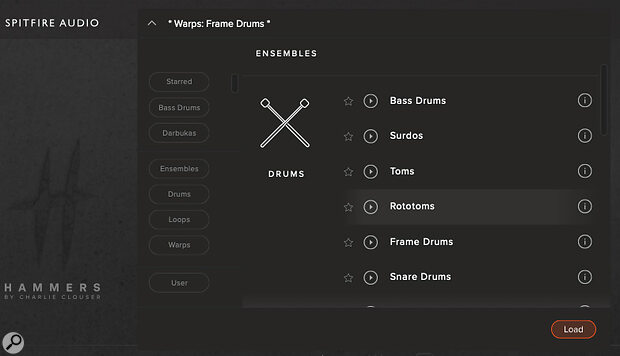 Hammers’ presets include ensembles for individual types as well as some excellent loop‑based content.

For the hit presets, for each of several drums of that type (for example, three different bass drums or four different surdos), you get a selection of techniques including individual hits, flams, ruffs and rolls and, depending upon the drum type, some combination of solo (one drum) damped, solo open, two‑player hits and four‑player hits. Where appropriate, some brushed hits are provided and there are also centre, edge and rim hits for some drums. As Charlie Clouser is a fan of DIY percussion, the scrap metals group includes sounds from pipes, iron and miscellaneous other metal objects to provide some sonic contrast to the drums themselves.

For both the standard and warped loops, the content is organised on a tempo range basis, with groups of eight loops for each drum recorded at 70, 90, 110, 130 and 150 bpm. In each case, these are sets of performance loops composed specifically to suit that tempo range but, of course, Hammers will tempo‑sync any of the loop content to your host. The loops themselves are based around eight‑bar phrases, offer control over the dynamics, and can be stacked with each other to build variations or greater intensity into your overall performance. Across the MIDI keyboard, each loop is mapped across a ‘brick’ of six keys. The first key triggers the whole loop, the next four each trigger a different 2‑bar section of the loop, and the last key an ‘end’ hit. A set of reversed end hits are also mapped starting at C0 for easy riser/transition creation.

I’ll say more about the sounds themselves later, but Spitfire use the term ‘brutal’ in Hammers’ documentation on several occasions. ‘Brutalist’ is an architectural term used to describe buildings with unusual shapes, rough, unfinished surfaces, lots of straight lines and small windows. The all‑original recordings for the library were made in Charlie Clouser’s own such space with concrete, glass and steel surfaces covering the 23‑foot‑high room, the same space he used to create the signature sound of the Saw soundtracks. That means a fast attack, a relatively short decay time (useful for faster sequences) and, at the highest dynamics levels, a big and suitably brutal sound.

As well as up to nine round robins for each hit, multiple microphone placements were recorded within this ‘brutal’ space to provide plenty of ambience options. These included close, overhead and room, and additional versions of these with some processing and pitch‑shifting applied, including ‘crushed’ versions with more extreme sound design applied.

In terms of the underlying content, therefore, there is a lot on offer. Yes, it’s undoubtedly ‘niche’ content — drums designed with horror, action, drama and trailers very much in mind — but there is a lot of time, thought, effort and musical skill that’s gone into the construction and curation of the sample content. Hammers is a big beast of a drum library.

This impressive array of tools obviously needs a good home and Spitfire have delivered Hammers in its own custom plug‑in front‑end. As shown in the various screenshots, the interface is divided into four main zones; an upper control bar with, amongst some other settings, access to the preset browser, a top panel with three global controls, a lower panel with three tabs to access the Techniques, Signal Mixer and FX sub‑panels, and a lower keyboard strip that’s colour‑coded to guide the user with the MIDI mapping of the currently loaded preset. 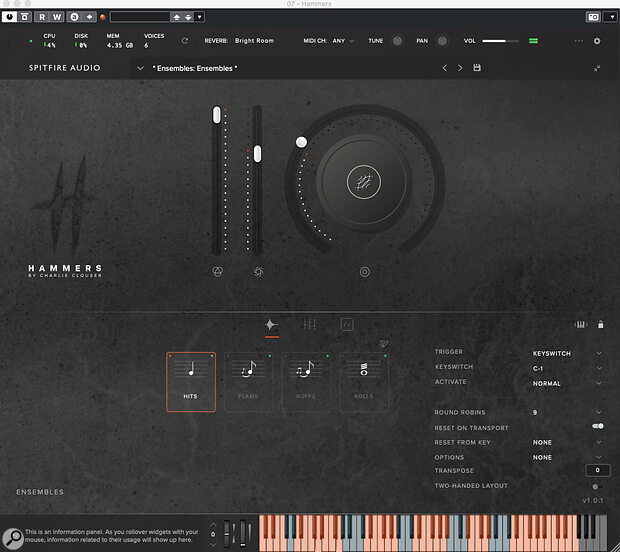 The minimalist upper panel’s three sliders control global volume, dynamics (particularly useful for controlling dynamics in the rolls and loops and, by default, linked to the Mod Wheel) and (also by default) the global reverb level. You can select between 13 different reverb types within the top‑most toolbar. These are very much in keeping with the tone of the library and sound very good indeed. Used with the close‑miked drum sounds, you can span a good range of ambience levels and types before you even venture into the other microphone options provided. Sensibly, however, the reverb decay times are kept relatively short to stop your busier performances from ending up as a mush of reverb tails. If you click on the central icon of this large circular slider, a pop‑up selection list appears, and you can bind the control with one of the other sound‑shaping options found on the FX panel. 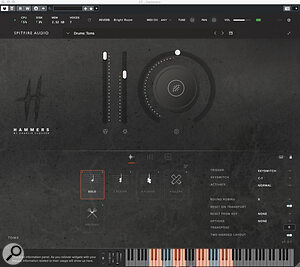 As shown here for the Toms ensemble preset, all the sounds feature a selection of performance techniques.For the hit presets, the Techniques panel shows the different performance options offered for the currently loaded drum. You can use the on‑screen buttons to switch between these or, as shown on the far‑right of the panel, via keyswitches (starting at C‑1 on the MIDI note range). The MIDI mapping displayed on the lower mini‑keyboard graphic may change to reflect the different techniques options but, usefully, there is a lot of consistency in the mapping design for the majority of the presets making it easy to master the layout of the various instruments. In addition, by default, you also get a ‘two‑handed’ arrangement, with the same samples mapped across two key ranges for ease of playing. The small ‘pencil’ icon opens the Techniques Edit screen and you can add or remove techniques to the current preset if you need to customise things further.

The Signal Mixer allows you to select, and mix between, any of the various microphone options. This includes three pre‑mixed options — Mix 1, Mix 2 and Mix 3 — blended by Charlie himself and going from big, to bigger, to biggest. For the other microphone options, you can create your own blends and, surprisingly, each additional mic added only seems to add a very modest extra RAM overhead. Things are somewhat different for the Warped Loop presets as the different mics are replaced by 12 different warp presets with each applying different sound design to the underlying loops. You can mix and match between these and, of course, automate the level of any of the sliders (right‑click to use the built‑in MIDI Learn feature) for real‑time variations. Incidentally, you can turn off the default ‘Advanced’ mode for the Signal Mixer panel and all the mic options are folded down into a simple Close‑Far slider to control the level of room ambience delivered from the original mic‑based recordings.

Hammers includes sound‑designed elements built into the sample base but the FX panel offers a streamlined selection of further options.

The FX sub‑panel is a fairly minimalist affair with five circular sliders controlling the level of Reverb, Low‑pass Filter, Reverse, Compress and Normalise. The LPF is simple but very effective, while the Compress option simply controls the amount of master bus compression. As an alternative to the compression, Normalise increases the volume of quieter samples to reduce the overall dynamic range of a performance, so you get the tonal variation from soft to loud but the softer hits don’t disappear quite so easily within a busy mix. Before you can use the reverse function, you have to enable it on a per‑preset basis via the Preset settings menu (the three dots icon toward the right end of the Toolbar) but, whether with single hits or the loops, it can create a whole lot of additional fun, whether for short riser sounds or adding even extra ‘weird’ to some of the warped loops.