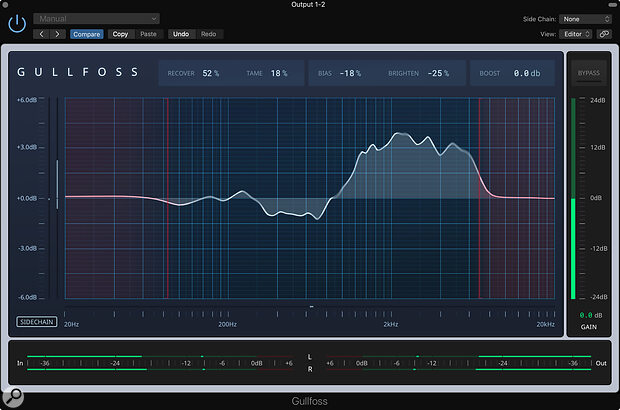 As well as upgrades to its fundamental algorithms, Gullfoss now includes both low‑latency Live and high‑resolution Mastering editions.

Soundtheory’s Gullfoss ‘unmasking’ plug‑in has been through a number of iterations and updates since our original review in 2018 and is now at version 1.10. There’s been a series of fixes and improvements with each point increment, including the important addition of Windows compatibility to the original Mac‑only release. Version 1.9, however, added a side‑chain input and Gullfoss Live, a low‑latency edition optimised for live sound or tracking applications, and now another free update to all existing users brings us to version 1.10, with a more precise auditory perception model, new equaliser engine, and also Gullfoss Master which, whilst it still exhibits only the same 21ms latency as the standard Gullfoss, uses a bit more CPU power to offer even better audio quality and a lower noise floor, aimed at mastering applications. Gullfoss is available in VST2, VST3, AAX, and AU formats.

From Subtle To Transformative

Gullfoss is one of the most intriguing and useful plug‑ins I’ve ever come across, and there seems to be no end to the number of situations in which it can make audible improvements, from the very subtle to the truly transformative, with no drawbacks or side‑effects at all that I’ve ever experienced. Gullfoss uses a very sophisticated model of human auditory perception and bases all its operation on the information present in the input signal, which enables it to carry out some quite radical processing without losing the basic tonality or dynamics of the source signal.

If you’ve not taken a look at it before, all the action takes place in a single screen, looking a bit like the spectrum display of a plug‑in EQ, albeit with very few controls. The simple user‑interface, however, belies what is going on under‑the‑hood. The Gullfoss process primarily seeks to address the issue of frequency masking, basing its calculations on a deep investigation into the ways in which we actually perceive sound. The two main operational controls of what is fundamentally a high‑resolution, dynamic EQ are Recover and Tame. Increasing the Recover parameter causes Gullfoss to seek out and emphasise elements in the spectrum that are at risk of being compromised by neighbouring frequencies, whilst Tame deals with the same situation in reverse by de‑emphasising dominant elements. Of course, there’s a bit more to it than that, otherwise advancing both Recover and Tame by the same amount should result in no change at all, and that’s very much not the case. The general audible effect of Recover is to enhance detail in the sound, whilst employing more of the Tame process will usually result in a smoother, subjectively clearer sound, but you can certainly use both at the same time to good effect. Gullfoss provides a Bias control that determines how the audible frequency range will be divided into elements to be recovered and those that need to be tamed by allocating more spectrum space to Recover (positive Bias), or more to Tame (negative Bias setting). As expected, therefore, the Bias setting will still have a significant effect on the outcome even if you are using just Recover or Tame alone.

However much Taming and/or Recovering you are doing, the output level remains subjectively matched to the input level, with the dynamics unchanged, so you can use Gullfoss alongside any dynamics processing you might normally use without having to worry about them fighting each other. Reducing masking and exposing detail will of course result in an output that actually sounds more dynamic, with better‑preserved transients, but also sometimes brighter, too. Gullfoss includes a Brighten control, which goes both positive and negative, to restore or enhance overall tonal balance. Logically, Bias and Brighten only have an effect when Recover or Tame are not at zero. The last of the primary controls is Boost, which is a dynamic ‘loudness’ effect, mirroring the way in which human hearing perceives the spectral balance to change at different listening levels. Because the effect is dynamic, as opposed to applying a fixed EQ curve, tonal balance changes only occur in things that would sound bigger when louder: mainly lifting the bottom end while dipping the midrange.

You don’t have to treat the whole spectrum: there are high‑ and low‑frequency markers that can be used to define a specific band of frequencies to be processed. If you cross the markers over, you can have an ‘exclusion zone’ that will be left alone while everything outside it is processed. A dynamic EQ graphic is displayed whenever the parameter settings are causing some processing to happen, which actually gives you a fairly good sense of what is going on, in conjunction with dedicated metering for the Recover, Tame and Bias operations, as well as input and output level. The Bypass button is latency‑ and level‑matched, facilitating easier and more valid comparison between the processed and original signals.

Whatever you are doing with it, the result always seems to sound natural and not like something that has been heavily processed. It really is quite a technical achievement.

Use It Your Way

There are, of course, many different ways in which you can deploy Gullfoss. When I first started working with it, I would always apply it to the mix bus in full‑spectrum mode, like a mastering processor, and was somewhat dismayed to find that it could often improve on my best mixing efforts! Often, but not always, and I think that is a key point to understand about its operation. Gullfoss un‑masks and perhaps pushes you towards an optimum tonal balance, but it can’t make creative mix decisions for you. If you’ve deliberately put two similar sounds together to create a ‘soupy’ composite effect, you might find that Gullfoss is trying to unpick the combination for you, depending on your settings.

In multitrack work, I now tend to use Gullfoss more selectively, on individual sources or submixes, and will often try an extreme Recover or Tame that I wouldn’t use on a full mix, just to see what happens. Even if I think I know what I want it to do, there’s many a pleasant surprise to be had with speculative experimentation with Gullfoss. I’ll still always do a sort of reality check with a temporary instance on the mix bus, as anything too radical happening in the display probably points towards an area in need of attention at source. Clicking and dragging in the spectrum display reveals a popup showing frequency and gain at the pointer position, which can assist you in understanding what kind of issues Gullfoss might be trying to address. The frequency‑band limiters are often the key to working with individual sources: using Tame just in the sibilance band turns Gullfoss into a brilliant de‑esser, and plenty of Recover just from 4kHz and up can bring out detail and clarity in a vocal or speech recording without it sounding unnaturally HF‑boosted. Soundtheory’s website has an excellent selection of demo videos in a variety of applications, including a particularly good one on using Gullfoss to improve a compromised, live two‑track recording. One of the best aspects of Gullfoss, I’ve found, is that, whatever you are doing with it, the result always seems to sound natural and not like something that has been heavily processed. It really is quite a technical achievement to be able to rapidly modulate multiple instances of high‑resolution EQ without audible smearing or distortion.

I’ve never actually felt the need to delve into the settings on the Info page in search of even greater audio quality, but Gullfoss will allow you to go beyond its Normal setting to Better and then Best, with the latter imposing about four times the load on CPU performance. You can also change window size and refresh rate while you are in there if you feel the need for more detailed visual feedback, with a further corresponding hit on the processor load. 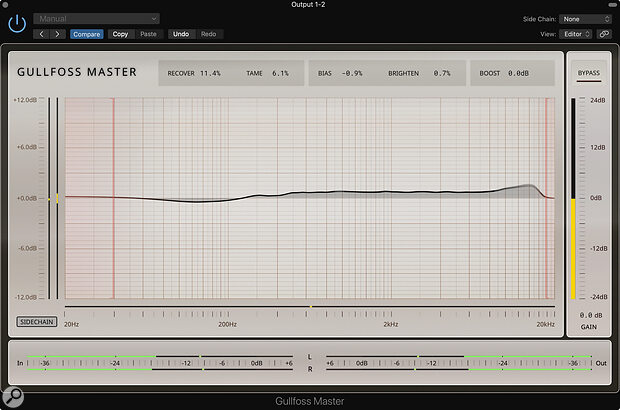 Gullfoss Master, included with the 1.10 release, offers a route to even higher audio quality, with a lower noise floor. This is intended for mixed‑program mastering applications, where the correspondingly greater processor load wouldn’t matter as much as it would with the potential multiple instances used in a multitrack mix. As the auditory model is slightly different, it is not recommended to apply the same parameter settings as you might have used in the other editions, and Gullfoss Master is also already operating at maximum quality, so there are no other quality options. Unsurprisingly, the degree of perceived quality gain is somewhat dependent on the source material and monitoring setup. 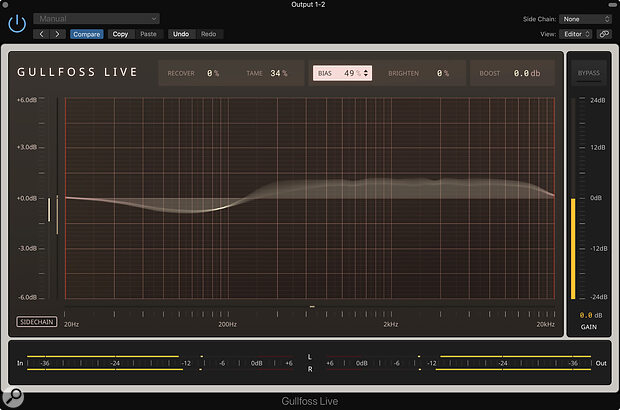 Gullfoss Live Edition, which trades some of the quality for very low latency.

Gullfoss Live has a similarly fixed internal quality setting, as a result of the compromises necessary to achieve the stated (roughly 2ms) latency figure. The normal Gullfoss process is described as requiring “knowledge of a 20 millisecond timeframe”, so the Live version has to incorporate a predictive element that may occasionally be less accurate on signals with a rapid rate of change. The net result is something which sounds slightly different sometimes, but which still never sound unnatural or undesirable, to my ears. Just different, and occasionally pleasingly so. Processing whilst recording is a suggested application, although I can’t think of any circumstances where I would choose to do that; live sound, or mixing for live broadcast seems a more plausible usage.

In summary, I think Gullfoss is a simply brilliant tool to have in your audio toolbox, for creative or restorative work in a multitrack mix, or for ‘rescuing’ mixed masters when there is no access to a multitrack, with its unique ability to pull out lost detail and tame frequency clashing and resonances. Yes, there are other plug‑ins that offer various forms of enhancement and a good many problem‑solvers, too, but Gullfoss does it all, and better than anything else I’ve ever tried.

I’m usually a little uncomfortable using software processes that I can’t fully understand — I can’t say that I’m totally across the complexities of how Gullfoss works, but it works so well that I’m happy to use it anyway. A fixer/enhancer like no other, with an infinite array of applications.