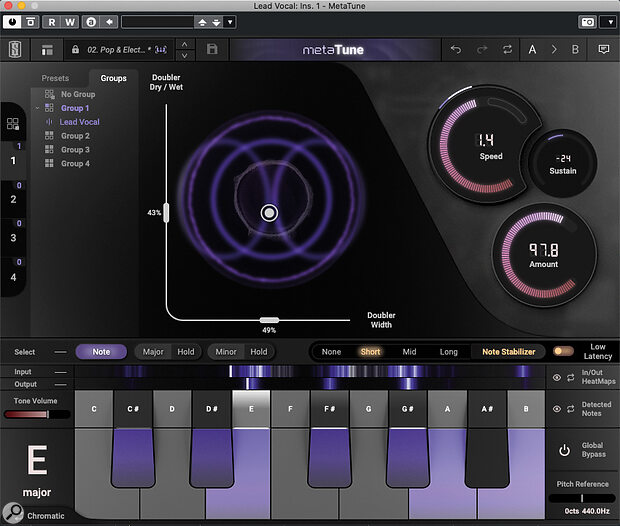 All MetaTune’s key controls are contained within a single window, making for a very efficient workflow.

For ‘stealthy’ pitch‑correction that’s designed not to be obvious to the listener, offline tools such as Antares’ Auto‑Tune running in its Graphical Mode, or Celemony’s Melodyne are incredibly powerful tools. But getting the best results from them can take time and require considerable skill, and, while it’s certainly possible to use such tools for more creative pitch‑processing effects, that’s not really their forté; for one thing, since they work offline they obviously can’t be used during a performance, only after the fact.

The other approach to tuning is to use a plug‑in that performs its pitch‑correction in real time and there are now plenty of these to choose from, including those that come bundled with most of the leading DAWs. Real‑time plug‑ins are generally a better option for the more creative end of the pitch‑correction spectrum, but when it comes to more transparent correction they can have their downsides. For instance, it can be tricky to find a setting that handles both the note onsets and the natural vibrato in sustained notes equally well.

This is where Slate Digital’s new MetaTune plug‑in comes in. It’s a low‑latency, real‑time pitch‑corrector that its designers say is not only capable of both subtle pitch‑correction and creative pitch‑based effects, but can do both really well. To that end, it offers some novel and interesting pitch‑correction features, as well as a useful vocal widening/thickening effect, of which more later. Importantly, it has also been designed to be just as easy to use as a regular pitch‑correction plug‑in.

MetaTune is available to buy outright — in which case, it’s priced somewhere in the middle of the mainstream pitch‑correction competition — but it’s also available as part of Slate Digital’s All Access Pass subscription service, which packs a considerable punch for a modest monthly outlay.

It’s a low‑latency, real‑time pitch‑corrector that its designers say is not only capable of both subtle pitch‑correction and creative pitch‑based effects, but can do both really well. 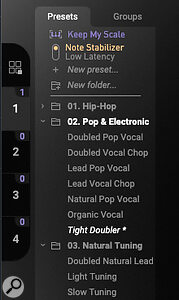 MetaTune’s presets include useful options for deliberate effects, subtle pitch‑correction and vocal doubling.MetaTune’s GUI is clean, attractive and easy to navigate. Clicking a preset name on the GUI’s top toolbar will pop open a full preset panel, in which there are various creative and corrective options to choose from. On the main GUI, you’ll find the familiar Speed and Amount controls, which do exactly what you’d expect: they set the speed at which notes are nudged towards the desired pitch, and the degree of correction. Set a fast Speed and a high Amount, for example, and you’ll hear the sort of seriously exaggerated pitch‑correction that puts you into Cher, T‑Pain or Trolls territory; lower amounts and, particularly, slower Speeds will sound rather stealthier.

MetaTune defaults to using standard concert pitch (A=440Hz) but this can be changed using a slider at the bottom right of the GUI. Tuning also defaults to the chromatic scale, but another panel, this time opened from the bottom of the GUI, allows you to select a different key/scale combination for MetaTune to use as its pitch targets. Notes within the currently selected key are helpfully highlighted in purple and you can also toggle notes on/off using the keyboard, if you want to manually include or exclude specific notes. 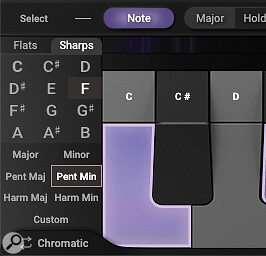 MetaTune gives you full control over the key/scale used for the pitch‑correction process.If you don’t know what the key/scale combination is for your vocal/project MetaTune can also help you work out which one will work best. Clicking on any note label above the key graphics will generate a tone at that pitch for reference against notes within your audio and, probably even more useful, a pitch heatmap feature can highlight the most frequently occurring notes in both the audio input (pre‑correction) and audio output (post‑correction). With this visual feedback, you can soon narrow down your own trial‑and‑error selection of the most desirable key/scale.

Tuning With A Twist

The elements that I’ve discussed so far should feel pretty familiar to anyone who’s used a tuning plug‑in before, but MetaTune also offers a number of more intriguing features.

The Sustain control, for example, is a really interesting twist. Essentially, this allows MetaTune to adapt its Speed setting to suit the length of notes in the incoming audio. Positive Sustain values encourage smoother note transitions, while still ensuring a stable pitch on sustained notes (generally by allowing MetaTune to use slower values than you’ve specified with the Speed control). Negative Sustain values, on the other hand, encourage the hard‑tuning effect — but, importantly, they also preserve the vibrato on sustained notes. This is a novel and really useful feature, which is also easy to set up.

Another cool departure is that MetaTune’s Speed control can be set lower than 0ms, with ‑3ms being the fastest setting available. As you might expect, this setting results in an extremely hard pitch‑correction effect. Slate have understandably been reluctant to divulge precisely how this works on a technical level, but they have been keen to point out that it doesn’t involve lookahead — in other words, it doesn’t add any additional latency, which means that it can still be used for real‑time effects. However it works behind the scenes, if you want the correction to sound extreme, Speed’s super‑fast setting will deliver that.

The Sustain control... is a really interesting twist. Essentially, this allows MetaTune to adapt its Speed setting to suit the length of notes in the incoming audio.

Yet another MetaTune USP is its Note Stabilizer feature. This attempts to address the problem of ‘fluttering’ that you sometimes hear when using real‑time pitch‑correctors to apply hard automatic correction, and the processor’s engine struggles to decide to which target pitch a note should be corrected. To counter this, Note Stabilizer can be set to ignore pitch variations shorter than 40, 80 or 200 ms. Pitch‑correction is still applied when this is engaged, but the correction is held stable, so that there’s less chance of hearing unwanted ‘flutter’. This processing does introduce some latency (about 280ms) above the nominal latency of the plug‑in (approximately 3ms, according to my tests), so is more suitable for use on pre‑recorded parts, but when used in conjunction with MetaTune’s faster Speed settings it generally enables you to ‘dial out’ any note flutter very effectively.

As I mentioned earlier in passing, MetaTune isn’t only a pitch‑corrector — it also includes a Doubler effect, which automatically generates two ‘replica’ voices based on your main, pitch‑corrected vocal. This is designed to create a stereo‑widening and thickening effect, akin to double tracking. Via the visualiser in the upper centre of the display, you can adjust the wet/dry balance between the main vocal and ‘doubled’ versions, and set the stereo width of the latter. There are obviously dedicated plug‑ins that can do this sort of thing, but this one is a doddle to use and it works very well. It is the ideal tool to give a chorus vocal that bit more impact.

Finally, over on the far‑left of the upper panel you’ll find a strip of controls for MetaTune’s Groups feature. This allows you to link up to four different groups of MetaTune instances in the same DAW project. Each instance of a Group shares settings, so if you make changes in any one instance in a Group, they’ll be applied instantly to the other Group members. This is a feature I’ve seen in other plug‑ins before, but not in pitch processors. It’s neatly implemented, and I found it easy move instances in and out of Groups as and when required. It could save a lot of time and hassle when you’re configuring settings across multiple MetaTune instances used on, say, stacked backing vocals.

Once you’ve determined your required key/scale combination, initially dialling in your style of your pitch‑correction simply requires you to set the Speed, Sustain and Amount controls. And in answer to the most obvious question, yes, with suitably modest settings, MetaTune can certainly deliver a gentle, natural‑sounding, pitch‑correction. You obviously don’t get the note‑specific control offered by the likes of Melodyne since it reacts to all of the incoming audio, but for a real‑time plug‑in it does a very respectable job — it’s easily on a par with the best of its competitors. Of course, it’s also possible to automate parameters, including bypass, using your DAW, should you need to refine MetaTune’s response to a particularly troublesome part. 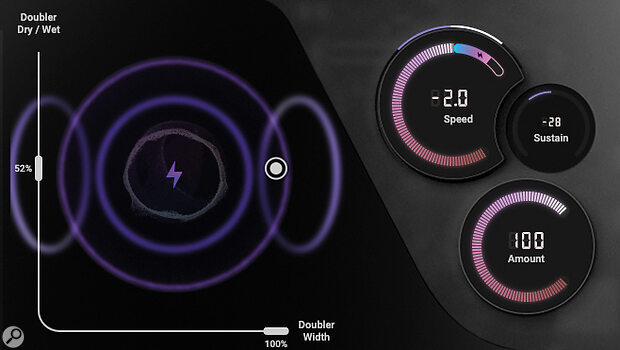 Arguably, though, MetaTune’s biggest strength is in making more obvious pitch‑correction effects really quick and easy to achieve. I tested its performance with a number of different vocal styles (but mainly pop and hip‑hop), genders and tempos. As with Auto‑Tune, MetaTune’s Speed and Amount controls make dialling in this kind of effect simple — but MetaTune makes it easier to take that effect further. Importantly, those very clever Sustain and Note Stabilizer options mean that you can finesse the results much more than with other real‑time plug‑ins; an obvious hard‑tuned effect needn’t also result in the dreaded note flutters. If you regularly use creative pitch effects on your vocals, then, and particularly if you like to sing through the effect, MetaTune could make your life easier.

That alone might be enough for some potential users, but the Group and Doubler options are the icing and cherry that finish off the cake. Both functions are nicely executed, and the Doubler may well mean that you don’t need to invest in a specialist doubler plug‑in. Yes, you are doubling the pitch‑corrected vocal, which means that the results will sound as natural or unnatural as your chosen pitch‑correction settings dictate, but the results almost always sound appealing.

If you regularly produce pop, hip‑hop, R&B, or electronic music, where obviously pitch‑corrected and widened/thickened vocals can be a core part of the sound, MetaTune should have very obvious appeal, even if you already have access to more conventional pitch‑correction tools.

When it comes to the more natural, gentle‑touch transparent results, I’d almost certainly choose MetaTune over other such plug‑ins too, partly because it’s so user friendly, but largely because of its ability when it comes to coping with vibrato. The only real caveat is that, as with other real‑time pitch‑correction processors, it can struggle when processing a vocal phrase which features sustained notes with a particularly strong, wide, vibrato — but even in this scenario, MetaTune’s Note Stabilizer means that it fares rather better than its direct competitors.

In summary, then, I’ve found MetaTune impressive. Slate Digital have designed it to deliver something different from conventional automatic pitch‑correction plug‑ins and they’ve succeeded: whether your needs are corrective or creative, I can’t think of a better real‑time pitch‑corrector.

MetaTune is a real‑time pitch‑correction plug‑in that boasts several novel pitch‑correction features, as well as a respectable doubling effect, and can deliver effective results with a minimum of user input.