Billed as a ‘rhythm machine’ which solves the problem of rhythmic rebowing, this addition to Spitfire’s Symphonic range provides a set of propulsive note repetitions recorded at Air Studio’s Lyndhurst Hall. It’s not a phrase library, but if you need the kind of driving short‑note string ostinatos heard in countless contemporary action‑film cues, Symphonic Motions (12.1GB installed) serves them up at the touch of a key. 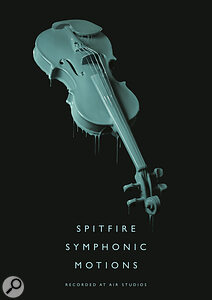 The library features an ensemble of 22 violins and 12 cellos playing over a C2‑C#7 range, with cellos covering the low register up to A3. Samples are presented in Spitfire’s favoured CTA mic positions along with three excellent stereo mixes by engineer Jake Jackson. The Decca Tree (which loads by default) gives you the classic grandiose strings experience, the close mics sound immediate and punchy, while the floaty, transparent ambient miking will sound fabulous wafting around in the rear speakers of a surround mix.

Repetitions are played in a variety of styles, including ‘normale’ (the trademark Spitfire spiccato sonority), a more mellow spiccato con sordino, sul ponticello (a nervy, wiry timbre) and the soft, delicate sul tasto. Each delivery is played in a choice of sixth, eighth, 12th and 16th‑note subdivisions with a detaché (separated) and ‘smooth’ (no gap between notes) bowing option. Col legno and pizzicato performances wisely omit the faster subdivisions. The latter’s samples are a revelation: who knew low‑register pizzicato chords make such a great rhythmic ostinato? In addition, the unhelpfully named ‘ostinato’ articulation (an accented note quickly followed by a light, slurred short note one, two, three or four semitones above) adds a welcome dash of melodic colour.

Spitfire’s pegboard‑like ‘Motions Grid’ maps these samples across 12 pitch zones, each of which can be assigned one of the 40 above‑mentioned styles. A small coloured light shows each assignment. You can thus easily program (say) shimmering sul tasto 16th‑note violin chords over cello spiccato eighth notes, or introduce a touch of rhythmic chaos by mixing straight eights with 12th‑note triplets. If inspiration fails, hitting ‘randomise’ will conjure up Spitfire’s intriguing preset concoctions. Velocity‑sensitive short‑note ‘overlay’ samples performed in the six main styles outlined above are a great extra, which you can use to add your own tunes and accents or play standalone.

Whether your interest lies in standard cinematic spiccatos or experimental polyrhythms, these pulsating, motoring, urgent‑sounding repeated notes have it all covered.

Whether your interest lies in standard cinematic spiccatos or experimental polyrhythms, these pulsating, motoring, urgent‑sounding repeated notes have it all covered. The players’ lightly accented rhythmic feel is right on the money, and the seamlessly looped repetitions (which sync to your song tempo) sound surprisingly natural over a wide tempo range. My only complaint is the GUI design, which renders the all‑important note values in teensy‑weensy, hard‑to‑read text and devotes acres of space to three enormous unlabelled controls which conceal over half of the playing styles. Nevertheless, five stars for musical effectiveness, great performances and majestic sound.