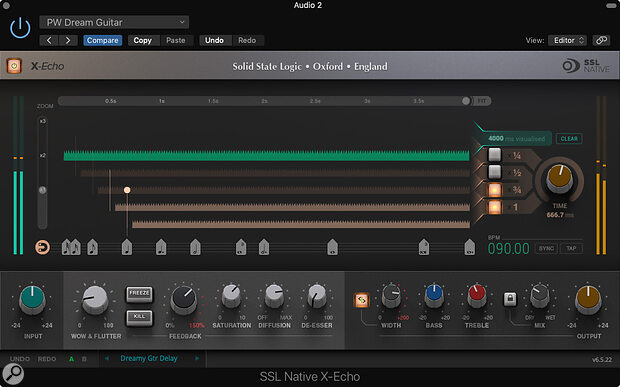 SSL Native X‑Echo is a tape‑echo plug‑in that’s inspired by the sound of early hardware units, not least the Echoplex, though it doesn’t purport to directly emulate any specific machine. Rather, it gives you the tools you need to tailor your own delay sound. To help capture the vintage vibe, the plug‑in makes use of SSL’s signature saturation and warmth algorithms plus adjustable wow and flutter but it also includes a newly designed reverb engine for adding diffusion to the delays. It is compatible with all the usual Mac and Windows hosts (VST2/3, AAX and AU formats) and copy protection is via an iLok account, though it doesn’t require you to have a physical iLok dongle.

The most desirable characteristics of vintage tape units have been modelled; there’s EQ in the feedback loop, soft clipping and the ability to self‑oscillate (it is possible to adjust the feedback to over 100 percent) for example. In the name of authenticity, there’s also the addition of low‑level tape hiss, but while that’s always on, it’s too low to cause problems and does actually make the end result sound more tape‑like. A less ‘vintage’ addition is a Freeze function, which keeps the delays repeating indefinitely. Another is a delay Kill feature, which kills the feed into the delay engine. SSL added these for the benefit of those wanting to create drops or risers in EDM‑style compositions. There’s also a built‑in, variable‑depth de‑esser to tame sibilance build‑up in the delayed sounds. Less esoteric, but no less useful, are separate bass and treble EQ controls and the expected wet/dry Mix control. Finally, saturation and wow/flutter parameters are fully variable.

I have to say that it sounds wonderful, and this is due in no small part to the Diffusion control.

The interface is designed around X‑Echo’s functionality rather than resembling a hardware tape delay, and includes a very practical display that shows how the delays from the four ‘tape heads’ interact. Buttons turn each of the heads on or off. The display can also show the first four seconds of waveform once the DAW is started along with waveforms of the repeats.

Clicking the magnet icon shows note values below the delay tape markers and it is possible to lock repeats to note values using a single mouse click; the tempo may either be set manually, via tap tempo or via host sync. Delays can be sync’ed to the nearest note value, another non‑vintage feature, and it’s also possible to produce a stereo effect from a mono input via a process that uses a novel phase‑shifting technique. A button sets the delays into a left/right ping‑pong mode and, with the width control cranked into the over 100‑percent zone, the sound becomes very spacious indeed.

So far, I’ve largely outlined how this plug‑in goes about its business but while all that makes it easy to set up, what really matters is how it sounds. I have to say that it sounds wonderful, and this is due in no small part to the Diffusion control, which takes the sound from hard tape repeats at one end to a lovely diffuse reverb at the other. In between are some deliciously floaty ambient treatments that blend delay with a reverb tail, which is attached to each of the repeats. The Saturation control warms things up in a very believable way, while the Wow and Flutter control can go way beyond ‘worn transport’ emulation to deliver interesting chorus‑like effects.

In short, the illusion of a vintage tape echo is very convincing if that’s what you’re after but there are other plug‑ins that can do that. For me, the real value of X‑Echo is in how it’s able to combine the best of vintage tape echo with modern reverb and DAW‑friendly features to create anything from retro slap‑back and ’60s guitar instrumentals to contemporary vocals and dreamy ambient soundscapes.