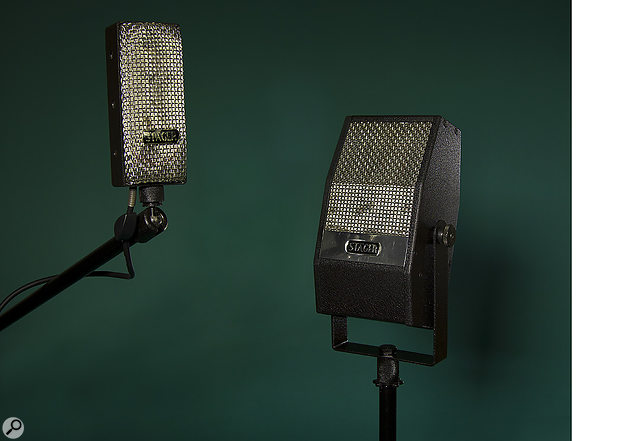 Hand made in Nashville, these mics use old-school materials and manufacturing techniques to deliver that classic ribbon sound.

Boutique manufacturers have become an increasingly significant part of the pro-audio industry over the last decade or so, with countless small companies making niche products like specialist mic preamps, signal processors and — especially — microphones. The availability, at relatively low cost, of sophisticated component parts from the Far East must play a helpful part in this burgeoning market, but so too does the responsiveness of these small manufacturers in recognising and meeting particular demands and fashions, offering hand-crafted alternatives that simply wouldn’t be viable for larger corporations.

Matt Stager is the man behind one such boutique manufacturer, the eponymously named Stager Microphones, based in Nashville, USA. Currently there are but two products in the company’s catalogue, both ribbon microphones and both hand-built in small batches with all the aluminium, brass and steel constructional metalwork being sourced locally. Stager even winds his own bespoke toroidal output transformers. The two ribbon microphones are called the SR-1A and the SR-2N, and they share the same core ribbon assembly and toroidal output transformer, but differ — you might say, dramatically — in their magnet systems and housings.

These are both long-ribbon microphones in the ‘old-school’ mould, meaning the ribbon diaphragm is two inches long by around a quarter-inch wide and 1.8 microns thick. However, the SR-1A is both enormous at roughly 180 x 95 x 80 mm — not including the mounting frame — and heavy, at 2.2kg, and this is in large part due to its use of dual Alnico-V horseshoe magnets. In contrast, the SR-2N is a lot more compact at 130 x 53 x 45 mm (again not including the standmount), weighs only 0.4kg, and uses Neodymium magnets.

In case you were wondering, Alnico-V is an alloy of (mostly) Aluminium, Nickel, and Cobalt (hence Al-Ni-Co), with the ‘five’ indicating a specific balance of elements within the alloy and the resulting magnetic properties. Until rare-earth alloy magnets like Neodymium were developed in the 1970s, Alnico magnets were the strongest types available, making their use essential in products like the classic vintage ribbon microphones, where the electrical sensitivity relates directly to the strength of the magnetic ‘engine’. In comparison, Neodymium magnets are a lot stronger, smaller, and lighter than the Alnico equivalent — a point which is ably demonstrated by the relative size and weights of these two Stager microphones!

Both Stager microphones are supplied in rather attractive softwood, foam-lined storage cases, with advice to always store the mics in an upright orientation. This is quite important with long-ribbon mics as they tend to sag and stretch over time if stored horizontally, potentially resulting in degraded performance. Neither review mic arrived with a user manual, and there is precious little technical information on the company’s web site either apart from some standard warnings about not applying phantom power, avoiding impacts and physical shock, protecting from air currents (eg. using a pop-filter for vocals and not placing directly in front of kick drums), and to store the mics vertically, as mentioned. I was unable to find any manufacturer’s specifications for key technical details like the sensitivity, output impedance, recommended load impedance, frequency response, or consistency of polar response with frequency... but that’s not exactly unusual from boutique manufacturers, sadly.

The enormous SR-1A has quite a traditional vintage style, obviously influenced by the big old mics of the 1930s and ’40s, like the RCA 44 and BBC AXBT. It has an unusually wide trapezoidal case, faced across the top half with a multi-layer silvered wire-mesh grille front and back, and with stainless-steel strips running just below the centre on both sides, the front one carrying the company name. The review model has a black painted casing, but apparently Stager can finish the mic in any desired colour if required. I couldn’t find a serial number anywhere on the exterior case, but the output XLR connector is located at the rear of the microphone in the lower half of the back panel. Fixed to either side with thumbscrews is a U-shaped support frame terminating at its base with a 5/8-inch threaded mic stand adaptor.

In comparison, the SR-2N is a much more modern-looking design in which the wire-mesh grille extends the full body height front and back, with a company name badge fixed just below the centre line on the front. A black (other colours are available) metal frame surrounds all four sides, and again I was unable to find a serial number anywhere externally. The review model has a captive output cable (terminating in an XLR plug) which exits the mic at the bottom alongside the integral standmount, which is a ball-and-socket arrangement as found on camera tripods. The ball is fixed to the bottom of the mic and the enveloping movable socket, which is locked with a large wing-nut, has a 5/8-inch thread to mount on the stand. This is a really neat arrangement which makes it possible to positon the mic at almost any angle very easily.

However, it appears Stager has changed the design since shipping the review model to SOS, since the company’s web site shows the SR-2N as having a fixed stalk emerging from the bottom with an integral XLR connector, and a more familiar type of sleeve-clamp stand adaptor. Matched stereo pairs of SR-2Ns are also available and are supplied complete with a vertical stereo bar (pole?) designed to allow Mid-Sides or Blumlein X/Y stereo arrays to be set up easily.

Both of these Stager microphones have an almost exaggerated ribbon character, with a very full and rich bottom end, faintly chesty mid-range, and a lovely creamy high end with plenty of transient detail and precision but without being bright or edgy at all. In comparison to other ribbons available to me for comparison (Coles 4038s, Royer SF2s, AEA R92s) both these Stager models sound noticeably weightier and fuller, even when used at a moderate distance of 8-10 inches (and close-miking obviously brings in even more low end). They both have figure-8 polar patterns, obviously, with very deep side nulls, as you would expect, and usefully wide working zones front and rear.

The manufacturers suggest that both models can be used on a wide variety of sources, but the SR-2N is apparently optimised for use with guitar amps and seems to have a slightly warmer tonality than the SR-1A, but without quite as much low-end weight. I think some of the perceived warmth comes from a slightly tamed (in comparison) top-end. I suspect the latter is also the reason I perceive slightly less detail and resolution, too. However, these are fairly subtle distinctions and there’s really not much between them in overall sound character — no one purchasing the SR-2N will feel terribly aggrieved if they hear the SR-1A afterwards!

In the absence of any published anechoic chamber measurements, I put these mics up against some known references to judge their sensitivities. I found both models to have very similar sensitivities, and while they are definitely on the low side, they are not Coles-low. I’d ‘guesstimate’ the sensitivity is somewhere in the region of 1.2mV/Pa.

So, if these mics are used in front of moderately loud sources pretty much any standard mic preamp should have more than enough gain to cope perfectly. For quiet sources and/or distant placements a preamp with 65-70 dB of gain (or the use of a 20dB in-line gain stage) would be helpful. I used my AEA TRP ribbon preamp for the review, which worked beautifully, and the Stager mics seemed to work well with its very high input impedance.

On a practical note, the SR-1A requires a strong stand and a boom with a very heavy counterweight (I mostly used a Sontronics Matrix 10) and, if suspending the mic over something (drum overheads, tuned percussion, etc.) I found the XLR plug at the rear occasionally fouled against the support yoke when trying to tilt the mic. This isn’t a big deal, and can be easily worked around in most cases, but a cable fitted with a 90-degree XLR connector would probably avoid the issue completely.

Impressive though the SR-1A is, I really fell in love with the SR-2N. I like its simple styling which hints at retro but is still quite contemporary. I loved the convenience of its ball-mount (although I fear that may no longer be available), and it sounds absolutely great in front of guitar and bass amps. I normally use my AEA R92s for that role, but the compact size of the SR-2N proved more convenient in some situations.

Overall, Matt Stager has come up with a couple of real beauties in these two microphones, and while they share many common tonal character traits, they also have their own distinctions and strengths. These are welcome additions to the burgeoning ribbon microphone market and well worth personal auditions.

The SR-2N has little competition at its price, with only the Sontronics Sigma sitting within £50 of it on the UK market. A lower-cost option is the Avantone CR-14, while the Coles 4030 and Peluso R14 are around £200 more.

For the SR-1A, most comparably priced mics are active ribbon types, such as the AEA A840, Cloud Microphones 44-A and Royer R-122 MkII. For a similar outlay, there are also several matched pair sets available such as Coles 4038s, Royer R101s, Coles 4040s and 4050s, and the stereo ribbon AEA R88.