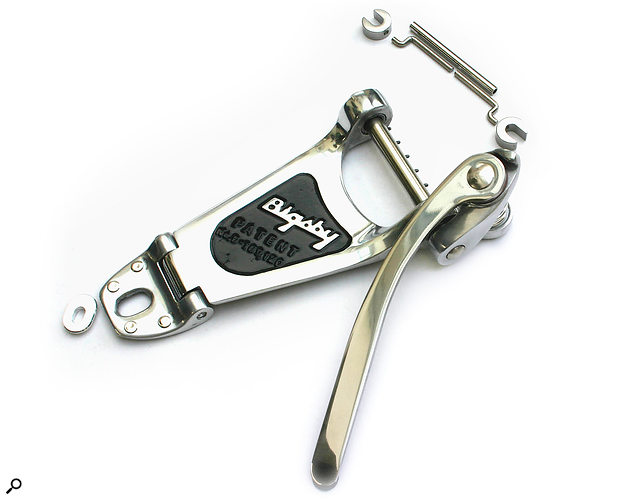 A traditional Bigsby vibrato installation requires that extra holes are drilled into your guitar, but on a vintage or valuable instrument, that might not be something you’re so keen to do. The Towner system fits many guitars that have a separate bridge and stop tailpiece. It mainly works with Bigsby B3 and Bigsby B6 vibrato units, enabling them to be secured using a single two-inch strap-button screw. The kit I had for evaluation comprised a hinge-plate adaptor with screw, and a downward tension bar assembly that fits onto the existing stop-bar tailpiece posts. As the strings pass under the tension bar, which has a rotating outer sleeve to help avoid tuning problems, the sustain of the guitar should not be affected, and the string tension will also keep the front of the Bigsby unit pressed firmly against the guitar body. Using the existing studs, the sustain bar may be raised or lowered to taste, though it needs to be set high enough that the strings clear the tail end of the guitar’s bridge (otherwise they could bind). The tension bar comprises two horseshoe-shaped end pieces that fit around the tailpiece studs, two angled metal bars that slot into them and a roller-sleeve that slides over the two metal bars. It’s designed to work with the Bigsby B3, Bigsby B6, Bigsby B11, Bigsby B30 and Bigsby B60 tailpieces.

The hinge plate adaptor acts as a retainer for Bigsby B3 or B7 units and is held in place by the included two-inch strap-button screw and your existing strap button. (Note that some strap buttons may need drilling out to accommodate the screw.) Essentially, the hinge plate adaptor is a small, machined aluminium plate, with an asymmetrical slot that acts as a locating washer for the button and long strap-button screw, and it can be fitted either way up in the Bigsby’s tailpiece recess, to suit the distance the strap button is from the top of the guitar body. This holds the Bigsby in place and also lifts the strap button clear of the metalwork. For guitars, such as Les Pauls, on which a Bigsby extends too far onto the guitar body, interfering with the tension bar/tailpiece studs, a V Block spacer is available to set the tail end of the Bigsby back by half an inch.

I fitted the system to one of my Gibson SG Standards; guitars with a combined bridge and tailpiece are not suitable candidates. Because of the strap-button placement, the tail end of the Bigsby sat slightly proud of the body, but that didn’t seem to cause any problems and I didn’t want to have to drill another strap-button hole. Both metric and imperial versions of the tension bar end fittings are available; for genuine Gibson guitars the imperial version should be selected, whereas most clones accept the metric size. Before the guitar was strung, the Bigsby had a bit of side-to-side wobble because of play in its hinge mechanism, but once strung to pitch with the strings passing under the tension bar, it felt far more stable. In a permanent installation, a screw would pass through the bottom of the Bigsby spring cavity to secure the vibrato to the body but that wasn’t needed here. Once the stretch had been taken out of the strings, the tuning remained sensibly stable too.

Installing a Bigsby using this adaptor kit achieves its aim of letting you return the guitar to its original condition should you decide to remove it. It’s dead easy to install and gives you peace of mind in knowing that you’ve not had to modify your guitar to fit it.

Prices vary according to your specific needs. See web site for full details, but full Bigsby B3 kits start at $169.99.

Prices vary according to your specific needs. See web site for full details, but full Bigsby B3 kits start at $169.99.