Can this tiny amplifier really sound as good as a full-sized amp?

When I first opened the box of this device, I thought I was looking at yet another guitar amp emulating pedal, but despite its size, it turned out that this was actually a full 30W guitar amp. Given the format and the modest weight (350g) I was, to say the least, intrigued! Hand-built in Italy using high-quality analogue parts, the StompAmp Brown is powered by a universal mains voltage external PSU that supplies 24V DC. There's no technical detail provided about the actual amplifier technology that's used, other than that it is highly efficient — so, a Class D module perhaps? Certainly the amount of heat generated is quite small. We're told that the tone stack is a variation on the classic Fender-style topography, offering bass, middle and treble controls, and offering enough range to work happily with both humbucker and single-coil pickups. The word 'brown' in the title also suggests that a Fender amplifier provided the inspiration for the StompAmp's voicing. 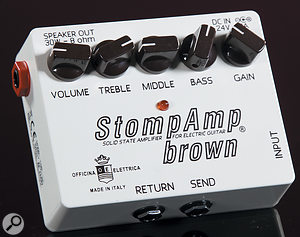 Outwardly, the unit is simplicity itself.The white-painted die-cast box houses the three tone controls plus volume and gain knobs, the latter adjusting the amount of overdrive from nominally clean to pretty raunchy. The speaker jack has a red plastic nut as an extra means of identification. Two further jacks give us FX loop send and return points, which is useful, given that the amp has no effects or reverb built in. A red LED shows that the amp is powered up — and that's pretty much it.

I tested the amp using an 8Ω, 12-inch speaker cabinet and right away was surprised by just how loud this thing goes. The level of background noise is also creditably low. Without any added effects, the sound is a little dry, just as you'd expect but, as an amplifier, it actually sounds and, importantly, feels very organic. At lower gain settings, the sound cleans up nicely and it's easy to find a combination that adds just a little 'hair' to the sound, so that you get a little extra bite as you dig in. A touch more gain gets you into blues territory, again with plenty of dynamics, and it responds well to picking intensity, but there's ample gain on tap if you need more of a classic rock vibe. Those tone controls respond much as you'd expect, with a definite Fender-influenced tonality, and overall I was very pleasantly surprised at what this little amp could do.

Having those send and return sockets also means that, for live performance, the StompAmp can be integrated into a pedalboard setup: you can easily patch effects in before the amp or in the effects loop, and only need power and speaker connections to get up and running. Alternatively, if you need a backup amp, in case your main amp blows up, you could always keep a StompAmp in your gig bag, confident that, come what may, the show will go on!