Steinberg have packed a lot of new functionality into their bargain upgrade to Cubase.

Cubase 7.5 is, in many ways, a more refined Cubase 7, building on the many point releases Steinberg have issued throughout the year. These addressed much of the initial criticism certain areas of the program received, particularly concerning the aesthetics of the Mix Console, but Steinberg's focus in Cubase 7.5 is very much on production workflows. The company have clearly been spending time looking at various workflows users find essential in competing music and audio software.

If you were to ask an audio engineer fluent in Pro Tools to list the features he or she might miss the most when using a competing product, I'd be willing to bet that Playlists would be high up that list — especially if said engineer records orchestras, drum kits, or anything involving multi-take, multitrack audio. For those not familiar with Pro Tools, the Playlist feature basically allows you to have multiple versions of different material on the same track. For example, say you're recording a multi-miked orchestra across 32 tracks and you record a take. It's not quite right, so you want to record another take. What do you do?

In Cubase, traditionally, you'd mute the initial take, create another 32 tracks, and record again; and if you keep recording takes, the number of tracks can build up and the management of the project can become a nightmare. With Playlists, however, you can simply group the tracks together, create a new Playlist, and suddenly you can record straight away onto the new Playlists, but still the same tracks. Better still, you can now switch between the different takes from a pop-up menu of available Playlists without any of the nonsense of muting and unmuting different sets of tracks. And when it comes to editing, it's easy to create another Playlist and copy and paste material from the different takes to create the master.

For years, people have been pleading with Steinberg to add a Playlist-like feature to Cubase (and Nuendo, for that matter), and while Steinberg have looked at the problem of dealing with multiple takes with features like track lanes, nothing has quite come close to the simplicity of Playlists. So perhaps the biggest new feature in Cubase 7.5 is Playlists — by which I mean something Steinberg have called Track Versions.

The basic operation of Track Versions is straightforward. Say you've got a single vocal track, for example, and you want to try a different approach. Rather than create a new track, as you might have done before, you can hover the mouse over the track name, whereupon a new Track Versions button becomes visible. Clicking the small arrow opens the Track Versions pop-up menu, and you can choose New Version to create a new, empty Track Version. Cubase automatically names the original Version 'v1' and the new Version 'v2', and the Version name now appears to the right of the track name. You can now switch between the two Versions via the Track Versions pop-up menu, which also contains commands to rename, delete and duplicate the current Version.

In addition to this very Pro-Tools-like way of managing Playlists — sorry, I mean Track Versions — there's also a more Cubase-like way of accessing the same functionality. Steinberg have added a new Inspector section called, unsurprisingly, Track Versions, and this lets you switch between Track Versions and access the various commands in a much more friendly and intuitive manner. 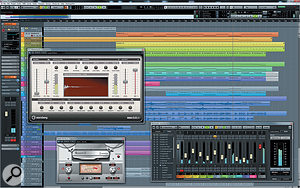 One of the neatest things about Track Versions is that Steinberg haven't just limited their use to audio and MIDI tracks; you can also use them with Chord, Tempo and Signature tracks. This is great, since it means Cubase finally gains Logic's ability to try out different tempo variations, although weirdly, the Track Versions Inspector section is not available on the Tempo or Signature Tracks, which have to be handled using the pop-up menu approach.

I wonder if the Track Version ID system might be exposing the user to more of the internal workings of Track Versions than is necessary, although power users will no doubt appreciate having full control. However, you can simplify working with Track Versions across multiple tracks by using the Group Editing feature introduced back in Cubase 6, which guarantees that Track Versions will be consistent across all tracks in a folder, and means you shouldn't ever have to worry about assigning common IDs.

Steinberg's implementation of 'Playlists' is powerful, and, in terms of simplicity, is only slightly let down by the fact that Cubase doesn't have a more generalised track grouping feature, meaning you have to work with folders and Group Editing. That said, since Pro Tools doesn't have folders, some users might prefer Steinberg's approach. Either way, with one exception, Track Versions are going make users of other music and audio software very jealous — especially, at least for now, Nuendo users!

Now You See Me…

Another new feature in Cubase 7.5 that will also seem familiar to Pro Tools (and Digital Performer) users is Track Visibility, which brings the Visibility functionality introduced in version 7's Mix Console to the Project window. The familiar Inspector is now divided into two tabs: one for the standard Inspector and all its various sections, and the other for Visibility. As with Channel Visibility, Track Visibility shows the list of tracks in the current Project, and you can toggle the visibility of these tracks by clicking the dot to the left of the track name. The hierarchical nature of the Track List is preserved, so you can also hide and show entire folders of tracks by clicking the dot next to a folder. 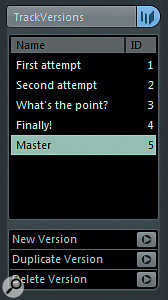 Now, you might be thinking that this sounds better than the similar Channel and Rack Configurations feature in the Mix Console window, which only stores four different states — and it is. So much so, in fact, that Steinberg have replaced it in version 7.5 with a similar Channel Visibility Configurations feature, and you can now choose whether Channel Visibility and Rack states are linked in a configuration with a new option found in the Rack Settings menu.

A particularly handy touch is that it's possible to synchronise the visibility of tracks and channels, although this is done by way of some of the cryptic interaction design of which Steinberg seem to be so fond these days. If you hover the mouse over the heading of the Visibility tab, a dot will appear to the right of the word Visibility. The dot will become tumescent as you hover over it, and a click will reveal the 'Sync Track/Channel Visibility' pop-up menu, allowing you to synchronise visibility with any or all of the available Mix Console windows. The dot will then display the number of the synchronised Mix Console window, although this is confusing if you have multiple Mix Console windows synchronised, as only the number of the lowest-numbered Mix Console will be displayed.

In addition to toggling the visibility of tracks manually, Steinberg have also added some clever features for some common workflow scenarios, and this is arguably where the new Visibility feature starts to become really useful. First of all, as you might expect, there's a Filter Track Types button (at the top of the Track List) that displays a pop-up allowing you to toggle the visibility of different track types: Audio, Instrument, MIDI, Group, FX and Other. It seems a bit much that Other encompasses eight different track types (Arrange, Chord, Marker and so on), but there are plenty of ways to work around this, as we shall see.

Next to the Filter button is an indicator that displays how many tracks of the currently unfiltered track types are visible. So, for example, if you are only showing audio tracks and you have 16 audio tracks in your project with half of them hidden, this indicator will display 8/16. The indicator also works as a 'show all' button of sorts; if you click it, all unfiltered tracks will be made visible. So in the previous example, we would see all of our 16 audio tracks again; but if we had filtered out the display of MIDI tracks and we had 100 MIDI tracks in our project, these would remain hidden.

The new Visibility tab in the project window's Inspector enables you to hide and show tracks and folders.

Why Art Thou, Rack?

Cubase 7.5 removes this limitation and lets you have multiple outputs from an Instrument track. Assuming you have a plug-in with multiple outputs, you can now activate these outputs by clicking the new Activate Outputs button that appears to the right of the plug-in's name in the General section of the Inspector. As you enable outputs, extra channels will appear in the Mix Console window, and these can be accessed in the project window as sub-tracks.

By integrating the new Track Visibility functionality into the Project Logical Editor, it's easy to come up with custom visibility commands, such as this one to hide and show the Video track.

Overall, Cubase 7.5 is an impressive release, and one almost gets the feeling Steinberg could have gotten away with calling this new version Cubase 8! It's not Cubase 8, of course, but there are many substantive features here for a relatively inexpensive upgrade fee, Track Versions and Visibility being the obvious ones. Cubase 7.5 is also quite a dramatic improvement over Cubase 7, especially compared to the first 7.0.0 release, and this is largely thanks to the 7.0.x releases mentioned at the start of the review.

A few changes continue to niggle, such as the appearance of more and more cryptic dots in the user interface. In 7.5, the project window's Visibility tab is a good example of this, but prior to 7.5, these dots had also started showing up in places like the audio insert slots in the Inspector. Where, in the original Cubase 7 release, inserts would display a power button when the mouse hovered over them, in recent versions all you see are three dots, and you can only discover the purpose of these dots by moving the mouse over them. While I suppose you quickly learn the left dot is the power button, the bottom dot accesses presets, and the right dot lets you select a different insert, it just seems unnecessarily cryptic.

Niggles aside, if you're already using Cubase 7, there's really no reason not to upgrade. If you're still using a previous version, I'd say this would be a good moment to move to the latest and greatest. And if you're using software from another company, Steinberg's release schedule must be starting to sting!

Cubase 7.5 builds on the foundation of Cubase 7 with powerful new features that help users streamline their working methods, and adds a great deal of polish and refinement.