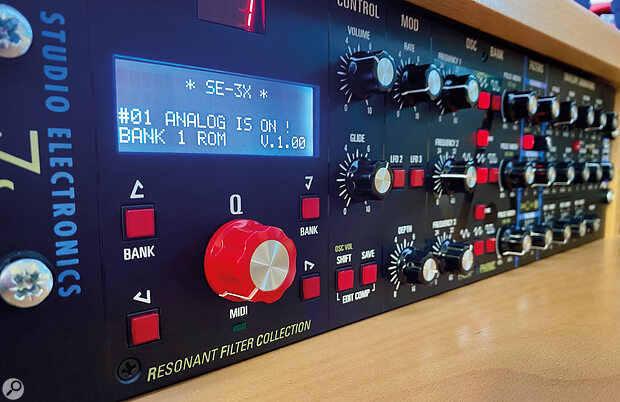 A long way from their rackmounted Minimoogs, Studio Electronics’ SE‑3X is a four‑filtered, paraphonic monster.

It could be argued that throughout the late‑’80s and early‑’90s, Studio Electronics were partially responsible for keeping the analogue dream alive. During this period, classics such as Minimoogs were demoted to the secondhand ads, cast aside by many as outdated and unfashionable vintage relics. Meanwhile, Studio Electronics were busy creating the Midimoog; a beast of a synth, which contained the guts of the original Mini, but in the convenient state of a fashionable rackmounted synth, and as the name would suggest, fitted with MIDI.

Unsurprisingly, the Midimoog was quite a hit, but it wasn’t until 1993 that Studio Electronics realised that there was a desire for something cheaper, but with similar criteria. Boasting valuable credentials, such as programmability, the SE‑1 materialised, followed a few years later by the SE‑1X.

Nearly 30 years on from its inception, the original SE‑1 has evolved into the SE‑3X. The similarities between models is reassuring, not least because the architecture draws inspiration from the Minimoog, but with a number of major enhancements that make this 3U rackmounted monster a tempting prospect.

The signal flow begins with three voltage controller oscillators. Each is identical, offering saw‑tooth, triangle and square wave, with the latter being open to pulse‑width modulation. Moreover, it’s possible to activate all three waves simultaneously; this in itself can be useful, but can sound a little strange, due to the intrinsic nature of layering three waveforms at the exact same frequency. Apply some PWM to the square while in this layered state, and you get a really interesting twist to the sound, as though the oscillator is arguing with itself over the exact tuning. Play this in the lower pitch register and you’re in an immediate drone zone.

While in this single VCO state, the SE‑3X easily demonstrates it superior sonic credentials, but it’s through the application of the additional two VCOs that the texture becomes massive. In true Moog/SE fashion, the tuning pots are immediately accessible, making it easy to place the VCOs at the pitch you require. The nature of the default coarse tuning reflects semitone steps, while the liquid crystal display jumps to the tuning page, allowing you to tweak it to your preferred octave or interval. The review model, which is SE‑3X serial number 0001, exhibits a strange pot behaviour, where the tuning doesn’t always settle right on the +12‑octave point, bizarrely nudging between a semitone step either side. I’m assured by SE that it gets easier with experience, as familiarity with the onboard digitised pots increases. The pots are necessarily digital to allow for patch storage, but feel very robust and ‘analogue’. I quickly learn that by overshooting my required value destination, dialling the pot back hits the mark more easily. SE were of course correct!

Fine‑tuning is equally simplistic; by pressing the shift key, the coarse tune pots switch to cent‑based fine‑tune mode, allowing each oscillator to be marginally offset for a thicker texture. Each VCO is equipped with its own PWM pot, and by way of a similar ‘Shift’ technique, the volume of each VCO can be adjusted via the PWM pot. Each VCO is tunable over five octaves, which when added to my 88‑note MIDI controller keyboard allowed for a vast range, from the low‑register audible ‘blip’ to the barely audible high‑note squeal. VCOs two and three are also sync’able, with a simple press of the sync buttons, helpfully located between each VCO.

So to the first of the major new inclusions in the feature set; the SE‑3X offers either monophonic or paraphonic operation. In mono mode, the three VCOs are stacked to present a single note. Granted, this single note could actually be three notes if you set your VCO tuning in such a way that you hear a chord, but triggering will always occur from a single note.

Where paraphonic differs is by offering the performer the potential to use each VCO for its own played note, for playing triads or chords with up to three notes. This effectively turns your SE‑3X into a very basic polysynth with three‑note polyphony, but the paraphonic ethos means that the synth is reliant on a single envelope and amplifier. It’s...