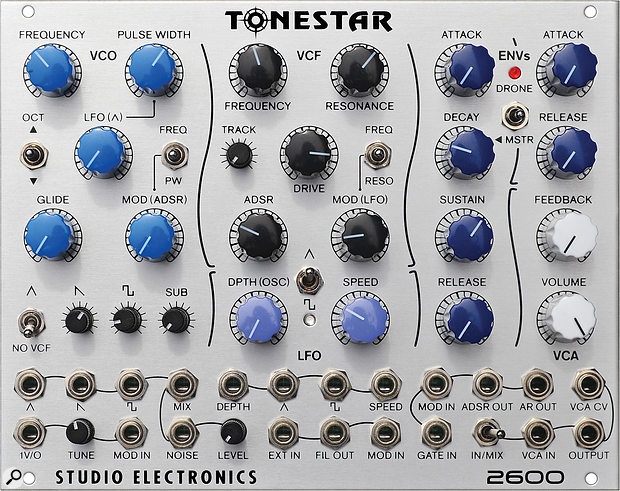 The Studio Electronics Tonestar 2600 is a complete analogue synthesizer voice in just 32hp. It consists of a single VCO, a sub oscillator and noise generator processed by a four-pole low-pass filter based on that of the legendary ARP 2600. While the LFO is limited to just a square or triangle wave, unusually (for a very compact synth) there are two envelopes, ADSR and AR types, in another nod to ARP. Pushing the unusual angle still further, its 21 patch points are capable of more than you’d initially guess thanks to a quirky ‘outs to outs’ concept.

Even before patching, the Tonestar delivers fat, American-flavoured synthesis of a quality that’s immediately obvious and reassuringly familiar. In black, white and several shades of blue, the knobs handle beautifully and the subtle panel graphics contribute to a module that, although densely-populated, doesn’t feel cramped. The only control less than readily accessible is the ‘In/Mix’ switch; slotted in between patch points it determines whether external audio should mix with or replace the internal sources. Had I been offered a choice, I’d have swapped the full-sized Glide control with the rather-too-small oscillator fine tune, but that’s about as nit-picky as I get. The Tonestar is a seriously good module!

The VCO has a rich, Minimoog-like presence and sports a coarse tune, octave up/down switches and the aforementioned weeny fine tune. Pulse-width modulation is always on tap, but you don’t have to rely on its thickening powers as with many single VCO synths. To add a touch of extra depth, the square-wave sub oscillator is always ready to be brought in using another of those reduced-scale knobs. Usefully, you can mix the levels of each waveform freely — OK, apart from the triangle wave; this has a fixed level, but a switch to route it through the filter, direct to the VCA or ‘off’. Introducing an unfiltered triangle wave is a classic ‘filling out’ trick, particularly effective in highly resonant patches, not that the filter is in any way lightweight!

The four-pole VCF is silky, fat and smooth, its resonance sweeter than syrup. Even when resonance is high, you needn’t worry about loss of bass presence thanks to a versatile pre-filter overdrive that contributes massively to the filter’s character. Fitted with fully variable key tracking, the filter’s modulation choices include the ADSR and CV input, plus an LFO eager to wobble the cutoff frequency or resonance. The CV inputs cater for -10V up to +10V, but while there’s a CV input to modulate LFO speed, its range remains at approximately 0.25 to 55 Hz, externally controlled or not. Flocks of tripping birds are ready to launch themselves whenever a moderately paced triangle LFO is applied to resonance, its effects so appealing you’ll soon be experimenting with more versatile external modulation sources, such as Sample & Hold.

Lovers of sound effects and atmospherics can flip the envelope switch to ‘drone’, removing envelope control over the VCA. You can then enjoy the kind of eternally sustained notes that still confuse new ARP Odyssey owners to this day. Speaking of envelopes, the Tonestar’s fast attack and punchy decay could easily earn it a role as a complete sequencing machine — just add a sequencer! When the envelope switch is in the ‘master’ position, the ADSR shapes both VCF and VCA, freeing up the AR generator for other roles, eg. controlling the LFO speed or depth. Actually, the LFO depth CV input affects only the pre-patched VCO pitch connection. To exercise similar control over filter cutoff or resonance modulation, you’ll need to draft in an external VCA.

A pair of white knobs controls the output level and feedback, the latter being the well-worn but always valid trick of feeding the entire output back into the filter. The results vary from subtle overdrive to completely unpredictable shrieking mayhem.

Already the Tonestar is a versatile synth eager to deliver classic leads, basses and space wibbles. However, there’s more... Naturally, you can override the regular signal path, patching in oscillator waveforms to obtain fizzy filter FM, for example, but some of the suggested connectivity is far less obvious. Routing an output to another output has been practised since stoners first came into contact with modular synths, but to my knowledge Studio Electronics are the first to coin a term for doing it officially. Their idea for ‘outs to outs’ (or O2O) arose from the discovery that ‘wrong’ patching doesn’t necessarily sound wrong — it can introduce unforeseen but desirable tonal changes, subtly or otherwise. Inputs to inputs are fair game too and equally unpredictable.

There was no manual at the time of writing, but Studio Electronics have produced a handy Tonestar Patching Guide that includes some must-try O2O examples. It’s fun to try out the impressions of high-pass, band-pass and notch filters, the tonal similarities achieved by patching oscillator waveforms into the filter output, or patching the square wave into the ADSR out. I should probably clarify that the results are ‘impressions of’; a whole load of extra filter modes don’t magically appear out of thin air. The effects are undeniably interesting, though, and when combined with high resonance or excesses of VCA feedback, you’ll encounter sounds quite atypical of a single VCO synth with a low-pass filter. One final point: although the outputs in your system will typically be protected from damage by resistors, beware the assumption that you can exploit this behaviour safely on every synth!

A healthy serving of traditional synthesis has found its way into this neat module, which may explain my rush of ’70s nostalgia. Even in a Eurorack system capable of infinite possibilities, sometimes you just want a big bass, plucky sequence or flowery solo that oozes vibrato. The Tonestar handles these duties effortlessly but can go much further. While semi-modular by nature, each element is readily accessible — you’ll definitely want to process other material through that wicked filter! Finally, by encouraging ‘nonsense’ connections, you gain new and unpredictable tonal mash-ups without the fear of frying circuitry. I reckon the name Tonestar is well-deserved.