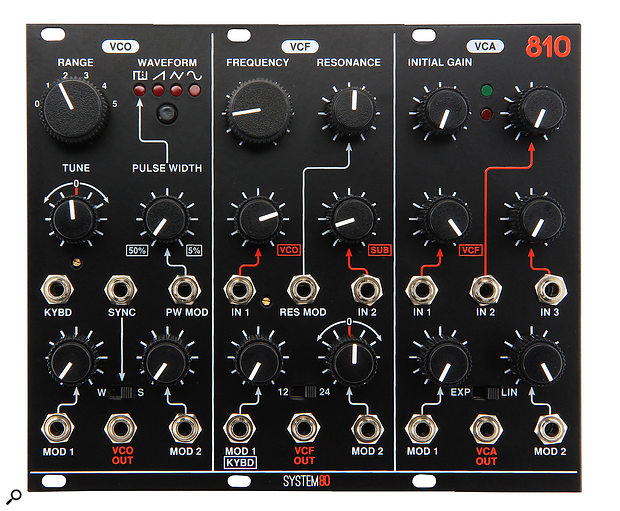 The black, white and orange livery of the 810 by System80 may give you some hint as to its influences. System80 are a company with a clear mission: to clone, reproduce, imitate or generally take influence from, some of Roland’s finer analogue circuitries.

The 810 comprises of a VCO, VCF and VCA, packed into a single 30HP module. Together they can be used as a single, Roland-flavoured analogue voice. It takes inspiration from various classic Roland designs from the late 1970s and early 1980s, including the System 700, System 100m and Jupiter 8, although it’s not a clone of any of them.

The VCO is a discrete oscillator which tracks over eight octaves using the 1V/oct input (simply labelled ‘kybd’, as was the fashion in the ’70s). A large range control offers octave transposing up to six octaves and there’s a fine tune control to get it perfect. There are two CV inputs with attenuators for exponential frequency modulation. A sync input allows the VCO to sync to an external signal, with switchable strong and weak modes, often called hard and soft sync by other manufacturers.

Pulse, sawtooth, triangle and sine waveforms are on offer, although only one can be active at once. The pulse waveform can be pulse-width modulated using a knob and corresponding CV input, with the width going from 50 percent to 5 percent. The PWM sound absolutely nails that classic Roland sound. In fact, the whole oscillator just sounds great on its own: juicy, fat, plump and very nostalgic. The ultimate test of an analogue oscillator, I’ve always thought, is whether it sounds good without a filter. The 810 passes that test with ease.

Moving on, we have a single low-pass filter, switchable between 12dB and 24dB responses. Low-pass is the only flavour here, but what a great filter it is. It sounds fantastic. There are two input jacks, each with a corresponding gain control. Rather helpfully, with no patch cable connected to the inputs, the oscillator and sub-oscillator are normalled to the two inputs. The filter self-resonates and has a CV input for resonance control. There are two frequency modulation inputs with attenuators, one unipolar and one bipolar. The unipolar input doubles up as a 1V/oct input when at its attenuator is at its fully clockwise position. Finally, there’s a single output for the mixed, filtered audio signal. The circuit design of the filter is based around the IR3109 quad OTA chip, which was found in a lot of classic Roland synths including many of the Junos, Jupiters and even the SH–101. It’s an excellent sounding filter with plenty of squelch and bite, and with the self-resonance you can coax all manner of excellent sci-fi sweeps, bleeps and laser sounds with little effort.

There are three input jacks on the VCA, each with its own level control. The filter output is normalled to the first input. Two modulation inputs with attenuators allow for CV control of the amplitude and there’s a switch to select between exponential and linear response. Drone enthusiasts will make good use of the Initial Gain control to open up the amplitude permanently. A couple of useful green and red LEDs indicate signal level or clipping.

All-in-one synth voice modules are quite popular and it’s easy to see why. They make great starting points for anyone beginning a modular journey. The 810 is no exception. Its sound will be a big draw for fans of the classic Roland analogues. The design is great. It’s easy to use thanks to the excellent signal flow legending on the front panel. You could easily use it without ever consulting the manual. Build quality is equally impressive; all potentiometers are panel mounted and everything feels solid.

There are many alternatives on the market. The Studio Electronics Tonestar 2600 (reviewed by Paul Nagle in SOS October 2016) will give you an ARP 2600 flavoured voice. Roland’s own 510 module (reviewed as part of the bigger System 500 review by Gordon Reid in SOS May 2019) will give you a VCO, VCF and VCA based on the Roland System 100m. Or if you have a thing for the SH‑101, the Intellijel Atlantis is worth a look too. The System80 810 is cheaper than any of these. It doesn’t have as many features as the Tonestar or Atlantis, but it doesn’t compromise on sound. If you’re looking for a synth voice module, it should definitely be on your shortlist.

DIY fans might also be interested to know that the 810 is open source hardware, meaning that anyone can download and use the design files. They can be found on System80’s website. Not being remotely solder-fingered myself, I can’t attest to the quality of the downloads.

In summary, the System80 810 is a no-nonsense, reasonably priced synth voice module with a very recognisable, nostalgic sound to it. It doesn’t compromise on features: two types of oscillator sync, multiple modulation inputs, triple inputs on the VCA and CV control over resonance are all features you won’t find on the average synth. Reassuringly familiar bass lines and leads fall from it with little effort. Add an envelope and an LFO module and you have a great little semi-modular, analogue monosynth that would not only offer a gentle learning curve for beginners, but also provide a solid analogue cornerstone for any modular setup. The 810 is a winner in my eyes... and ears.