The Roland Jupiter 6 was one of the first synths to feature MIDI, but of more interest to us here is its multi-mode filter, which was distinctly different to other Roland designs of the same era. When I heard there was to be an ‘inspired by’ Eurorack module, I was naturally keen to check it out against the Jupiter 6 sat here. System 80’s Jove has a modern replacement for the now-obsolete OTA (IR3109) used in the original and it has been given voltage control of resonance along with an extra two-pole low-pass mode somewhat reminiscent of the Jupiter 8’s. 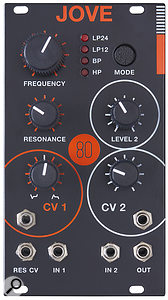 Size: 14HP. Current: +12V = 15mA, -12V = 10mA.Photo: derwellenreiter, BerlinMy first impressions were positive. The filter has two audio inputs, one of which has an attenuator, and two CV inputs (0-5V) for control of the cutoff frequency. One of these inputs is bi-polar and therefore ideal if you like to smoothly invert the effect of an envelope or other modulation source. The resonance CV input is not attenuated but its presence is welcome all the same.

The knobs are suitably Rolandish — they’re very firmly bolted down and feature a deliciously grippable knurl. OK, the Jupiter 6 had sliders, so sweeping the filter is a very different experience, but in a contest, I’d pick this large, smooth knob every time, regardless of whether it handles or tracks identically to a tired, crusty old slider.

Starting in four-pole low-pass mode, the filter range feels just right, with plenty of warm, deep bass available when required. The powerful and sometimes invasive resonance is easily recognisable too, and at a spread of resonance values, sweeping the cutoff from low to high, the Jove delivers beautifully and believably. Only the two-pole low-pass mode didn’t quite grab me in the same way, but it’s worth having as an alternative. Firing up the Jupiter 6 for direct comparison, I was instantly reminded that it’s overdue for a service! At high resonance it spits out jarring, ringing harmonics forever on the brink of distortion. In contrast, the Jove was much sweeter and more musical across its whole range, which I rate as a clear improvement.

Progressing through the selections, the Jove’s 12dB band-pass mode is both familiar and endearing. I suspect that resonant band-pass sweeps are part of the reason many old timers hang onto their JP6s. The high-pass filter also sizzles and slices exactly as it should. In comparisons using the same mixer and effects, the differences were insignificant to my ears. For simplicity, my tests involved a simple sawtooth arpeggio with tweaked cutoff and resonance, and as before, only the older filter’s abrasive maximum resonance identified it as the genuine article.

There isn’t much else to say other than to express gratitude that someone took the trouble to resurrect this odd but tasty topology. If you have a soft spot for the filter of a Jupiter 6 then — by Jove! — you’ll love this smooth, knobby version.