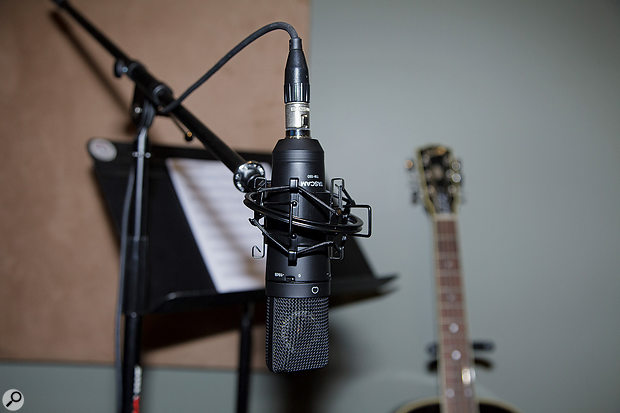 All mics in the TM series come with a range of accessories (the TM-180 is pictured).

Tascam’s mission to make recording accessible continues, with the launch of a new range of highly affordable microphones.

I have much to thank TEAC/Tascam for — it was their open-reel 3340S tape machine that first got me into multitrack recording back in the early 1970s, though I must confess that their microphones have never really popped up on my radar. Of course the musical equipment landscape now is very different from how it was in the 1970s, but Gibson (Tascam’s parent company since 2013) have invested a significant chunk into the Tascam empire, and these days Tascam offer a range of microphones, so their profile in the mic market might be about to change. We were sent a battery-powered end-fire mic plus two of their three more affordable studio models to review. This range is built in China, which accounts for its affordable pricing.

Powered by one AA battery, the TM-60 is a back-electret, cardioid pattern, end-fire mic designed for general-purpose use with applications on stage, in the studio or for podcasting and so on. It boasts a 50Hz to 18kHz frequency response and can handle SPLs of up to 126dB. Its sensitivity is quoted as -45dB ±3dB (0dB=1V/Pa at 1kHz) and the signal-to-noise ratio as 70dB, which is fine for close-miking but probably a bit on the noisy side for anything more distant. The frequency response graph reveals a broad presence hump rising from 2kHz and reaching a maximum at around 9kHz, which bodes well for intelligibility. 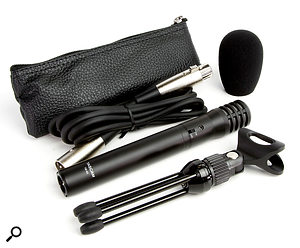 The TM-60 is a battery-powered cardioid mic.The mic ships with a mic clip (with thread adaptor), soft case, XLR cable, foam windscreen and desktop mic stand. Constructionally it feels substantial, it has a practical black finish and there’s a small slide switch to turn on the battery power. There’s no option to run it from conventional phantom power; you do get a signal if phantom powered with the battery switched off, but it is very noisy so clearly the mic is not designed to operate this way.

If I were to describe the sound as capable but unremarkable, I don’t think Tascam would be at all upset. At not much over £$50, the TM-60 is a good budget workhorse of a mic capable of rendering clear, well-balanced speech, though it did prove to have a pronounced proclivity for popping — especially if you read that phrase into it — so for any serious use an external popshield (rather than the included foam sock) is recommended. Its broad presence peak lends it good intelligibility and also helps add presence to miked acoustic instruments.

At the entry-level end of the studio mic range comes the general-purpose TM-80, a cardioid, side-address capacitor microphone utilising an 18mm back-electret capsule. Unfortunately we didn’t get one of these to try but, given its low price, decent tech spec and bundled accessories, it is probably worth looking at if you’re really on a tight budget.

Tascam’s TM-180 is a large-diaphragm, side-address capacitor microphone, with a fixed cardioid pattern and a sensitivity quoted as -35dB ±2dB (0dB=1V/Pa at 1kHz). Tascam recommend this model for vocal, acoustic guitar and wind instrument recording, though in reality it should cope with most acoustic instruments. It is built around a dual-diaphragm, 34mm-diameter, gold-coated, centre-terminated capsule.

The published response curve shows less of an upper-mid presence peak than with many mics but there is a noticeable hump between 9 and 10 kHz designed to add some ‘air’ to the sound while avoiding harshness. There’s a -10dB pad switch and a low-cut filter switch (which the response graph shows as coming in at around 120Hz). SPLs of up to 130dB can be accommodated with the pad switched off. Being a traditional externally polarised capsule, a full 48 Volts phantom power is required for operation, and a signal-to-noise ratio of 79dB is quoted along with a nominal 20Hz to 20kHz frequency response. Overall the mic measures 190mm in length with a diameter of 50mm. Both body and basket are finished in black. Looking inside reveals two tidy circuit boards, one hosting an audio transformer. The TM-180 ships in a hard plastic shell case with a shockmount and a soft case.

As the frequency response curve suggests, the mic does indeed have a slightly airy quality, which helps with vocal projection and it also adds definition to acoustic guitar. The overall impression is of a fairly natural but nicely open sound, and that hard-to-define sense of focus is better than you might expect for such an affordable microphone. There’s certainly not much to dislike at the price. 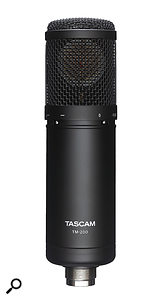 At the top of the range is the TM-280, which boasts a better signal-to-noise ratio (80dB) than its stablemates.Higher up the range, but still not much over £200, the TM-280 microphone comes in a package that includes a foam-lined camera case and a custom circular popshield that mounts directly to the included elastic shockmount cradle. As with the TM-180, there’s a 10dB pad and a low-cut filter, both switchable. The mic has a cylindrical body, and both the basket and body are finished in black.

On paper the response curve looks quite similar to that of the TM-180, with its 9-10 kHz lift. The capsule is again a dual-diaphragm, 34mm diameter affair utilising a centre-terminated, gold-coated diaphragm, but I can’t tell whether it is the same capsule as used in the TM-180 or not. While the nominal frequency response is again shown as 20Hz to 20kHz, this mic is the quietest of the models we were sent, with a signal-to-noise ratio of 80dB. The sensitivity figure is -36dB ±2dB (0dB=1V/Pa at 1kHz) and the SPL handling 135dB without the pad engaged. Peeking inside reveals two circuit boards populated with good-quality discrete components, but this time around there’s no transformer.

Despite the expectation that transformers deliver a warmer sound, the TM-280 sounded to me slightly more solid at the lower end of the vocal range while the gentle, airy high end was quite similar to that of the TM-180. Given its affordable nature, this mic produces great results on vocals and acoustic guitars, though, as ever, the caveat applies that the best vocal sound comes from searching out a mic that emphasises what is good about your voice while playing down your less desirable vocal characteristics.

While the affordable mic market is more crowded than Oxford Street in the run-up to Christmas, all of these mics perform well given their price. They handle vocals well and can also deliver a crisp acoustic guitar sound. I like the choice of a high ‘airy’ boost rather than a more obvious upper-mid presence peak for the TM-180 and TM-280, as it retains clarity without exaggerating harshness, and the TM-280, in particular, delivers a sense of weight and balance without sounding excessively ‘voiced’. So, yes, there are lots of mics to choose from but if you are on a budget, these Tascam microphones deserve a closer look.

Many manufacturers offer affordable mics so also look at MXL, sE, Aston, Prodipe, Samson, Audio-Technica and so on to see what’s available.

A set of affordable, well-engineered mics from an established name in audio, whose use of Chinese manufacturing has kept the price down.