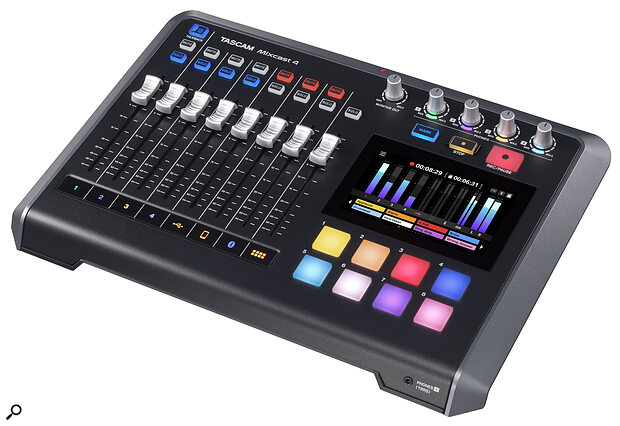 Can the Mixcast 4 offer podcast producers something its rivals can’t?

Podcasting is big business now and many manufacturers have trained their sights on it, with various recorders, interfaces, mics and apps being presented as perfect for podcasters. Fewer have designed new hardware from the ground up for podcast production, though. Rode were arguably the first with their RodeCaster Pro, which launched back in 2018 but was treated to a significant firmware update before my review in SOS June 2020. Zoom seem to me to have been their only strong and direct competition. I reviewed their LiveTrak L‑8 in SOS January 2021 and we’ll be testing their PodTrak range soon too.

Those devices all marry elements of conventional music/broadcast mixing desks with a multitrack SD recorder and USB audio interface, but also add several features specifically intended for podcast production: sample trigger pads, for example, ‘mix‑minus’ TRRS/Bluetooth inputs and, typically, as many headphone outs as there are mic inputs. They deliberately simplify the recording workflow so as to avoid intimidating novice recordists, and to that end you’ll typically find things like touchscreens and a preset‑based approach to configuring phantom power, mic gain, EQ and dynamics processing. They’re also intended to be portable. You should pretty much be able to plug in some mics and headphones, and optionally your phone or computer and speakers, and hit Record.

Podcast workstations, then, have plenty of overlap with Tascam’s Portastudio concept and the company’s recent Model 12 and 24 mixers, which double up as audio interfaces and recorders. So it was almost inevitable that Tascam would join the podcast party...

Called the Mixcast 4, their first podcast workstation sounds and feels typically and reassuringly Tascam. There are four low‑noise mic preamps, several other analogue and digital inputs and four headphone amps, each with ample clean gain and its own level knob. The case is plastic but it’s solidly built, and the whole thing weighs enough to stay securely in place on a desktop without being so hefty as to inhibit portability. While we’re on the subject of portability, there’s an optional carry case but note that there’s no provision for battery or USB power, despite there being a USB‑C port on the rear; you must use the provided 12V DC PSU, a universal wall‑wart type with screw‑locking connector.

While you won’t find every feature that the Rode and Zoom devices offer, most are accounted for and the Mixcast 4 boasts some advantages of its own too. Like the L‑8 and the RodeCaster Pro, it can be used standalone to record multitrack to an SD card (it accepts full‑size SD cards of class 10 or higher and is compatible with the SD, SDHC or SDXC standards) or, connected by USB (2.0, via a USB‑C cable) to a computer, phone or tablet, as a 14‑in/2‑out audio interface, which is class compliant for Mac OS, iOS and Android, and there are ASIO drivers for Windows. There’s also a free‑to‑download Mac/Windows/iOS editing app called Tascam Podcast Editor, whose learning curve is practically non‑existent and for many prospective users this will be welcome. Actually, the manual suggests it is available for Mac OS Catalina and above, iOS/iPadOS 13 and higher, Windows 10 and above, and Android 10 and up. But I couldn’t find the Android version on the Play Store, and a hunt around Tascam’s website before going to press suggests this version remains in the pipeline. On the plus side, I installed it on Mojave, an earlier version of Mac OS than those that are officially supported, and it worked fine. 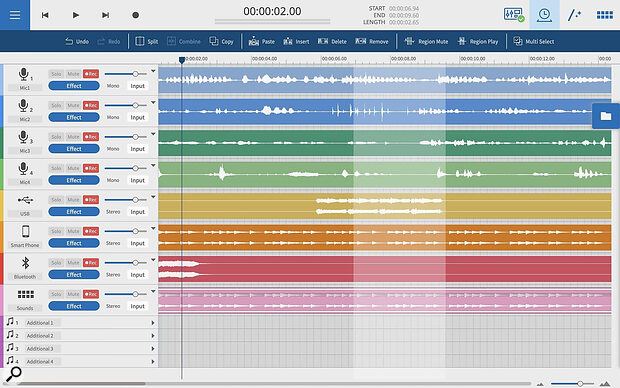 Tascam’s Podcast Editor is free to download and offers everything you need to make quick edits, as well as a potentially useful automatic balancing function.

Returning to the hardware, eight long‑throw faders give you ample control over channel playback levels and, with the other hardware controls each being assigned to a single purpose, the device has a spacious, intuitive, hands‑on feel. Along with the faders, you’ll find backlit rubber buttons for channel solos and mutes, talkback, basic transport control and sample pads, as well as five knobs for the stereo monitor out and four headphone outs. Clever use of coloured lighting aids navigation; lights beneath the headphone level knobs, for example, are a lovely touch.

The deeper functions that you’re less likely to need while actually recording are accessed using a large colour touchscreen, which occupies broadly the same space (slightly shorter, slightly wider) as my Samsung Galaxy S9 phone. Operation is very reminiscent of interacting with such a device: most functions are accessed using icons/buttons, there’s little menu diving or scrolling to contend with, and there’s never any information overload. A clear advantage of the touchscreen approach is that Tascam should have no obstacles to developing this device further. Indeed, some firmware updates have already been released. I installed v1.21 and while the process did take a few minutes it was trivially easy.