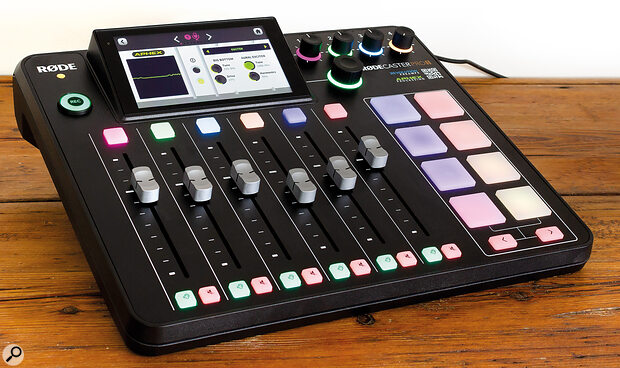 The original podcast production station has grown up — and it’s not just for podcasters!

Rode’s original RodeCaster Pro was such a groundbreaking product that we reviewed it twice: first in 2019 and subsequently, after a significant firmware update, in 2020. The innovative Australians haven’t rested on their laurels, though: the RodeCaster Pro II (abbreviated to RP II from herein) is a substantial revamp with both hardware and software changes. It’s good too — in fact, I reckon it’s the best ‘podcast workstation’ currently available. There’s a huge amount going on here, and I can’t detail it all but I’ll explore lots of the features that should make it appeal to podcasters, streamers and musicians alike.

At a first glance, the RP II looks similar to its predecessor (if it ain’t broke, don’t fix it!) but there are changes and there’s a more powerful processor inside too. The sleek desktop form factor remains, the plastic case is robust enough to inspire confidence, and Goldilocks would love the weight: sufficient heft to stay put on a desk, yet not so heavy as to inhibit portability.

On the top panel are five knobs: a pot each for four headphone amps and an encoder to control various parameters on the touchscreen as well as the master output level. At 5.5 inches, this screen is bigger than the older model’s and broadly ‘smartphone sized’. Great use of coloured lighting on the hardware is mirrored in the on‑screen information, and the brightness of lights, screen or both can be set anywhere from a dim glow to... shall we say Sydney Harbour Bridge at midnight on New Year’s Eve? You can set the display/lights to auto‑dim after a specified time or period of inactivity, and can switch on haptic feedback for a tap or long‑press.

The eight rubberised Smart Pads are now accompanied by two bank‑scrolling buttons, which means less menu diving. There are six hardware channel strips, each with a long‑throw fader, a select button and mute/solo buttons. The older model had eight such channels, but you’re not at a disadvantage here: a few virtual channels can be controlled using the screen and encoder, and any source can be assigned to any physical or virtual channel with a drag‑and‑drop.

Around the back is an RJ45 Ethernet socket, and you can choose this or Wi‑Fi to connect to a router for firmware updates. The RP II checks for updates on startup and Rode stressed to me that updateability is a big part of their plan. Updates have come quickly to date, and another significant one to customise the USB output mixes was imminent as we went to press. A micro SD card slot is joined by no fewer than three USB‑C sockets! One, by the on/off switch, is for power (a 15V, 2A external switch‑mode supply is included). The other two are for connection to computers and mobile devices, or hosting USB drives (you can record standalone to micro SD or USB media).

When USB port 1 is connected to a Mac/Windows/Android device, the device sees two audio interface drivers: one a multi‑channel (16‑in/2‑out) interface, the other a Chat version (a 2‑in/2‑out mix‑minus interface for use with phone calls and apps such as Zoom). The second port has its own driver (Mac/Win/Android/iOS) and presents as a 2‑in/2‑out interface with switchable mix‑minus facility. If this sounds puzzling, don’t worry: it’s illustrated very clearly in the manual. The unique dual‑port arrangement allows the RP II to connect to two computers/tablets/phones over USB simultaneously. You have the option on the hardware and in the downloadable Rode Central Mac/Win app to record the pre‑ or post‑processing/fader signal too and, neatly, you can also set up two‑way MIDI communication, and use the RP II’s Rec button to initiate recording on your DAW. Testing it with my MacBook Pro running Reaper 6 on Monterey and an Android phone, it all worked as described.

Also on the rear are four analogue mono mic/line/instrument inputs on Neutrik Combo XLRs, and six quarter‑inch jacks which deliver a balanced line‑level stereo output and an unbalanced stereo feed from the four headphone amps. A Bluetooth converter completes the list of input sources. By default, the four analogue inputs are on faders 1‑4, Bluetooth and the Smart Pads’ sample playback occupy faders 5 and 6, and the three USB signals appear on virtual channels 7, 8 and 9 but, as I said, these can be reassigned easily.

Unusually, the RodeCaster Pro II has three USB ports — one for power, and two more which allow it to be used as an audio interface with two connected computers/phones simultaneously.