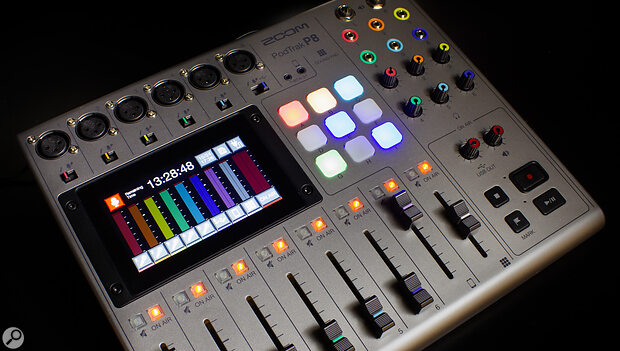 We get hands‑on with Zoom’s new dedicated podcast recorder.

Podcasting is now a very big business, and the market for podcast production tools has really heated up in recent years. As well as the various audio interfaces, USB mics and apps that have been targeted at podcasters, there have now been several standalone devices which aim to put almost everything a podcast producer needs in a neat and convenient package. I recently reviewed Rode’s revamped RodeCaster Pro II (SOS August 2022), for example, and a couple of months earlier looked at Tascam’s Mixcast 4. While such devices can, if desired, be used for other recording and production purposes — those mentioned double up as standalone multitrack recorders and USB audio interfaces — they also offer a number of broadcast‑style features, including multiple headphone outs, connectivity for phone and VOIP calls, and sample pads, for live DJ‑style triggering of sound effects and, potentially, adverts. They also attempt to present a less‑daunting interface than a typical recording console, for example by using presets to manage things like mic preamp gain and phantom power.

Japanese audio electronics boffins Zoom have long had a foothold in this market with their R and LiveTrak L ranges, which combine multi‑channel mixers with audio interfacing and standalone recording capability. Their LiveTrak L‑8, for example, which I reviewed back in SOS January 2021, gained an enthusiastic following amongst podcast producers. But none were devices designed specifically and solely with the podcast market in mind. So while the LiveTrak L‑8 did offer useful podcasting features, and seasoned recording types won’t have had any issues using it (I loved it!), many amateur podcasters would, I imagine, have found some features superfluous or potentially complicated, while others might have found the number of headphone outputs lacking, or wished for more obvious visual clues to help them run multi‑user sessions.

For such users, Zoom have since created a couple of dedicated podcast production stations: the PodTrak P8 reviewed here, and a smaller sibling, the P4. The PodTrak P8 has plenty in common with the LiveTrak L‑8 (which remains available), but there are plenty of differences too. It’s a similar sort of size (large enough that the control layout feels suitably spacious; small enough to be easily portable). It has six mic preamps, and can run off the supplied mains AC to 5V DC PSU or USB power (whether that be from a computer’s USB port, a wall‑wart or an external USB power pack). But it can also be powered by four AA batteries, if you prefer, for up to 1.5 or 2 hours (Zoom’s published specs are inconsistent on this point, and I didn’t fancy burning my last set of batteries to discover which figure was correct!). There are more headphone outputs: six to the L‑8’s four, matching the number of mic input channels, and each has its own level knob. So you’re able to record six people in conversation in the same room, with each having their own mic and able to set their headphone levels to taste.

The P8 has nine sound pads (each with four virtual banks) compared with the L‑8’s six, and this time they’re treated to their own, dedicated stereo mixer channel. One limitation of the L‑8 is that its sound pads share a stereo channel with line, phone and USB‑C inputs. Instead, on the P8, mic channel 6 doubles up as the USB channel. The P8 is compatible with Mac, Windows, iOS or Android devices, and the USB‑C port allows you to include phone calls or an audio feed to/from VOIP or video‑conference apps (such as Zoom — no relation!) in your podcasts; to use the P8 as a 2‑in/2‑out audio interface; or for file transfer. An adjacent TRRS mini‑jack socket provides a two‑way connection for a smartphone or similar, or, with power supplied by a smaller socket next to it, Zoom’s separately available BTA‑2 Bluetooth adaptor. This TRRS (or potentially Bluetooth) input has its own stereo channel and level fader. As on most such devices, there’s a ‘mix‑minus’ feature to prevent feedback/echoes on any USB‑connected device.

The SD card slot is on the rear, along with a USB‑C connector (for power and data connections) and a power inlet for the included adaptor — though the P8 can also run off AA batteries if you wish.

The main stereo outputs are on quarter‑inch TRS jacks this time, and the headphones on mini‑jacks, and the output level is set using a knob in the bottom right‑hand ‘master’ section. Here, you’ll also find a knob for the USB stereo output level, as well as four transport buttons. A large record button, whose big red dot and protective surround (to prevent accidental presses) make its function unmistakable, is joined by a button each for stop, play/pause, and to add markers while recording (helpful to flag up issues that need attention in post production).

The casing is a slightly metallic mid‑grey colour and the various features hosted on its top panel are helpfully colour‑coded, with each channel’s physical control set having its...