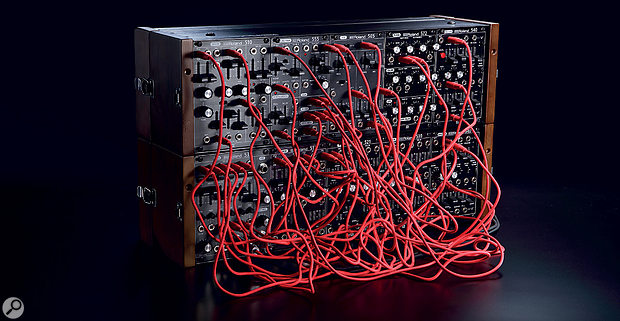 As rare and expensive as it is desirable, Roland's celebrated modular system has always been out of reach for most of us, but now the company have recreated it for Eurorack.

Forty years ago Roland released their second and, until recently, last analogue modular synthesizer. Called the System 100M (where the 'M' differentiated it from the earlier System 100, which was patchable but not modular) this was a superb system, smaller and in many ways neater than the giant American modular synths of the late '60s and early '70s. It sold in reasonable numbers, but its popularity didn't really take off until after production had ceased, whereupon it seemed that devotees entered a competition to see who could cover the largest walls with its modules.

Only six such modules were released when the 100M was launched in 1979, but these comprised all of the major building blocks of a traditional analogue monosynth. When inserted into their dedicated 190 (three-module) or 191J (five-module) cases they provided access to top‑quality modular synthesis at a fraction of the price of previous systems, not least because each module contained multiple sub-modules so you needed fewer of them. Mind you, they were still far from cheap — a single module could cost around the same price as, say, a Moog Prodigy or a Korg MS‑10 — but, if you combined one of each of the six in two 190 cases you had three oscillators, five filters, three programmable VCAs, a brace of ADSR contour generators, two LFOs, a noise generator, a Sample&Hold and a ring modulator. This wasn't a trivial system and, as funds allowed, it could grow larger and more powerful as you chose.

The following year, Roland added four more modules to the family and then, in 1983, released the final three before deleting the whole range just two years later. Five further modules were prototyped but, for reasons unbeknown to me, these were never put into production.

For the next three decades, Roland eschewed the world of analogue modular synthesis. But perhaps the increasing popularity of the Eurorack format proved too much of a lure because, in 2015, the company collaborated with American boutique manufacturer Malekko Heavy Industry to launch five modules that echoed five of the original six 100M modules. Called the System 500, these could be purchased individually or as a so-called 'Complete Set' mounted in Roland's new SYR-E84 Eurorack case.

Although the stylish new modules were designed to recall the look and feel of the Roland System 700, the unobtainium Japanese behemoth from 1976, the similarities between the System 500 and the 100M were — at least at first sight — remarkable. Despite replacing the 150 ring modulator/noise/S&H/LFO utility module with the 572 phaser/delay/gate delay/LFO module, the other four — the 512, 521, 530 and 540 modules from 2015 and the 112, 121, 130, and 140 modules from 1979 — could be identified with one another. Nevertheless, when I placed a Complete Set next to my 100M, I was surprised by the number of differences between them.

Let's start with the 512 dual‑oscillator module. Like its forebear, this generates three waveforms (sawtooth, triangle, or pulse/PWM) per oscillator, has three mixable pitch CV inputs per oscillator, and offers both hard and soft sync. However, unlike the oscillators in the 112, which can only output one waveform at a time, the oscillators in the 512 give you access to all three waves simultaneously. On the other hand, the 112 allows you to adjust the gain of all six of its CV inputs (ie. the tracking) between zero and 100 percent, whereas the 512 has a fixed 100 percent tracking ratio for two of its six CV inputs. Sure, the chances are that you will want your oscillators to track the keyboard 1:1 for many of your sounds, but it still seems a strange omission to me, albeit one that reduces the cost a little.

Moving on, the dual LP/HP filter pairs in the 521 module are modelled upon those of the 121, with three mixable audio inputs for each pair and three mixable CV inputs for each of the low-pass filters, but they again lack gain controls for their keyboard CV inputs. Furthermore, where the 121 offers four settings of increasing cutoff frequency — Off, 1, 2 and 3 — for each of its high-pass filters, the 521 offers just three settings — Off, 1 and 2. Again, it's an unexpected change, but perhaps three-position switches are smaller and cheaper than four-positions switches.

The 540 and 140 dual ADSR contour/LFO modules again exhibit great similarities, but the contours in the 540 now offer fast and slow settings plus a cyclic mode that allows you to use them as unusual LFOs. On the other hand, those in the 140 offer a Trig+Gate (multi-triggering) response as well as the legato Gate (single-triggering) response, which is desirable for many types of sound. Elsewhere in the same modules, the 540's LFO now allows you to tap every one of its five waveforms simultaneously and it offers switches that determine whether the LFO waveform and LFO delay are reset by contours 1 or 2 (or neither). On the other hand, the 140 module has a 1/10th amplitude switch for the LFO, which makes it easier to programme delicate modulations.

Turning to the 530 and 130 dual‑VCA modules, these are again similar, with three mixable audio inputs and three mixable CV inputs per VCA, linear and exponential responses, plus an independent Initial Level for each. Here, the differences lie in their outputs. Each module offers four, but whereas the 130 offers high‑ and low‑level signals for each of the VCAs, the 530 offers Out and Sum outputs for each VCA, the latter of which, as the name implies, outputs the sum of both VCAs.

To test the two sets of these four modules, I used the multiples in my 191J case to connect a suitable controller keyboard — in this case, a Roland SH‑101 seemed appropriate — to both, and programmed a range of sounds. Staying within the bounds of their shared functionality, I was impressed by the accuracy with which the System 500 recreated the sound of the 100M. The vintage synth's wide keyboard tracking and stability have been retained, as has the quality of its sounds. Sure, I could hunt for (and discover) differences but, whether programming bass or lead patches, conventional percussion, orchestral imitations, or when torturing the oscillators, filters and amplifiers, I found that I could swap one system for the other. Don't misunderstand me — I'm not suggesting that they always sounded identical but that, even when they didn't, the underlying character and timbre was the same. Despite the functional differences, there's no question that the System 500 has the 'Roland sound'.

Next I turned to the 572 phaser/delay/gate delay/LFO provided in the System 500 Complete Set. The 172 module that inspired it was released in 1980 and therefore wasn't part of the original 100M configuration, but it was a fascinating piece of kit that now sells on the second-hand market for ridiculous sums of money. Again, the 572 imitates its predecessor, but with two meaningful differences. These are the additions of independent Mix (wet/dry) controls in its rather noisy phaser and its very short, even noisier audio delay sections, plus external CV inputs to modulate these. Replacing the Effect On/Off switches of the original module, these are excellent additions, and you would need additional modules and a lot of patching to obtain the same results without them. 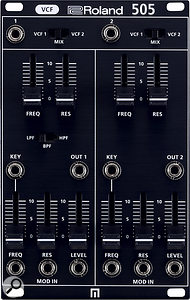 The 505 dual‑VCF module.Now it was time to look at the second batch of System 500 modules, starting with the 505 dual multimode filter. This has no equivalent in the System 100M, but I suspect that it's going to be of great interest to a lot of people because it's based upon the filter section of the Roland SH‑5 monosynth. It therefore contains two filters: a switchable LP/BP/HP filter with the usual frequency and resonance controls, plus CV inputs for frequency, resonance and level; plus a band-pass filter with the same set of controls. There are independent inputs for each, and the two outputs can carry the signals from either filter or a mix of both. 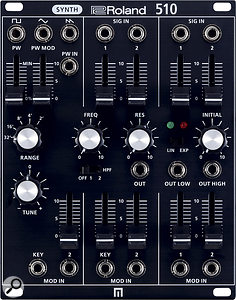 The 510 VCO/VCF/VCA module.As you would expect, the 510 VCO/VCF/VCA is equivalent to the 110 module, which comprised the audio signal path of a basic synthesizer voice; you just needed to add a 140 with its dual contour generators and LFO to obtain musically meaningful results. (With a 110, a 140 and a 150 in a 190 case, you had a complete single-voice synthesizer, and it was this combination that made it practical to use the 100M for polyphonic synthesis. With four such racks, a Roland 184 keyboard capable of generating four CV+gate pairs, plus a suitable mixer, you had a four-voice polysynth similar in concept to the Oberheim 4-Voice but more flexible, more stable and with a very different sound.) Anyway... returning to the 510, the new module is again a close approximation of the vintage one, but with a number of well‑chosen improvements. Again, all three oscillator waveforms are available simultaneously on the 510 whereas you had to switch between them on the 110, and the filter section is also enhanced, with a switchable (Off, 1, 2) high-pass filter in addition to the programmable low-pass filter. There's even an output from the filter section that can be patched to the outside world, whereas the filter in the 110 was only connected to its own VCA section. Oh yes... and the VCA on the 510 is itself upgraded with a switch to choose between linear and exponential responses. I like this module a lot and, were I specifying a Eurorack system for a friend, I would be very tempted to include at least one of these. 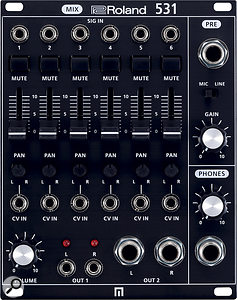 The 531 six-channel mixer.The penultimate System 500 module is the 531 mixer, which updates the 131 of the vintage system. The differences here are perhaps the most obvious of all the modules. Whereas the 131 offered four input channels with left/right panning, mono and stereo outputs, a master volume control, a headphones output with an independent level control, and a 220Hz/440Hz/880Hz tuning oscillator, the 531 adds two further channels, adds mute buttons to all of them, adds CV control over the pan for each channel, and adds a separate, preamplified mic/line input that directs a microphone input to channel 6, or a stereo line input to channels 5 and 6. However, it loses the tuning oscillator, which is a shame because the 131 was the only module in the 100M that allowed you to tune the synth without reference to other instruments. 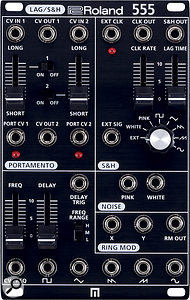 The 555 RM/noise/S&H/LFO/slew module.Finally, we come to the 555 'utility module', which comprises a ring modulator, a noise generator, a Sample & Hold, an LFO (that, amongst other things, provides the signal from which the sample in the S&H is derived) and two slew generators. The ring‑modulation facilities are the same as before, but the noise generator is a small step backward, with just a single pair of outputs for white and pink noise, whereas the 150 offered two of each. The S&H facilities are largely the same, but it's when we reach the LFO section that things get interesting because, like the LFO in the 540, you have access to all five waveforms simultaneously. Furthermore, a new input — Delay Trigger — allows you to trigger a swell in the LFO's amplitude from zero to its maximum in a time determined by the Delay fader. (On the 150, this trigger is internally patched to the keyboard trigger.) Nonetheless, the 555 again lacks the 1/10th amplitude switch found on the 150. The last section on the 555 doesn't exist in the 150 at all — it's derived from a separate System 100M module called the 165. It's a pair of slew generators with independent CV control over the slew times, and very useful it is too.