Could this crafty three-in-one PA and lighting system save you both time and money?

A couple of years ago I was talking to PA manufacturers, trying to promote the idea of a speaker such as this one, and Paul Belcher, the main designer at Studiomaster, was the only engineer to take up the challenge. My pitch was that, since many of us now play live in small pubs and clubs where there’s barely enough room for the performers, let alone the gear, wouldn’t it make sense to build the PA speakers, some basic foldback monitoring and LED stage lighting into a single, compact cabinet? That would cut down on the number of stands and amount of cabling required, making for less clutter and a faster setup time.

Studiomaster’s first product of this type to be unveiled was the Starlight 15, but this 12-inch version looks like a more practical proposition for smaller venues, measuring approximately 400 x 340 x 600 mm and weighing 22.7kg. Personally I’d also like to see a model in the range with 10-inch or 2x8-inch speakers, as that seems an ideal size for many smaller pub gigs — but let’s see what the Starlight 12 is all about first. 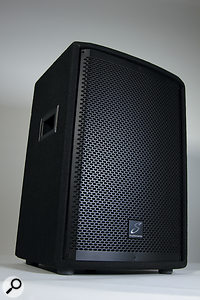 Manufactured in China to keep the price as low as possible, the front-ported cabinet is made from 15mm MDF and has a very neatly applied fuzzy fabric covering as well as a robust, powder-coated metal front grille and inset side handles. A standard ‘top-hat’ pole-mount socket is fitted to the bottom face. Pretty standard so far then. A 12-inch woofer with a 60mm voice coil sits below a 1.35-inch horn-loaded compression driver, the horn having a one-inch throat and a 60 x 90 degree dispersion. The drivers are fed 250W of amplifier power via a 4kHz passive crossover. The speakers can operate from 230 or 115 Volt supplies as set by a selector switch.

A further 50W amplifier is present to drive a four-inch monitor speaker, which is sited in its own internal sealed enclosure and has a limited 200Hz to 8kHz bandwidth — which is similar to many stand-alone mini monitors. There’s no need for the monitor to go any lower than 200Hz, as the low-end spill from the main speakers fills in the necessary bass end. This speaker, which also has a metal protective grille, is fitted into the angled side of the cabinet along with a recessed strip of six high-intensity, multi-colour LED stage lights fed from an internal lighting controller. The cabinet side is angled at around 30 degrees, so gives the best lighting and monitor coverage when the performers are behind, but not too far behind, the speakers. In a typical small venue this might only be a couple of feet or so — move much further back and you start to lose coverage, unless you angle the speakers in slightly. Clearly this layout necessitates the speakers being built as mirror-image pairs so that the monitors and lights point inwards towards the performers.

Let There Be Light

Integral lenses give the LEDs a 45-degree coverage angle, and the on-board lighting controller offers 13 programmes comprising seven static colours and six auto-changing, cross-fading or sound-activated colour changes. The user can adjust the overall brightness and speed of change for the relevant programmes. 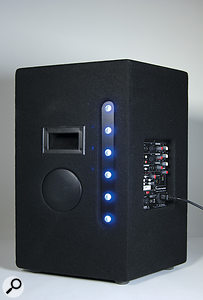 The integral LED lighting column and, to its left, the four-inch monitor speaker.

When the speakers are set up on stands, the monitors are at a nominal ear height. The monitor source can be from the main speaker feed, or you can plug in a feed from a mixing console’s aux sends if you need a custom monitor mix. All the controls and connections are on the recessed rear panel. The external monitor input is on a quarter-inch jack, and the monitor speaker also has its own level control.

A simple two-channel mixer section serves the input section, with separate level controls for the inputs and master, an overall three-band EQ and a balanced XLR link-output connector to feed an additional powered speaker. There’s one mic/line channel (XLR and jack inputs, respectively), and one line-only channel that can accept either an XLR or a pair of RCA phono connectors (the latter are summed to mono for connecting MP3 players and the like). At 30dB mic gain the noise figure is -87dB, and the circuitry bandwidth extends from 40Hz to 30kHz.

A series of push buttons on the same recessed panel select the lighting programme (or turn the lighting off), set the light brightness (static modes only) and set the colour-change speed. There’s also a sensitivity control for those programmes that employ a sound-to-light mode. Status LEDs indicate the lighting mode, power on and also monitor peak levels.

Given that these are not expensive speakers, the sound quality is actually pretty good, though, as is often the case with smaller ported PA speakers, the bass end can get a bit flabby when playing back full-range material at any volume. That’s where the three-band EQ comes in handy, as the lows can be tamed very easily, and having EQ also allows for some adjustment to compensate for speaker placement and room acoustics. If you want to run a techno show then add a sub, but for voice, the speakers cut through well with good intelligibility, and again the EQ can help fine-tune the result — though that 4kHz crossover frequency does mean that the woofers are approaching the end of their HF comfort zone. That might be another reason to add a 10-inch version to the range. More money will buy you a more ‘hi-fi’ sound, but I’ve always been impressed by Studiomaster’s ability to squeeze the best performance possible out of a given budget, and these speakers don’t disappoint in that respect. They’re also pretty loud, with an SPL rating of 124dB. 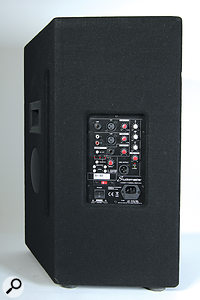 If you listen to the monitor speaker in isolation it sounds predictably mid-heavy and ‘squawky’, but that’s not how you’d hear it in a real gig. The trick is to turn it up until it restores clarity to what is spilling back from the front, at which point the tonal balance you hear when performing comes pretty close to what the audience hear out front. In a small venue where there’s no space for conventional monitors, having what amounts to built-in side fills is a big plus.

Of the lighting options I found the auto colour fading set to a slow speed to be most useful. It isn’t too flickery or flashy, as the sound-to-light versions can be sometimes, it is less obtrusive than straight colour switching, and less boring than static colours. Considering there are only six LEDs the lighting is incredibly bright and it goes without saying that this is infinitely better than relying on the pub’s strip light. In a perfect world the lights and monitor would be on swivels allowing the user to aim them as appropriate, but from an engineering standpoint this would have resulted in a far more costly product. Studiomaster’s design here is clearly pragmatic, and because of that they’ve managed to offer a great deal of functionality for no more than you’d expect to pay for a standard powered speaker. There’s also a slightly cheaper version (Starlight 12L) that retains the lights and dispenses with the monitoring if you don’t need it.

Our real-world test was carried out at a medium-sized pub gig with a four-piece band, using typical backline and a full drum kit. We decided to use a mirror pair of Starlights for PA, carrying mainly vocals, and also as the sole source of monitoring. The vocal level was plenty high enough to be heard over the backline and resistance to feedback also turned out to be better than expected, even with the monitors turned well up. Trusted ears in the audience said the vocal clarity was fine, while the band members were very happy with the cross-fill monitoring, as everybody could hear the vocals clearly. Not only did this avoid separate monitoring with all the extra cabling that entails, but it really made setting up very simple and quick. There were some protests from band members that the LED lighting was a bit like having laser eye surgery, though turning the cabinets slightly helped avoid having the LEDs shining directly into anyone’s eyes. When I told the band members what the speakers cost they were very surprised, as they expected them to cost considerably more. They also thought the idea of having everything built into one box was a good one, so my madcap concept would seem to be vindicated!

Currently there is nothing else that combines the roles of main PA, monitors and lighting in one — the only alternative is to buy separate boxes for each.

I’m pleased that somebody followed up on this ‘all in one’ idea, and happier still that it comes in such an affordable form! Maybe the idea will catch on...