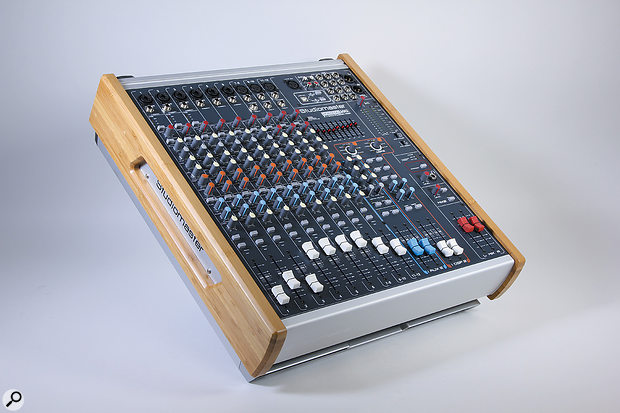 Studiomaster often seem to get overlooked when it comes to quality PA gear, but I used one of their powered mixers plus a couple of their speakers for many years and always got good results. I eventually sold the system on, but even now it continues to give reliable service to the band that bought it. Since then, Studiomaster have become part of the Soundking group, which have provided both investment and cost-effective Chinese manufacturing, though the UK design team are still the same. Their new Horizon mixer range comes in both powered and non-powered versions, with either 12 or 20 inputs, building on the concept of the original 1990s Horizon models but with added features and new low-noise mic preamp circuitry. All models come with a footswitch and a flexible 12V LED goose-neck light, and the 12-input model also includes a 19-inch rackmounting kit. An optional fabric carry bag is available for the 12-input models, with a optional flight case available for the 20-input models. The active 12-channel version is reviewed here.

The Horizon 2012 is a 12-input desk that can be used free standing or bolted into a 19-inch rack. As is common with many of today's mixers, 12 inputs doesn't mean 12 mic preamps — there are in fact six mono mic/line channels plus three stereo inputs, which can also double as mono mic inputs — meaning that of the 12-input total, up to nine mics can be connected.

Weight has been kept down by the use of aluminium panels and extrusions rather than all-steel construction, while the end cheeks are made from laminated bamboo, which I have to say looks rather good. A strip of white LEDs illuminates the top edge of the desk, but it isn't really helpful in illuminating the controls — you'll need to plug in the gooseneck lamp for that.

I've Got The Power

A two-channel amplifier supplies up to 1kW per channel into 4Ω, and is powered via a switched-mode PSU with a suitably quiet cooling fan. Rather than go the Pulse Width Modulation, Class-D amplifier route for the amp, Studiomaster use a circuit topology called Class G. This retains the old-school benefits of Class-AB circuitry, but adds power-supply rail switching to increase efficiency and so reduce heat. Essentially the amplifier runs at a lower voltage where possible, automatically switching briefly to a higher supply voltage to accommodate peaks as needed.

The two amplifiers can be switched to provide normal stereo operation, or there's a split mode, where a mono mix is fed to the left output and an aux/monitor feed (from aux 1) to the right output. Alternatively, the amp can be set to power the monitors (auxes 1 and 2) only. A stereo nine-band graphic equaliser operates on the balanced, mix-output XLRs. Neutrik Speakon connectors mounted on the back panel carry the amplifier outputs. One neat consideration is that the amplifier power can be switched down to 40 or 15 percent of their full power, which means you can drive smaller speakers without the risk of overdriving them.

Three of the six mono mic/line input channels, which use Combi input connectors, include Studiomaster's own VMS optical compressor (derived from the Studiomaster Vocal Management System), and all six mic/line channels have gain trim, an 80Hz low-cut filter, a three-band EQ with swept mid (100Hz to 8kHz), a TRS jack insert point and four auxiliary sends. Two of these sends are post-fader and route directly to the two DSP effects engines, though line outs are available for these if you prefer to use your own effects. The remaining two can be switched independently to pre- or post-fader operation. A button switches the VMS compressors in or out and there's a four-LED gain-reduction meter, though there are no separate compressor controls so you have to juggle the input gain trim to get the desired amount of compression. I found that gentle amounts of compression (with one gain-reduction LED flashing) worked well, but much more started to sound a bit fierce, with noticeable pumping of any spill and background sounds. It also pays to be aware that adding any form of mic compression in a live environment risks aggravating acoustic feedback.

Phantom power may be applied separately to two banks of six channels (1-6 and 7-12), via a pair of rocker switches on the rear panel. All the connectors, other than the Speakons and power, are located on the top panel, where you'll also find separate LED metering for the mixer signal level and the power-amp level.

The three mono/stereo channels (7-12) can each accommodate stereo line inputs on jacks or a mono XLR mic input, which means a maximum of nine mic inputs is available if you don't need any of the stereo line inputs. These channels have more or less the same features as the other channels, other than having no insert points and a fixed 2.5kHz mid-frequency in the EQ section. All channels have mute and PFL buttons (along with status LEDs), plus dual green and red signal present/peak LEDs. Soloed signals are shown on the meters and are also audible via the headphone output, which has its own level control in the master section and normally follows the main mix. Faders are all 60mm types, with rotary pan controls for all the mono channels and balance controls for the stereo channels. 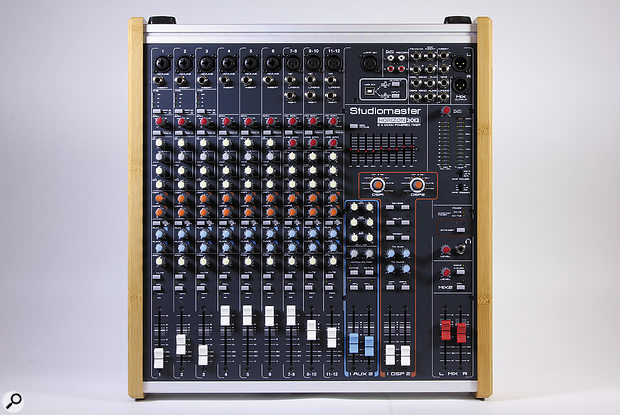 All of the audio connections reside on the top panel, apart from the amplifier Speakon outputs, which sit around the back.

An on-board effects section provides dual DSP-powered reverbs and delays suitable for live performance. Each processor offers a choice of eight preset reverb effects or a fully variable delay, served by auxes 3 and 4. The idea seems to be to provide a limited number of useful effects rather than a huge number of presets, most of which would never get used — so there are no telephone emulations or cartoon voices here!

Effects can also be mixed into either monitor send (auxes 1 and 2), and there are separate bypass buttons for each effect. A pair of footswitch jacks allows independent remote switching of the two DSP sections, but if only one footswitch is plugged in then it switches them both — a very practical arrangement. Both effects engines offer the same eight preset effect choices, selected via the DSP 1 and DSP 2 knobs, and are independently switchable between delay and reverb. Switching is done via the two vertical rows of buttons below designated Reverb, Delay and Regeneration (delay feedback). In the reverb category, which offers control only over amount, several of the preset treatments seem to combine reverb and some elements of delay ranging from a short ambience to a generous plate. If the Delay button is selected, the delay time can be varied from a short slap-back to around half a second using the DSP knob, though there's no tap tempo button, which I think would have been more useful for setting the delay time on the fly. Delay feedback, when the Regen button is engaged, may be adjusted from 10 to 90 percent, again using the same DSP knob. Any adjustments you make to the effects are retained when the mixer is powered down.

Auxes 1 and 2 have the benefit of three-band EQ plus a bypassable, variable-frequency notch filter to help avoid feedback when driving stage monitors, which is very considerate. The two aux levels are controlled by faders rather than rotary controls, as are the two effect return levels, with the pre-fader auxes also having an AFL switch, so you can listen to each monitor mix as you're setting it up.

One concession to the modern age is a basic USB 2 interface, for stereo recording and playback (in addition to the usual stereo phono ins and outs for the connection of an external audio device). The USB return can be switched between straightforward playback via a rotary level control, or coming back in on channels 11/12, where the stereo computer return would have access to the channel EQ and aux sends. By default, the stereo signal feeding the computer comes from the main mix, but it can also be fed from auxes 3 and 4 — which means you can use plug-ins running on a laptop as your send efffects.

The designers have also provided a second pair of mix outputs on balanced jacks, which can be used to feed the lows to separate speaker cabinets via an integral 100Hz crossover. Both the crossover on/off and the mix 2 output level are set from the master section. With the crossover active, Mix 2 carries the sub feed and the main outs work from 100Hz up. Normally the power amps would feed full-range passive speakers with crossovers built in, but this extra output option allows for system expansion via adding further active speakers or simply adding a powered sub.

Studiomaster are to be credited for making this mixer as straightforward to use as possible while still providing all the key features, plus a couple of useful extras. I have no complaints about the sound quality of the mic amps, and there's enough headroom as long as you are sensible about setting up the gain structure and not running the input stages too hot. I think the compressors are only useful if used very sparingly, but it's still good to have the option. The effects are also well chosen. Of course a maximum of nine mic inputs might be too much of a restriction for some users, but then there's always the bigger model.

One thing I missed was a delay tap-tempo button, and I'm also not sure what that strip of white LEDs is all about, as you still need to use the gooseneck lamp shining from above to see the controls clearly — maybe it's so the engineer can find the desk in a dark venue when he's making his way back from the bar?

The sound quality of the whole signal path is clean with a workmanlike EQ, and those useful extra EQ and notch controls on the monitor sends make a practical addition — as do the included light, footswitch and rack kit. While a nine-band graphic EQ isn't much help in sorting out specific feedback problems, it works perfectly well for mix sweetening or for matching the general character of the room, and having the option to drive a sub from the integral crossover adds to the flexibility. Certainly there's a lot to like here, and it's clear that a lot of thought has gone into making this mixer flexible but easy to drive. It isn't excessively heavy and yet it exudes a 'grown up' mixer vibe with enough power to drive most speaker cabinets.

The powered mixer market is pretty lively, with models of various powers, capabilities and prices available from the likes of Mackie, Behringer, Phonic, Yamaha, Dynacord, Peavey and Phonic. However, because there are so many small differences between mixer designs, finding one that is directly comparable in all areas is more of a challenge.

A well thought-out powered mixer for the gigging band.