Electric guitar is one of the most difficult instruments to recreate in sample‑based form. Sugar Bytes are the latest developers to brave the challenge. 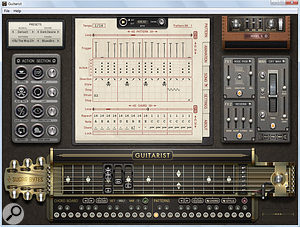 Sampled guitars can be tricky. Sometimes they work well. Sometimes, even with the most painstakingly multisampled, velocity‑switched libraries, they end up sounding a bit stiff and artificial. There have been previous attempts to tackle the problem by modelling the behaviour of guitars — and, more to the point, guitar players — in software, most notably Steinberg's Virtual Guitarist (reviewed in SOS December 2002 and September 2006). Sugar Bytes' Guitarist is in a similar vein, built upon large sets of guitar multisamples, with software mechanisms to mimic the interactions of pick, strings and fingers.

Guitarist is available for Mac OS X (10.4 or higher) and Windows (XP, Vista or 7), and runs as a stand‑alone application or a VST or AU plug‑in. The installer is a 500MB download, and you're provided with a serial number that must be entered during installation.

Guitarist's graphical user interface is very pretty and well rendered, with its various moving parts all smoothly animated. The main window is divided into several sections. In the top left are pop‑up menus for loading and browsing presets. In the centre of the display is a kind of piano‑roll display for a built‑in step sequencer. To the right are the effects and amp simulator. At the bottom is the 'guitar' itself, on which mechanical 'fingers' move about forming chord shapes as the instrument is played (either via incoming MIDI notes, from Guitarist's internal sequencer, or both).

Presets are sub-divided into four different types: Global, Sound, Pattern and Chord. Sound presets store settings such as the guitar type and selected effects. Pattern presets store the strumming and picking patterns — right‑hand activity, so to speak — while Chord presets store chord changes (left-hand activity). Selecting a Global preset automatically loads the matching presets in the other three categories. However, you can mix and match the different categories, combining the chord progression from one preset with the picking from another, and the effects settings from still another. User presets of all four types can be created and saved.

First impressions are positive. Several of the presets are impressively realistic, most are at least passable, and only one or two really clunk (the homage to 'Stairway To Heaven' is a bit painful). Guitarist is primarily a rhythm guitarist; although single‑note melody lines can be programmed, that's not really what the instrument has been designed for, and they're likely to sound a bit mechanical and lifeless.

Sample sets representing three different guitars are built in. Fender's famous Stratocaster and Telecaster are included, along with the rather less well‑known Duesenberg Starplayer Special, a Les Paul‑ish instrument with a fixed bridge and dual humbucker pickups. The Starplayer exists in 'Bright' and normal versions, while the Tele and the Strat have just one each (sampled from the bridge pickup in both cases, I would guess).

Extensive sets of fretted notes and open strings have been sampled, each one repeated several times. A 'round robin' function is used to alternate the playback of different samples in one of two ways. In Random mode, a sample is selected at random from the available pool for the note triggered. In Serial mode, the available samples for that note are triggered one after the other, before starting again from the top. Generally speaking, Random is the preferred option, since it better mimics the unpredictable variations of a real instrument performance. It's difficult to say, listening to notes in isolation, exactly how many different samples of each are provided, as the sample sets are stored in proprietary‑looking files with a '.sbr' suffix, so I can't open them up and count — but I'd guess it was four or five at least. (The fact that I'm not sure is probably a good sign: in practice, the samples don't sound as if they're too often repeated.)

Guitarist's strings can be manually detuned, although only by a semitone in each direction, so it isn't possible (for example) to use the 'dropped D' tuning favoured by some guitarists, though the detuning may be useful if you need to match Guitarist's output to an existing take with slightly wayward tuning. You can also put the whole instrument slightly out of tune with itself, for a little extra garage‑band realism. Double‑clicking a tuning head returns the string to its proper pitch.

A good selection of guitar‑oriented effects is built in. There are three different modules, followed by an amp simulator. The signal path is fixed and it isn't possible to patch the modules together in a different order. The effects are essentially insert effects, although there are Mix controls to adjust the wet/dry balance for 'FX 1' and 'FX 2'. FX 1 specialises in modulation effects, including a very nice Chorus, a good, throaty Phaser, and 'Phase Wah' and 'Auto Wah' effects, which are pleasant enough, if a little synth‑y to my ears. FX 2 does basic delays and reverbs, which are fine, and an odd reverse‑buffer delay effect, for the psychedelically inclined.

Next is a virtual wah‑wah pedal. This is more sophisticated than the average guitar stomp-box, with an integral, variable‑rate LFO to sweep the effect back and forth (this can be deactivated, and a MIDI controller assigned for manual control). The LFO can be set to retrigger with input signals above a given threshold (another way of producing 'auto‑wah' effects), and Max and Min controls allow you to set the upper and lower boundaries of the effect's sweep. In use, it sounds pretty good, although perhaps a little polite, not being quite as nasal or nasty as the real thing.

Finally there's the amp simulator, which has three modes. The first offers Volume, Tone and Drive controls, and is cleaner than the second, which has Drive, Volume, Low, Mid and High controls and can get much fuzzier. Both are simple but effective, providing convincing reproductions of real guitar amplifiers. The third mode ('DI Box') has just a volume control, forgoing any amp simulation so you can use third‑party effects instead. All of the effect parameters — and, indeed, most of Guitarist's GUI controls — can be controlled via MIDI (right‑click a control to activate MIDI Learn).

One Thing After Another 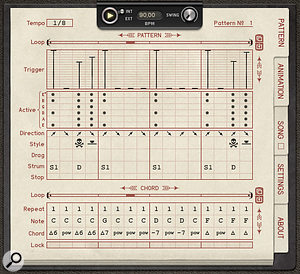 Guitarist's pattern sequencer provides the programming tools needed to make convincing use of its sample library.

To get down to the business of programming a guitar part, you need to turn to the pattern sequencer. This is the parchment‑coloured tablature roll in the centre of the screen. There are five tabbed pages here, labelled Pattern, Animation, Song, Settings and About. The first three are where you enter and edit sequence data for patterns and songs. (The Settings page is where various instrument preferences can be set.)

The Patterns page looks a bit complicated at first glance, but is actually very easy to use. There are four main 'lanes' of data running left to right. The topmost lane carries 'trigger' data. For each step, there's a vertical bar with a handle that can be dragged up or down to set the amplitude for that step (all the way down is off). The lane below allows you to toggle individual strings on or off for each pattern step. The default chord voicings use all six strings, but here you can exclude strings as required.

The bottom-most lane is where you choose the chord to be played for each step. A root note can be selected by dragging up and down on the appropriate field. You can choose one of 12 different chord types, such as 'major 6' or 'minor 7' from a pop‑up menu, and each type is available in three different fingering variations. You can also create up to 24 user chords by clicking on the fretboard. These are assigned to the typewriter‑style buttons below the guitar fretboard and can be triggered with MIDI notes or from the pattern sequencer. In addition to fixed chord shapes, the Animations page lets you program extra movements for each of the mechanical 'fingers' on the fretboard. A finger can be moved up or down by one, two or three semitones per step, to play (for example) a suspended fourth, or trills and ornaments.

The lane above allows you to choose what might be called 'articulation' effects for each step. These include the direction of the strum (up or down) and one of three Styles: the default is open strings, but alternatives are damping or muting with the heel of the right hand, and dead notes that are not fretted at all, with the strings muted with the left hand to produce a percussive noise. These are very effective, and with careful use of damping and dead notes it's possible to come up with choppy, funky rhythm guitar parts that don't sound at all programmed. A nice feature is the ability to use modulation wheel data to switch between these effects. For the first third of the wheel's travel, strings are open; the second third damps them; the final third produces dead notes. In this way, you can easily improvise and record variations in the phrasing of a guitar throughout a song.

You can set a step to Stop, which cleanly mutes the strings to stop a chord sustaining. You can also choose from one of several different 'Drag' effects, including vibrato, which sounds like a gentle wobbling of a guitar's tremolo arm, glissandos that slide up the fretboard to the target note, and smoother pitch 'glides', which can sound vaguely reminiscent of slide guitar. Another effect worth mentioning is the descriptively named 'Slow Down'. When triggered, this causes the rate of strumming to gradually decrease, so that the phrasing lazily winds down as it might at the end of a song. A simple effect, but convincingly guitarist‑like, and a difficult thing to program in a conventional sequencer. Finally, you can choose from one of three slower strumming speeds (Guitarist's default strum is pretty quick, the notes of a chord sounding almost simultaneously), or choose a double strum, which fits two strums within the space of a single step.

The resolution of the pattern sequencer can be adjusted. Possible settings are quarter, eighth and 16th notes, with their triplet variations, plus 32nd notes. The pattern remains the same length when the resolution is changed, playback becoming faster or slower relative to the master tempo. When running as a stand‑alone application, Guitarist provides its own internal tempo, and it will sync to a host application's tempo in the plug‑in version. When you've programmed a few patterns (up to 24 can be stored), you can switch between them either by sending MIDI notes (patterns are assigned to keys on the on‑screen pattern keyboard), or use Guitarist's own Song sequencer page to co‑ordinate pattern changes. Sequencer patterns can be dragged and dropped onto the host sequencer, or to the desktop, and saved as MIDI files.

This all sounds a bit complicated, but it's actually very easy to work with. With half a dozen mouse clicks, you can quickly build up a pattern of changes that sounds a lot like something a guitarist might have played — and, more significantly, doesn't sound too much like what a keyboard player might have programmed.

Guitarist is cleverly thought‑out and well‑implemented. It's not perfect: the built‑in effects are useful, but unremarkable, and its built‑in sample sets are good, but perhaps a little samey. However, the easy muting, damping and variable, choppy strumming functions can really bring a guitar part to life.

A clever and detailed emulation of the mechanics of (rhythm) guitar playing. Not foolproof, but capable of very believable results when used with care.