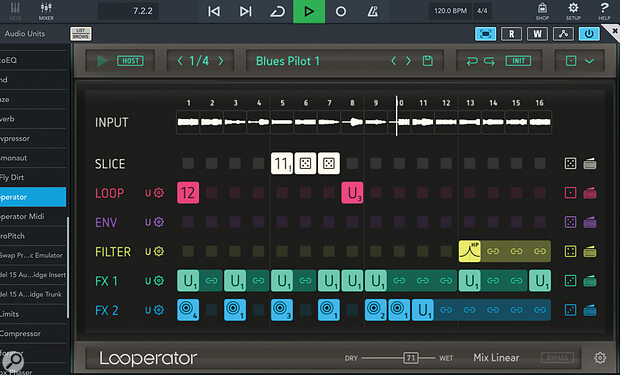 Sugar Bytes have acquired a loyal following for their undoubtedly leftfield, quirky and sometimes just a bit bonkers line of desktop plug‑ins. To their credit they're one of few desktop developers who have fully embraced the mobile music-making environment, and they've brought many of their popular desktop plug‑ins to iOS.

The latest to undergo this journey is Looperator, a 'free to try' download from the App Store, whose full feature set can be unlocked if you like what you see/hear via an in-app purchase. The app requires an iPad running iOS 12 or later, and works both standalone and as an AUv3 plug‑in. MIDI Learn, Ableton Link and cloud-based preset sharing are also supported.

As far as I can see, the iPad version of Looperator is pretty much a complete port of the desktop version I reviewed in SOS November 2015 (https://sosm.ag/sugar-bytes-looperator). To recap the underlying concept, you feed Looperator an audio source, which it will then slice into 16 steps. For each step, you can apply a series of effects that include filters, stutters, slices, distortion, tape stops, volume modulation and looping. Based on whatever step length you specify, the pattern of step-based effects is then cycled in sync with the tempo (of the standalone app or your AUv3 host) while playback of the audio source (live or pre-recorded) continues. It is, frankly, super cool, and particularly good for creating rhythmic effects to spice up your latest electronic music mix.

The iPad version of Looperator is pretty much a complete port of the desktop version.

As on the desktop version, the main display shows the waveform of your incoming audio and the six available 'lanes' of effects that can be applied. Each lane focuses on a specific collection of effects and, at any step, your audio is processed from top-to-bottom in the effects chain. Lanes can be reordered, though, and you can also adjust the wet/dry balance in various ways. There's an impressive range of general presets to get you started, as well as presets for each of the various effects types. However, you can also define your own user effects in each lane. As this seems to be a pretty complete port, interested users might want to dip into the SOS archives and read the more in-depth desktop review, but the bottom line is that Looperator provides a huge range of creative effects options.

While the functionality of the plug‑in mirrors that of the desktop, the experience of using it on an iPad under iOS is rather different, of course. First, I experienced absolutely no problems using the app either standalone or as an AUv3 plug‑in hosted by Cubasis 3.1. The UI is very nicely designed, and there are plenty of things to touch; if your AUv3 host allows you to switch it to a full-screen display as you tweak (as Cubasis does), exploring Looperator's many creative options is a much more satisfying experience.

Beyond that, I can only repeat what I said when reviewing the desktop version. While Looperator can do subtle if required, it excels in those attention-grabbing special effects that provide a production-style sonic hook for your track. In this role, it's a heck of a lot of fun. It might not appeal so much to singer-songwriter types, but if your musical muse lies in any form of electronic music, and you like to spice up your mixes with some creative effects, Looperator is well worth exploring.