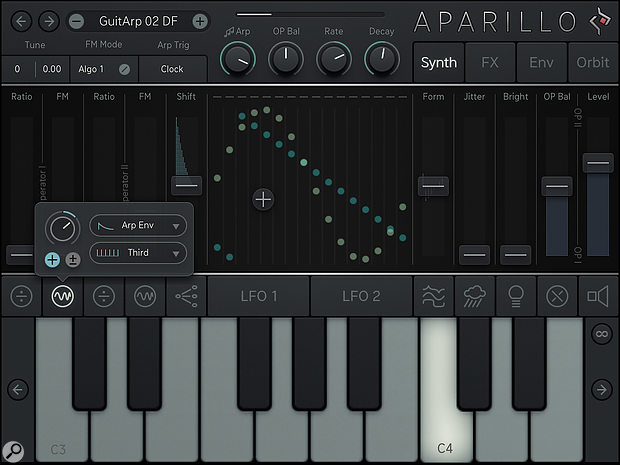 There's nothing wrong with conventional tools but, whether it's on the desktop or for iOS, Sugar Bytes tend to create virtual effects and instruments that are a little more 'out there'. Their latest software synth, Aparillo, most certainly meets that description. Available in both desktop and iOS forms, it's the iPad version I've been testing. On one level, it's a twin–oscillator FM synth, but there are some interesting oscillator options, a unique arpeggiator (well, a sort of arpeggiator), and a modulation section that offers something more than a little different — Aparillo is aimed firmly at those who like a more experimental approach to sound design.

Let's begin with some basics. Under iOS, Aparillo is iPad-only, requires iOS 11.0 or later and is a free-to-try download. If you like what you see, then the full version can be unlocked via a £17.99$17.99 in-app purchase. The app operates both stand-alone or as an AUv3 plug-in. Ableton Link support and a full MIDI spec, with MIDI learn and host-based automation, are also included. Presets can be sync'ed to the desktop version if you happen to own both, and the app comes with an impressive collection of 500 presets to get you started.

The Orbiter... can influence up to 15 parameters at the same time, and the potential for real-time sound control is truly impressive.

The underlying engine provides two FM synths that can interact/modulate each other in various ways. Each synth offers 16 voices, so you can create some complex timbres, and the engines include options for wave-shaping, filters, some interesting effects and — star of the show — some really wild modulation options, which are built around an 'Orbiter' display. This provides you with an X/Y surface on to which you can place multiple modulation targets. These are modulated by the Orbiter (essentially a cursor) as it 'orbits' around the screen, exerting a greater influence on the selected parameters as it moves closer to them. The result is a single control that can influence up to 15 parameters at the same time, and the potential for real-time sound control is truly impressive. 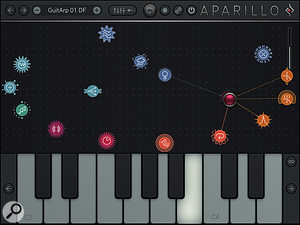 Also cool is the 'arp that's not an arp' feature. This is actually more of a scale-based note generator and is capable of creating some hypnotic (very Stranger Things) melodies as well as veering off into sound-design territory. Indeed, the latter application is something Aparillo is very well equipped for — and while you can easily coax some conventional synth sounds out of it, I'm sure that's not really what Sugar Bytes had in mind when creating this. Indeed, the app is arguably not a place for the faint-hearted: this is a deep engine, with all sorts of complex and quirky elements. But if you like your synths to fight back a bit before you master them, Aparillo will be right up your street — and your journey along the learning curve will be well rewarded sonically.

There are some great sounds to be had and, having now tried the iOS app, I'm very tempted to acquire the desktop version too. I can't claim to have done more than scratch the surface of what's possible with Aparillo yet, but for electronica or for media composers wanting something that crosses a playable synth with a sound-design tool, it is definitely well worth exploring.