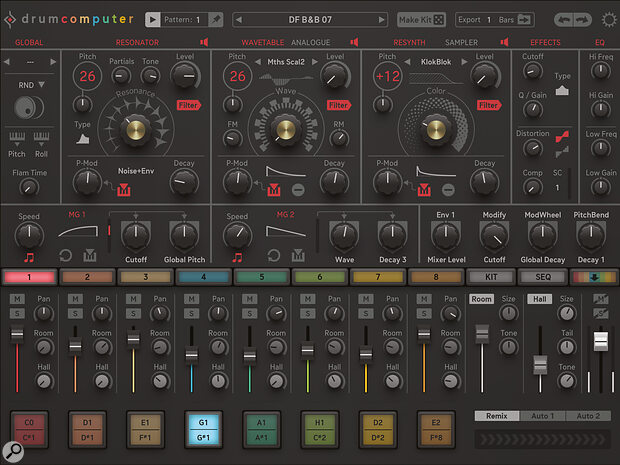 DrumComputer requires some time to master but the depth and power pay off with some seriously good sounds and huge creative potential.

Sugar Bytes’ impressive virtual instrument product line — whether on desktop or iOS — never fails to combine the deep, powerful and creative with just a touch of madness. As such, they might not be to everyone’s taste but, if experimental electronic music making is what you do, then a dollop of Sugar Bytes might well be in order.

DrumComputer for iPad is a full port of the desktop instrument. That means you get an eight‑channel drum synthesizer (eight separate engines layering resonator, wavetable/analogue oscillator and resynth/sampler sound sources with an impressive collection of presets), choke group configuration, powerful modulation options, filter, compressor, overdrive, reverb and mastering effects, a 16‑step pattern sequencer with multiple controller lanes for each of the eight drum channels, humanise and swing, comprehensive sound and pattern randomisation, fill generation, and MIDI and audio export. For this iPad version, the app can run standalone or as an AUv3 plug‑in and includes Ableton Link support as well as MIDI Learn and host‑based automation.

If that already sounds like a lot of features, then the somewhat ‘busy’ nature of the interface will come as no surprise; minimalist it is not. You can access the different areas of functionality via the tab buttons that run across the screen just below its centre. This includes the detailed synthesis engine controls for each of the eight channels of sound synthesis, a ‘kit’ overview with some sound macro controls (and sound randomisation options), the Sequencer page and (via the ‘stripy downward arrow’ button) the pattern and sound mapping controls for triggering via MIDI. There is a heck of a lot to get your head around; this is a deep and powerful instrument.

However, before you get intimidated by what is undoubtedly a steep learning curve, exploring the presets without touching anything else will quickly convince you that this is a seriously capable drum synth. However, given the comprehensive set of full kit (with patterns) and sound presets, if you start by just exploring the hugely creative, and often inspiring, range of randomisation options — for full kits, individual sounds, patterns and modulation — you might never need to do more than fine tune a few parameters to taste.

DrumComputer for iPad captures everything that is so characteristic of a Sugar Bytes product.

DrumComputer for iPad captures everything that is so characteristic of a Sugar Bytes product. It’s head‑scathingly deep, amazingly powerful, sonically impressive and massively creative. And, despite being just slightly mad, it’s enormous fun to use. For EDM, any form of electronica, or modern film and TV soundtracks, it would make a great addition to any producer’s toolkit.

It will not be for every iOS music maker but, as it’s a free download (with an IAP to unlock the full feature), at least everyone could give it a try. This is as much fun as I can ever recall having with a drum synth. DrumComputer for iPad is fabulous stuff... indeed, so good that I’m now off to buy the desktop version.

DrumComputer for iPad is typically Sugar Bytes; powerful, hugely creative and with more than a hint of madness. There is undoubtedly a learning curve but EDM music makers will find lots to love.