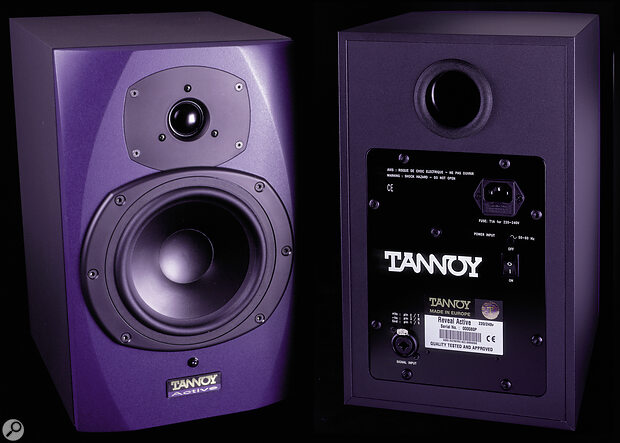 We check out Tannoy's contender in the low‑cost active studio monitor stakes.

At one time, active monitors used to be an expensive luxury, but recently we've seen the cost plummet as more manufacturers gear up for the project studio market. I've already tested a number of these wallet‑friendly actives and I have to say that some of them are surprisingly good. Now Tannoy have joined the race with the Reveal Active nearfield, and they've produced it at such a competitive price that it even undercuts the Alesis M1 Actives I reviewed in April, making it the least costly powered monitor of its type that we've yet reviewed.

Tannoy's main business is in dual‑concentric loudspeakers (the type where the tweeter is located in the centre of the bass driver) — the idea behind these designs is to produce a point source of sound so as to eliminate off‑axis phase errors. This is a laudable aim, though I've always felt that Tannoy dual‑concentric monitors have an identifiable sound rather than being completely neutral. Nevertheless, Tannoy do make a number of conventional 'woofer plus separate tweeter' models, and like the passive Reveals reviewed by Hugh Robjohns back in August '98, the Reveal Actives fall into that category.

Tannoy have a strong manufacturing advantage in that as well as building their own drive units, they also have a highly automated cabinet manufacturing plant, which enables them to maintain a high level of quality at a very keen price. The Reveal Actives are presented in strong, attractively styled cabinets with a contoured, metallic turquoise baffle, shaped to avoid cabinet edge diffraction. The cabinet size is a compact 340 x 210 x 260mm and seems identical to that of the passive model other than the baffle colour. A blue LED below the woofer indicates the monitors are powered up.

The one‑inch soft‑dome tweeter is recessed so that its backplate is flush with the baffle, while the 6.5‑inch woofer has a profiled surround with radiused edges. At its thickest point, the baffle is 40mm (over one and a half inches) thick, the bass port is located on the rear of the cabinet to reduce the effect of port noise. The rest of cabinet is made from 16mm MDF with a grey textured finish.

Both drivers are magnetically shielded, and they're also mounted very close together to minimise phase effects caused by listening off‑axis. Few details are provided concerning the construction of the drivers themselves other than their names, rank and part numbers, though the woofer features a synthetic cone material in a roll surround, the centre of the driver being protected by a concave dust cap.

The MOSFET amplifier pack is inset into the rear panel and connected to the outside world via a balanced combi XLR/jack socket. Mains comes in via a Euro‑socket and power switch — there are no frequency‑tailoring switches or level adjustments. Driving the woofer and tweeter are separate 50 Watt power amplifiers fed from a 3kHz active crossover, producing a maximum SPL of 114dB with a frequency response of 62Hz to 20kHz. Though this means little without the number of dBs rolloff being included, a frequency‑response graph is included in the manual, which shows a nominally flat response with just a slight hump at around 80Hz due to the port tuning.

The listening tests were conducted with the speakers mounted on stands at about head height in a typical 12 x 13ft domestic room, such as might be used for home recording. Passive ATC SCM20s were used as a comparison. I have a collection of CD tracks compiled on CD‑R that I use as part of my standard listening test, and these showed the Reveal Actives to be very detailed and open sounding. There's adequate bass extension at moderate listening levels, though less so than from the Alesis M1 Actives reviewed last month, and considering these are active monitors, some may consider the balance a touch bass‑light. I also felt the overall sound was just slightly edgy in the region of the crossover frequency. This probably isn't enough to offend most users — I've reviewed monitors that are far more forward‑sounding than these — but it can make things like snare drums and hi‑hats sound a hint splashy.

In the context of nearfield monitoring, the Reveal Actives are plenty loud enough and the sound seems to hold together pretty well up to and beyond the level at which close listening becomes uncomfortable. The useful listening angle is more than wide enough, and positioning within the room isn't as critical as it is for some monitors I've tried, though portrait rather than landscape mounting is recommended. The wide angular dispersion also translates into good stereo imaging.

Given their very attractive price, the Reveal Actives are actually very good performers, their only weaknesses being a slightly shy bass end and a marginally over‑emphasised presence. On the plus side, the speakers provide a very detailed interpretation of a mix and also handle vocals well. They also seem to work well in domestic rooms that haven't had the benefit of acoustic treatment, plus you don't have to sit in exactly the same spot every time to hear a decent mix. I'm also impressed with both the build quality and the styling, so if you're watching your budget but want to go active, then you shouldn't hesitate to try these.

The Reveal Actives are about the most inexpensive active monitors you can buy, yet they still perform well enough to use for quite serious mixing work. Probably best suited to small studios or rooms that are naturally bass‑heavy.