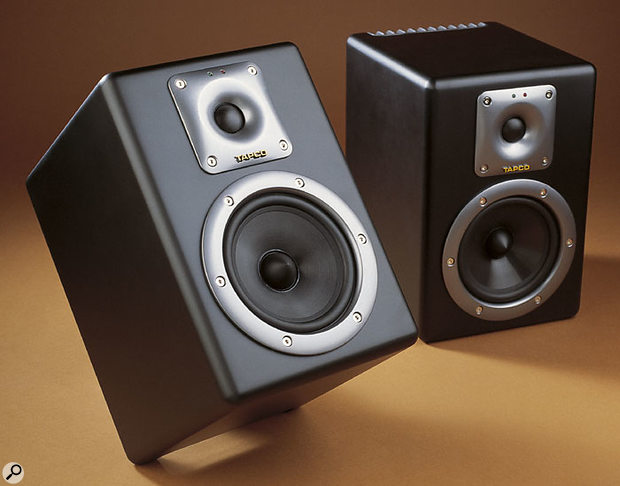 Despite their compact size, these affordable active nearfields deliver a large-scale sound.

Tapco was the name of a company set up by Greg Mackie back in 1969, when, working from his garage, he developed a line of small, attractively priced mixers designed primarily for live sound. The name Tapco has now been resurrected as the new 'Tapco by Mackie' product line. To keep the costs low, the design work is carried out in the US, but the manufacturing is done in China, where labour costs are very much lower. There are already some new mixers in the new Tapco range, but these have been joined by the S5 active nearfield monitors, designed to offer a cost-effective alternative to the more up-market Mackie HR-series monitors. It's also hoped that their small size and slick styling will appeal to the home theatre market, which is important, because to make Chinese manufacturing pay off you need to deal in very high volumes of product.

This ported two-way active design features a rear port, a one-inch silk-domed tweeter, and a 5.25-inch, polypropylene-coned bass/mid-range driver with a steel chassis. An electronic crossover operates at 4kHz with a 24dB/octave slope — the use of a small driver means that the crossover frequency can be higher than the more usual 1.8-2.5kHz, which helps keep any crossover artifacts away from critical mid-range sounds such as vocals. Both drivers have their own 60W (100W peak) power amplifiers and, measured free field (away from walls and other boundaries), the frequency response is 3dB down at 64Hz and 22kHz. The nominal sound pressure level (per pair) is quoted as 100dB, with a peak SPL of 113dB.

Although physically small (11.3 x 7.6 x 9.1 inches), the S5s are massively constructed from 5/8-inch MDF with a 3/4-inch-thick front baffle. The corners are all rounded, and the enclosure is finished in a tough black coating. Inside the cabinet, damping is achieved using high-density adiabatic foam, and both drivers are magnetically shielded, permitting use close to CRT monitors. The drivers are neatly recessed into smooth moulded surrounds fixed to the baffle, and the tweeter surround, which incorporates the waveguide, includes power and overload LEDs.

At the rear of the cabinet is a flush-mounting metal panel, finned at the top, with an integral slot-shaped bass port at the bottom. This doubles as both a heat sink and connector/control panel. Power is via a regular IEC connector with adjacent mains switch, and there's a slide switch to select 120V or 240V operation. It's as well I checked these, as one of the speakers was set up for 120V operation — however, as this was a review pair I can't say who had them last! The signal input can be connected using a balanced XLR, a balanced quarter-inch jack, or an unbalanced phono, and there are two sets of slide switches for tailoring the frequency response to suit the room and user preferences. 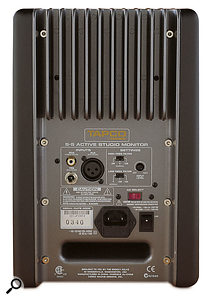 Photo: Mike CameronThree low-end settings are available, giving 2dB or 4dB of lift at 65Hz (peaking rather than shelving) as an alternative to the normal flat response. At the high-frequency end, 2dB of either cut or boost may be switched in at 5kHz (shelving) if the flat sound doesn't suit you. Bass boost would normally be required only if the speakers were used well away from walls or if the room had natural bass trapping characteristics. A pragmatic way to set these switches is to see if your mixes are consistently too heavy or too light at either the high or low end. For example, if your mixes are too bright when played back on other systems, this suggests that your monitoring isn't bright enough, in which case you could use the top boost setting. Similarly if your mixes are bass heavy, try boosting the bass setting on the monitors, as this will push you towards mixing with less bass.

Despite their small physical size, the S5s don't have a small-monitor sound unless you push them too hard, in which case a slight boxiness creeps in. They deliver plenty of punch for kick drums and bass synths, though they don't have the kind of bass extension that allows you to really feel sounds as well as hear them. Even so, there's nothing thin or lightweight about the sound at all, and when I first switched them on I quite forgot that I wasn't using my main monitors.

Once you have the frequency switches set optimally for your room and monitor position, the overall spectral balance is actually very good, with a comfortable but reasonably revealing sound. The stereo imaging is also good, as you'd expect from physically small speakers, but if I were to be picky, I'd say that the impression of depth and clarity wasn't as good as with Mackie's HR speakers. You can't hear quite as far 'into' the mix, but then the HR-series speakers use a metal tweeter, which tends to make them sound slightly forward by comparison anyway. Nevertheless, the overall sound is very workable, with a smooth high end and no perceived hardness or honkiness to the tone.

These monitors retain their quality of sound up to moderately high listening levels, and only start to lose their integrity when pushed hard. They may not suit reggae bands or anyone working on club-level dance mixes, but in a small to medium home studio situation, they work perfectly well.

Despite being conceived as a budget alternative to the Mackie HR monitor range, the S5s are beautifully designed from a cosmetic viewpoint, incredibly solidly put together (they weigh 15.5lbs each) and they deliver a nominally accurate sound that is free from serious vices. Clearly there must be compromises with a monitor of this size and cost — the bass end drops away quite rapidly below the traditional kick-drum frequencies, the overall 'focus' isn't quite the equal of expensive monitors, and the maximum SPL is lower — but there are no compromises so serious that you can't make great mixes on them. They do a workmanlike job of interpreting a mix, which is ultimately what counts, and they don't sound at all like small monitors. I also found the sound comfortable to work with, which is very important when monitoring for long periods. If Mackie manage to maintain this quality/price ratio with all their new Tapco offerings, I foresee the range doing very well for them.

The S5's combine good overall performance with a sensible UK cost. Although you can obviously buy better monitors if you have the budget, these will allow you to make well-balanced mixes in a typical project studio.