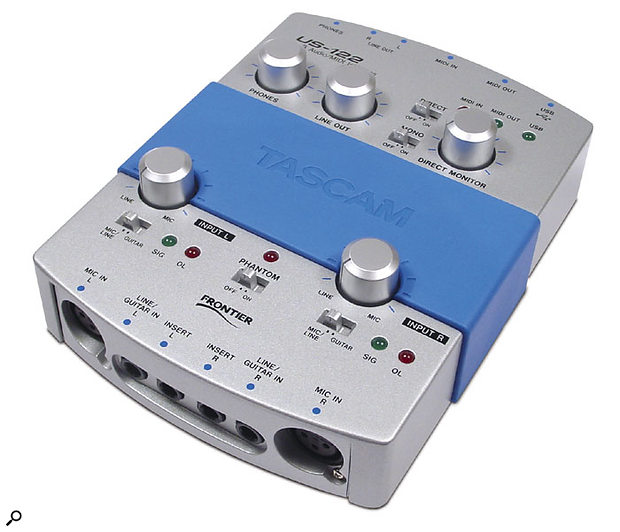 The baby of Tascam's US range of interfaces dispenses with its big brothers' control faders, but does boast stereo audio I/O with phantom power supplied over USB, as well as MIDI I/O.

The US122 is the newest addition to Tascam's increasingly comprehensive range of USB audio interfaces, and aims to provide "portable, easy to use, professional recording capabilities for Mac and Windows laptop or desktop recording/production systems". To this end, it offers two-channel audio I/O at up to 24-bit, 48kHz with phantom-powered mic preamps, plus single MIDI In and Out ports.

Measuring just 196mm by 149mm and weighing in at less than a kilogram, it's a solid, pleasing little box, which gives the impression of being sturdy and well built. The top panel is home to five chunky knobs controlling headphone and line out levels, 'direct monitor' volume (for very low-latency monitoring of input signals), and input gain (trimmable from line to mic level) for the left and right channels. There are also switches to activate a high-impedance mode on both inputs so that guitars and basses can be DI'd, and a switch to supply phantom power to any mics that may require it — which is impressive given that the US122 is fully host-powered and requires no mains adaptor of its own. Also on the top panel are various LEDs, which light up to indicate a successful USB host connection, MIDI activity in both directions, and the presence of an input signal (with a clip warning).

Set in the front panel are a pair of balanced XLR connectors, a pair of quarter-inch jack inputs for guitar or line signals, and another pair of inserts which can be used to hook up an external compressor or limiter across the inputs. The back panel features a standard USB connector, MIDI In and Out ports, stereo analogue RCA connectors and a quarter-inch headphone jack.

The US122 supports just about every computing platform in common use. The ASIO (16 and 24-bit drivers are supplied), MME and WDM standards are supported under Windows (98SE to XP), while ASIO, Sound Manager and Core Audio are supported under Mac OS (8.6 to 9 and 10.2.3 or later). A reasonable selection of software is also supplied with the bundle. A limited but usable build of Steinberg's Cubasis VST is provided for Windows and Mac OS 9 users, while Windows users also get a version of Tascam's Gigastudio 24 package to play with. Mac OS X users are slightly less well catered-for, but a proper Core Audio driver is very welcome nonetheless.

In the past I've heard concerns expressed about the reliability of USB audio and MIDI devices, and about whether the USB 1 protocol in general is capable of reliably handling the simultaneous transfer of audio and MIDI data. Tascam themselves acknowledge this as at least a theoretical issue, and actually provide users with the option to disable the US122's audio capabilities for situations where large quantities of MIDI data need to be transferred and accurate timing is critical. It's sensible, of course, not to load up your system with lots of other USB devices when recording, since bandwidth on the buss is undoubtedly finite. Similarly, if you expect to be dealing with dozens of simultaneous stereo audio tracks on a regular basis, it might be worth considering a Firewire or PCI device in preference to a USB one.

That said, my experience was that US122 worked well, and was quite reliable. I think it's unlikely that many users will run into serious problems in the normal course of their work; in my experiments with the bundled Cubasis VST application I found the US122 quite capable of handling eight audio and a dozen MIDI tracks at once without any noticeable undesirable side-effects.

USB devices are typically 'hot-swappable', in that they can be safely connected and disconnected without the need to restart your computer. This applies equally to the US122, although it actually pays to be a bit careful about it. Unplugging the device with Cubasis still running, for example, will completely freeze the application, often (ironically) necessitating a restart. This is perhaps because the software uses the US122 as a kind of copy-protection 'dongle' and actually won't run without it attached. In any case, quitting Cubasis before disconnecting the interface avoids the problem.

The only other glitch I encountered occurred when I inadvertently allowed Windows to put the laptop to sleep after a period of inactivity. On reawakening, the US122 seemed not to be responding, and launching Cubasis caused the system to hang. Whether this is technically a problem with Windows or with Tascam's drivers, I have no idea. Either way, it's easily solved by setting Windows' power options so that the system is never put to sleep.

I've been exclusively Mac-based for several years now, and so it was with a certain amount of trepidation that I set out to test the US122 with an Athlon laptop running Windows XP. I needn't have worried, however, as installation proved to be a quite painless procedure. After first installing the drivers from the supplied CD, I attached the US122 to a spare USB port and the Windows Wizard leapt into life to complete the process. A couple of dialogue boxes later I was all set. 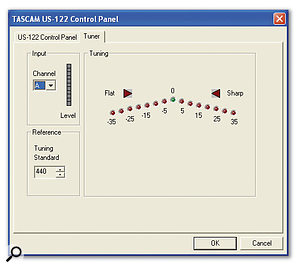 An added bonus in the control panel is a simple guitar tuner.Installing the supplied software was the next step (see the Software box). Cubasis took just a few moments to set up, and found and recognised the US122 as its preferred device for MIDI and audio without any complaints. Experienced Cubase users will find Cubasis VST superficially familiar, if quite stringently simplified. New users will find the clear, well-written PDF documentation helpful, and should be able to get started with basic recording and sequencing without any problems. Gigastudio took rather longer to install (pleasingly, the final installer dialogue makes a point of thanking you for your patience) and is rather less well documented. It's a powerful application, however, and Windows users will doubtless be glad of it while Mac users are left cursing under their breath.

Also installed is the US122's control panel application, which allows easy buffer size adjustment so that you can experiment with finding the optimum latency for your system (the hardware-based Direct Monitoring feature is unaffected by this setting, however, and should always be less than 1.5ms). As an added extra, the control panel also features a simple but useful chromatic guitar tuner.

You are not, of course, limited to using the supplied software. Pretty much any audio application supporting one or more of the standard driver protocols should be able to make use of the US122, and I tested it extensively with Sonic Foundry's Sound Forge Studio 6.0 without any problems. 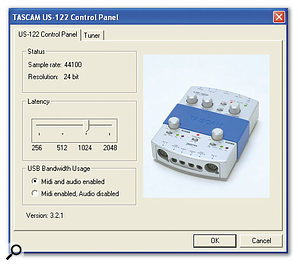 The US122's control panel allows you to adjust the buffer size for a suitable latency value.The US122 supports recording at sample rates of 44.1 and 48 kHz, and both 16- and 24-bit. However it's worth pointing out that even though a 24-bit ASIO driver is supplied, the bundled version of Cubasis can only manage 16-bit operation. To get the very best out of the interface, therefore, you'll need to be using Cubase 'proper' or another 24-bit-capable application. That said, I found the sound quality of 16-bit recordings made in Cubasis to be very respectable, and the US122 performed well throughout. Direct Monitoring proved itself to be a useful feature, since with the buffers set high enough to eradicate crackle in my recordings, the software latency was certainly long enough to be distracting.

The US122's MIDI ports worked as expected, with no unpleasant surprises. In the course of my experiments I didn't notice any problems with MIDI timing, even with Cubasis running its full eight audio tracks — although higher audio track counts in other applications might theoretically cause problems in some circumstances (see the USB Issues box).

Overall, the US122 gave me so little trouble that I find myself slightly short of things to say about it! Once installed, it pretty much just gets on with its job, and you soon forget it's there, which is probably how it should be. Its small size and rugged construction will doubtless recommend the US122 to laptop-based mobile producers and performers, while its ability to power itself and even to phantom-power mics without the need for an external PSU will be a bonus for people wanting to travel light. Equally, its small desktop footprint and combined MIDI and audio interfaces could make it an attractive solution for (for example) iMac-based home studios where an external device is a must and space is at a premium. 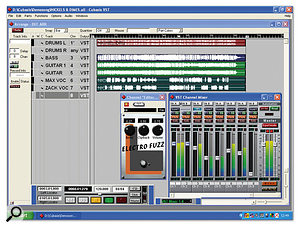 The US122 ships with a dedicated version of Steinberg's Cubasis VST sequencer.The software bundled with the US122 is a nice bonus, if perhaps not a compelling selling point. The supplied version of Cubasis VST serves as a straightforward if rather basic MIDI sequencer, and a usable tool for eight-track digital recording. However, it offers only limited audio editing facilities, and while its support for VST (and, under Windows, Direct X) effects is a point in its favour, incompatibility with VST Instrument plug-ins is something of a shortcoming.

Windows users are compensated by the inclusion of a (presumably limited) 'Bundle Version' of Tascam's (formerly Nemesys's) Gigastudio 24 sample playback package, which can be used in conjunction with Cubasis or any other sequencing packages you have installed. Like Cubasis, the bundled version of Gigastudio requires the US122 to be attached in order to run. Patient users will probably find Gigastudio a worthwhile addition to the bundle, but Gigastudio novices like me are likely to struggle at first: no paper manual is supplied and the electronic documentation is frankly a bit lacking.

A no-nonsense two-channel audio and MIDI interface, equally suited to laptop and desktop use. Not the most powerful or flexible I/O solution on the market, but solidly built, functional and well worth considering.