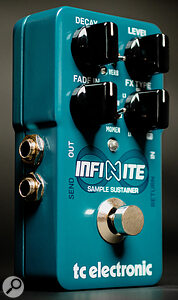 he idea behind TC’s Infinite Sample Sustainer pedal is to allow the user to sustain notes or chords indefinitely, with the ability also to add new layers to existing sustained notes and still play a melody over the top in real time. The idea isn’t entirely new: we’ve seen the EHX Freeze and Ego pedals, for example, and Gamechanger Audio’s Plus Pedal can also achieve indefinite sustain. But TC Electronic’s Infinite goes a step further by integrating reverb, based on the company’s well‑respected Hall Of Fame pedal, and this can turn sustained parts into really dreamy pads.

The sustain effect is engaged using the footswitch, which can be set for latching or non‑latching operation. To kill a sustained part, you just hit the pedal twice. There is a bit of a knack to getting smooth results but it soon becomes second nature. Essentially, you have to wait for a fraction of a second after playing a note, so that the short loop on which the sustain is based doesn’t capture elements of the note attack.

By way of connectivity, alongside the mono in and out jacks, there’s a second set of jacks that function as an effects loop, so that other pedals can be brought into play to process the sustained sound. You could also use the loop out to feed the sustain‑only sound to a different amplifier. The control set is fairly straightforward, with knobs for Decay, Level and Fade In affecting the sustained sound only, plus a rotary switch for selecting the effect type. Small toggle switches select between Dry or Reverb and Latch or Momentary operation.

There are four preset effect mode choices plus three more slots into which you can load TonePrint variations via the free TonePrint app, to allow editing beyond what is available from the front‑panel controls. Within the TonePrint editor the various reverb and send/return levels can be adjusted as well as the level of the sustained sounds relative to the live sound, and there’s the option of a Kill Dry mode. Also included is the option to set different amounts of reverb for the sustained sound and the real‑time dry sound. TonePrint allows for the selection of different reverb types, with deep editing, and there’s also a full modulation section for the sustained sound that includes flanger, chorus, vibrato and so on. 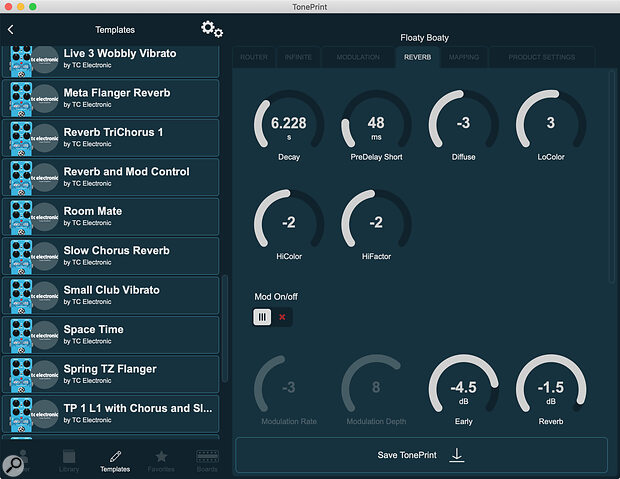 The Infinite Sample Sustainer can be used with TC’s TonePrint app, which allows deeper editing than you can achieve via the front‑panel controls alone.

Those factory effect modes determine how many layers you can add before the first layer is overwritten, with options for one, two or three layers plus an infinite layer setting. The single‑layer setting is useful if you simply want to change chords, whereas the layered options allow you to build up pads one note at a time. A TonePrint option allows the level of existing sustained parts when using Infinite mode to be dropped in level by a user‑adjustable amount whenever a new layer is added — this helps to avoid an uncontrollable build‑up. There are also High and Low EQ options for the sustain tail.

Several hours after I first plugged a guitar into the Infinite, I finally stopped playing with this pedal. I’d long since concluded that it is an ambient musican’s dream! The looped nature of the sustain sometimes adds a very slight modulation to guitar sounds, which take on a pad‑like quality, but the result remains very smooth and easily disguised by adding some reverb and/or modulation. The pedal is simple to use, and having such flexible sustain options combined with reverb and modulation in such a compact, affordable and deeply editable pedal is beyond impressive. If you aspire to become the Ed Sheeran of ambient music, this is the way to go.